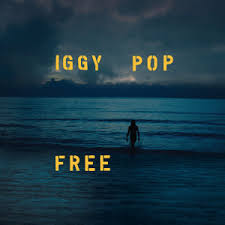 Iggy Pop returns with his follow up to 2016’s Post Pop Depression. Described as a more “reflective” album, Free finds the Godfather stretching his sound once more. Simon Tucker reviews.

There was something of a finale feeling to Iggy Pop’s 2016 album Post Pop Depression. You got the sense that the iconic singer was tying up some loose ends before retiring to his beach home to enjoy some well earned rest. Could any of us fans have blamed him if this was to be the case? Iggy has given us his body and soul since the 1960’s. He’s cut himself for our pleasure and fractured his psyche with addiction. If you watch the 2017 film American Valhalla which documented the albums creation and subsequent tour you would have seen a man who suffered visible pain and someone who when off stage still carried his lionheart glow but whose body was every bit the body of a man in his 60+ years. Add to that the thematic and sonic throwback to his glorious one-two Berlin albums and the sudden death of his friend David Bowie on the eve of his first tour rehearsal and the sense of artistic retirement was palpable. At least we had his 6Music show

And then there was Free…a suddenly announced album with the title track being released as the lead single. What was Free? Free was a floating ethereal jazz cut with Iggy repeating the phrase “I wanna be free”. Iggy’s voice when slowed down and purposeful is a magic trick. It is the sound of the divine and of the dirt. Authoritative and attractive. Free was a swerve from Post Pop Depression. The mournful trumpet of Leron Thomas married perfectly the album cover image we were given with Ig walking into the sea before the sun has woken the world up. It was also impossible not to feel a link towards his departed friends final masterwork Blackstar. As opening statements go it was exciting and intoxicating…would we be getting another Iggy album like the underrated Préliminaires? That would be most welcome indeed..

So that sense of intrigue continued with the marmite next single James Bond. Here the Godfather was obviously having fun with a slice of 60’s Parisian pop. Crooning and winking throughout. Many have commented on how much they have enjoyed the song with an equal amount of commentators expressing their dislike for it. What can be said after listening to the album is that James Bond is an anomaly and is the most disposable song here and whilst I land in the former camp, the ones that like the song, it does feel like the weak link in what is a very strong collection of songs and an album that will rank in the top half of best-of-Iggy lists and certainly tops its 2016 predecessor.

If we were to go back into Iggy’s past for comparisons then Free would be his modern day The Idiot compared to PPD’s Lust For Life. Like that revered album, Iggy surrounds his voice in different sonic textures that don’t for the most part fit into the “rock” format. The guitar of Sarah Lipstate aka Noveller is beautiful throughout, painting soundscapes that bring forward a gorgeous sense of melancholy on songs such as album highlights Page and Sonali. Then there is the trumpet of Leron Thomas. Thomas punctuates the album at points that help highlight the aged beauty in Iggy Pop’s voice and is the central emotional tool of the album. Listen to We Are The People (a Lou Reed poem) where Iggy speaks to us directly, his voice central and huge. This song would not have the clout that it does without Thomas’ trumpet flying around, blowing a reflective wind around the piece.

Free is one of Iggy Pop’s most well produced albums and it is soaked in an ambience that is evocative. Listen as synths and distant thuds paint a grand canvas around The Dawn or the way the album allows random technical crackles and pops on Glow In The Dark which at first threatens to be another James Bond before it slowly gets more experimental and cosmic..then in comes those trumpet and guitars again. The bolder Free gets the better it sounds and it is only on tracks like James Bond and Dirty Sanchez where Iggy gets back to his rawk-star persona and the music gets more traditional where the album falls down. Dirty Sanchez also features the most problematic lyrics on the album (courtesy of Thomas) and it is a shame to see this regression on what is otherwise a truly great Iggy Pop album.

Free may have its faults but they are few and far between. Overall the album is one of his finest produced and atmospheric. It showcases Iggy Pop’s voice wonderfully well and is full of a melancholy that exists within us all. Free is bold, funny and full of unexpected twists and turns. It is music for the late night or very early morning. It is built for the gloaming and for deep contemplation. This is Iggy singing and talking to us with his glasses on. The fact that it isn’t perfect is neither here nor there as Free represents the true trailblazer that Iggy is and with the music of Novelller and Leron Thomas painting such vivid and gorgeous pictures, Free is an album that will warrant many a listen.