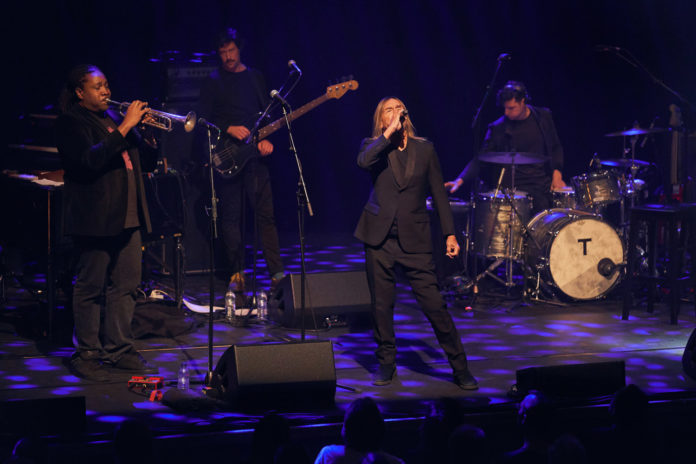 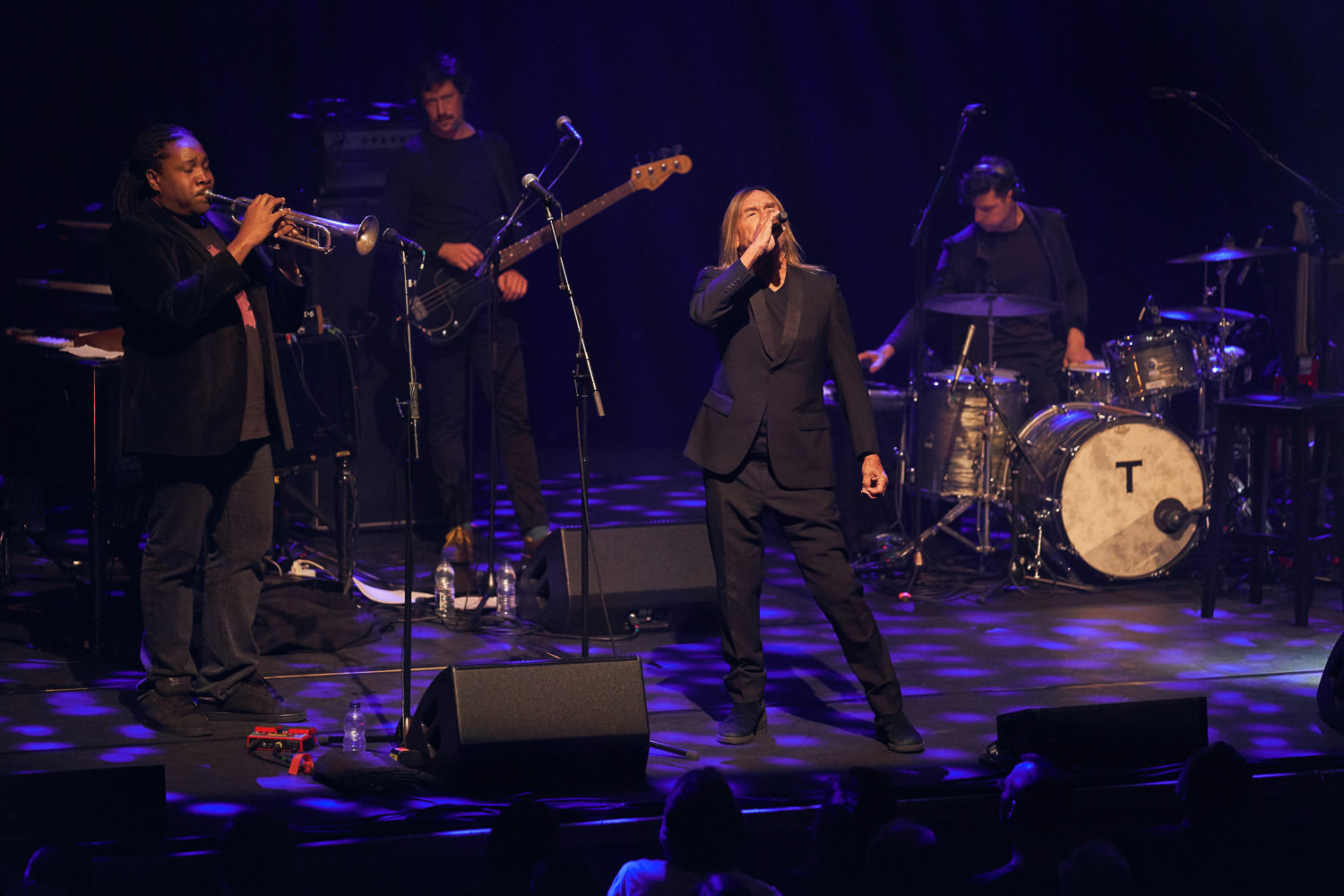 Iggy Pop performs his latest album, Free, as part of the London EFG Jazz Festival and throws a riotous party worthy of his legendary status. Paul Grace reports for Louder Than War.

The EFG London Jazz Festival is a 10-day celebration of jazz which delivers a mix of world-class artists and emerging stars. The Festival has a reputation for bringing the best and freshest music to the capital, with a wide-ranging programme of concerts, commissions, club events and talks. Tonight’s festival show is no other than Iggy Pop who is performing his latest album, Free, plus a few classics for good measure.

Tickets sold out within minutes for tonight’s show so the mood in the cavernous Barbican Hall is thick with excitement, as we get ready for the performance to start.

Dressed in a sharp black suit, Iggy Pop limps onto stage at 8pm to a huge welcoming cheer. The band are also all dressed in black, and there’s huge dark blue velvet curtain as a backdrop, which offers a distinct air of sophistication to the show.

We’re initially treated to songs from this year’s Free album, and the singer’s baritone voice lends itself perfectly to the crooner vibe. The poppiness of James Bond gets bums wiggling on seats, while Glow In The Dark builds to a jazzy peak with its pounding bass, emotive horns and shuffling beats. At a mere 5’6″ and 72 years of age, Iggy Pop truly owns the room; his smile melts our hearts, his vocal fills every corner and his moves followed by every eye in the room. There’s plenty of chatter between songs, and he explains the meaning behind some of the new tracks (“Page is about turning a new page in life; a new beginning”). 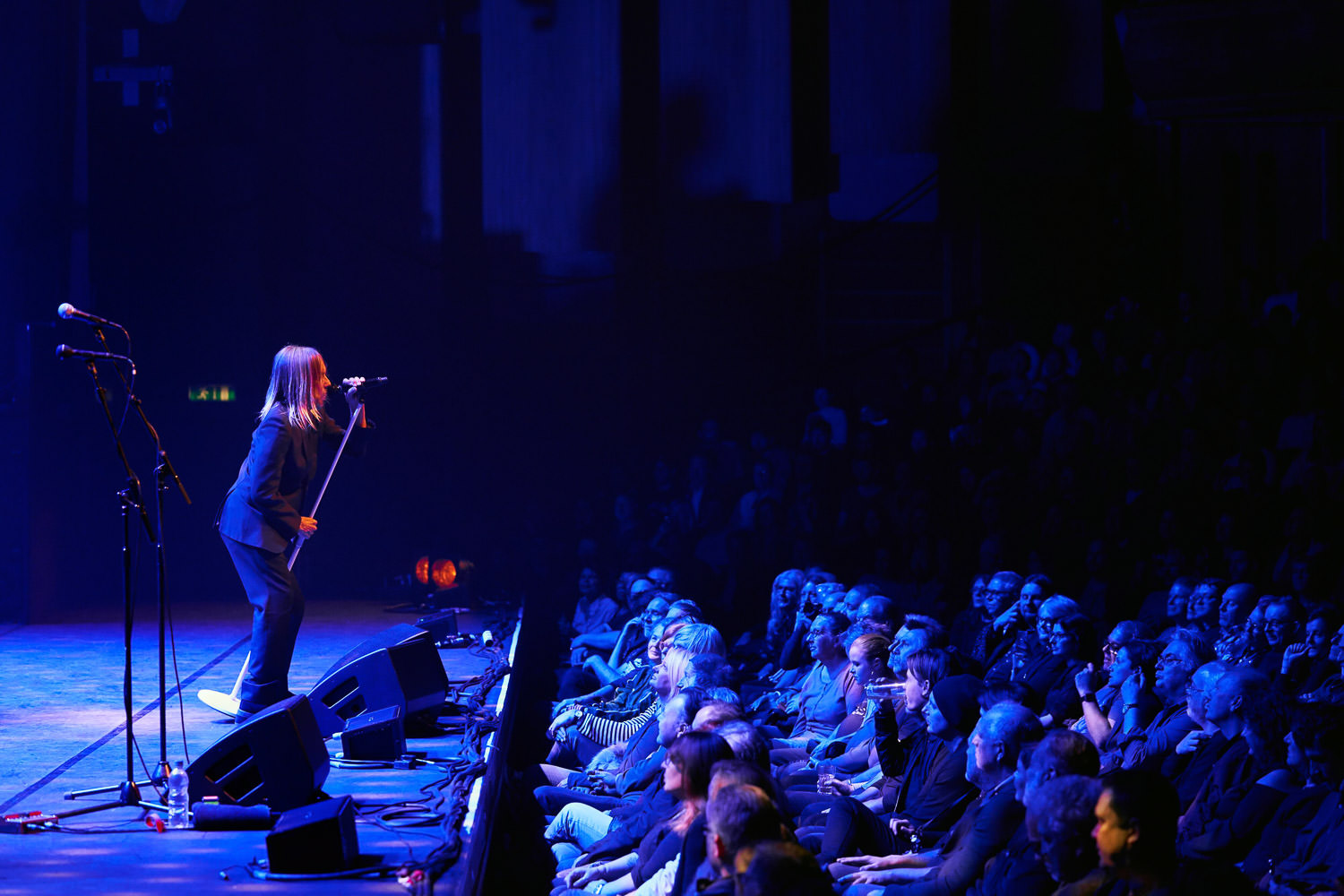 It’s not all new material though, and he takes the brakes off in the second half of the show with a good selection of classics. It’s here that things start to get really exciting, and, with jacket off, the nostalgia trip begins with a rocking version of Sister Midnight. During The Stooges’ classic Death Trip, the singer ventures into the crowd causing a mini-riot, when a gaggle of frenzied fans stampedes towards the front of the hall. As if this was ever going to be a quiet affair!

The encore features more familiar oldies including a rousing version of Nightclubbing and a fab reworking of Sleaford Mods’ Chop Chop Chop, interspersed with anecdotes from his own rock’n’roll life. Before he finally leaves, Iggy throws his mic stand across the stage before telling us, “You’ve made me so happy. You are my friends.” And it’s those few parting words that sum up tonight’s show; Iggy Pop has shown humility, gratitude and vulnerability throughout. His output might be a touch more sedate these days, but Iggy Pop still clearly knows how to throw a party.

All words by Paul Grace. For more of Paul’s writing and photos go to his archive. Paul is on Facebook, Twitter, Instagram and his websites are www.paulgrace-eventphotos.co.uk & www.pgrace.co.uk