Home Music If there is one gig you must go to this week! Public... 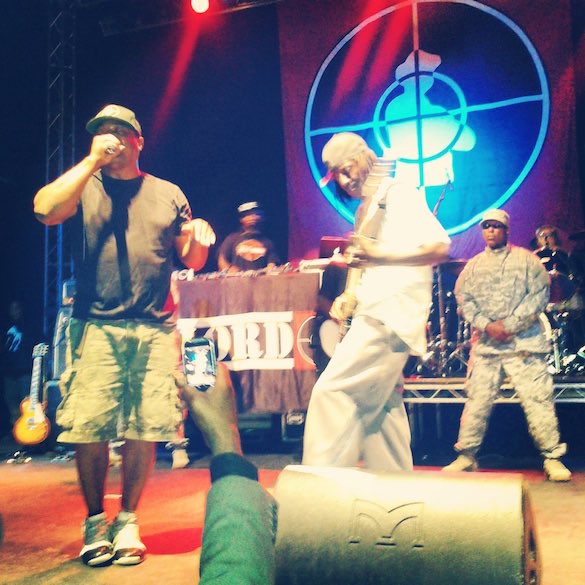 It’s the gig of the week

Public Enemy are one of the greatest bands of all time.

They arrived in the early days of rap and defined the form with their powerful presence, stunning sound and the charismatic force of frontman Chuck D.

Their live show came complete with Chuck D’s stern and powerful raps, Flavour Flav’s lunatic presence and  their own security dressed in army fatigues and was confrontational, thrilling, thoughtful and posted of a strange and powerful energy and a total funk avalanche of distorted heavy beats and hip hop power at its very best.

They were like the electric shock of punk rock but with the lithe sex beat funk of James Brown and the thundering juggernaut of hip hop beats cranked to 11 out of 10 courtesy of the Bomb Squad who are some of the best architects of sound ever. The band were not just revolutionary in a black power and powerful people message sense they were also revolutionary musically filling the room with an enveloping power.

I saw them play serval stunning gigs at the time and they totally transcended their genre. This was music beyond any narrow confines of scenes. This was music from outer space, Public Enemy were the heaviest group in the world. When they did that tour with Anthrax the metal band went on stag after them and sounded like a  wasp flying around the room after the foundation shuddering beats of of PE.

We could say that Chuck D had grown into an elder statesman but he was always playing out that role perfectly – dealing with the pressures of trying to say something in industry full of stupidity as well as dealing with his own crew and their own innate self destructive madness and somehow holding it all together.

As the decades rolled by the band have remained a potent force and even scored a hit single during the Olympics with Harder Than You Think which brilliantly samples Shirley Bassey’s 1972 track “Jezahel” as well as their own 1987 track “Public Enemy No. 1” which somehow tells you a lot about their versatility. The track came to prominence during the Olympics and was used all over the sports event sparking the band’s return to the charts.

They have just come of tour with the Prodigy who have been heavily influenced by them and are doing some of their own headline shows which will be further proof that in this field longevity can sometimes add to the potent power and and vision of the best groups.