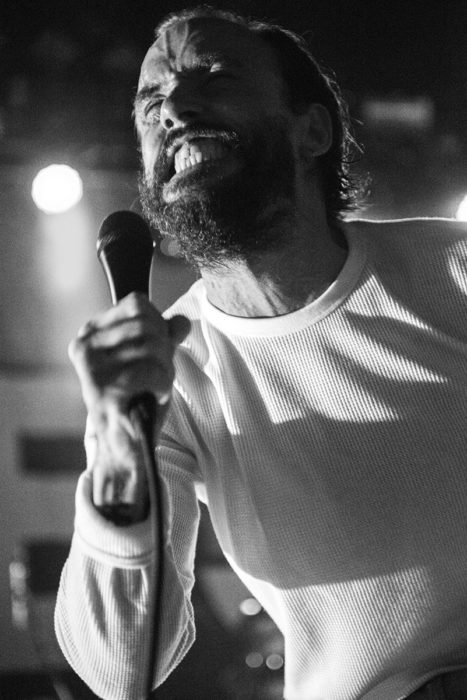 One of the most anticipated gigs in the calendar, IDLES bring their Joy As An Act Of Resistance tour to Manchester packing out the O2 Ritz. Nigel Carr reports back for Louder Than War with photos by David Gleave.

Their debut album Brutalism was Louder Than War’s number 2 album of 2017, narrowly missing out to Sleaford Mods. Could they surpass it with the new release? Read Ged Babey’s excellent  review to find out. Tonight, they bring the new album to Manchester’s sold out Ritz, sprung dance floor and all.

I’ve been immersed in this band since first hearing their debut last year. There are songs on there that you simply cannot shake off. ‘Earworm’ isn’t in it; I find myself singing the lines in my head repeatedly in the darkest reaches of insomnia, such is the potency of the lyrical content. They didn’t disappoint with the follow-up Joy As An Act Of Resistance. It’s an incredible record, surely up there for the album of the year?

How could it get any better? Tony Wilson declared Shaun Ryder as one of this country’s greatest poets; surely Talbot has joined the erstwhile Happy Mondays and Black Grape frontman? What lyricist today can create lines like “You wouldn’t last five fucking minutes with a with a body like mine and a mind like mine” combining alliteration and diacope in the same line? But this isn’t about the man, this is about the band and their ground-breaking gig in Manchester to support the new album.

The gig opens with the pneumatic bass of Colossus, drilling into the assembled crowd before Talbot saunters on stage, limbering up like a prizefighter. The supporting guitarists stagger around the stage like demented Batman adversaries fighting their way into Arkham asylum. The sound thunders around the venue to a hungry crowd waiting for the break. “I am my father’s son, his shadow weighs a ton, goes and it goes and it goes…”, before the lengthiest of pauses. “Oh For Fucking Manchester” declares Talbot, then boom! The track explodes and the whole downstairs is off, bouncing around, arms aloft – one huge mosh pit. For once I’m glad I’m standing on the balcony watching the fun unfold; It’s hot and sweaty just like it should be!

There is no let-up, straight into MOTHER and Talbot doesn’t even have to sing the chorus, hanging the mic over the front rows to the perfect unison of ‘Mother Fucker’ they know every word and are more than willing to sing along!

No one expends more energy on stage than this man. He opens Danny Nedelko shaking his head like a small boy refusing his medicine, punching the air and staggering around the stage. A highlight of the set, the song about his mate from Bristol punk band Heavy Lungs punches through with the audience going wild. At one point we lose lead guitarist Mark Bowen who proceeds to crowd surf, disappearing in a sea of sweaty faces before fighting his way back to the stage.

Talbot has a lot to say, introducing the meaning behind many of the tracks including Gram Rock “This song is about a couple of hedge fund wankers throwing cocaine at a funeral” suddenly the song is given new meaning for me as the line ‘I’m sorry your grandmas dead, grrrrr, lovely spread’ makes sense! 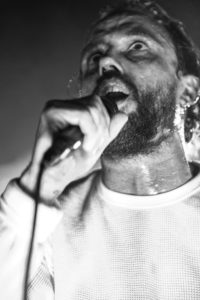 It’s those moments when the singer connects with the crowd that are special. It makes them feel part of the whole event and there is nothing but a sea of smiling faces and writhing bodies. He even dedicates a couple of songs to local heroes Cabbage which is a lovely touch as they are in the audience watching the fun unfold! At one point he declares “We are not a punk band” which raises an interesting question. For me, it’s punk oriented rock but with the term punk so hackneyed and overused I can understand his point. They are a million miles away from the Damned and The Sex Pistols. This is modern, urgent, brutal-rock with a message. Whatever we choose to call it I’ve never seen The Ritz explode like this with whole crowd dancing, and although it looks pretty violent from where I’m standing there isn’t a skirmish or any hint of bad behaviour.

Another stand out track, (frankly they all are!) Gotho 1049 about a friend with depression spews out, with the ‘mind like mine’ lyric; a highlight on Brutalism and brutally delivered.

So many of IDLES songs carry a deep message. Not all political like the racist theme of Danny Nedelko, but about growing up, dealing with tragedy, the troubles of putting on a face and faux masculinity. Samaritans is a case in point – delivered with such emotion and passion with its “This is why you never see a father cry” and “I kissed a boy and I liked it” lines. It’s those moments that make this gig extra special. The grief and emotion laid bare, pouring from the front man who punches the air, grits his teeth and spits out the lyrics like they mean everything to him. It must be truly exhausting.

And so it goes on, punch after punch with the perfect balance between band and audience participation. Towards the end of the gig Talbot invites a few lucky individuals on stage to dance along.

“Thanks everyone for coming, we’re IDLES and we’re very happy to be here”

Love Song is dedicated to making gigs safer and the band closes with Well Done (“Mary Berry’s got a degree!”) and finally Rottweiler, the audience properly sated as the band detunes their instruments on stage, Talbot long gone!

It’s an epic gig for IDLES who are (literally) punching at the top of their game. Two albums in and what next for the Bristolian quintet? I just don’t see how with the amount of energy expended tonight they are going to be physically able to finish the tour. There simply is no better live band around at the moment, with the possible exception of The Blinders, who played in Manchester the previous Monday. The pure excitement they instilled in this audience tonight was close to frenzy. Kids having a good time, just brilliant and so needed in these, well let’s just say, ‘difficult times’. “Let them eat cake she said” – indeed!

You can catch IDLES in the UK at the venues listed below before they head off to France on the 30th of October. If you can get a ticket then do, you will not be disappointed!