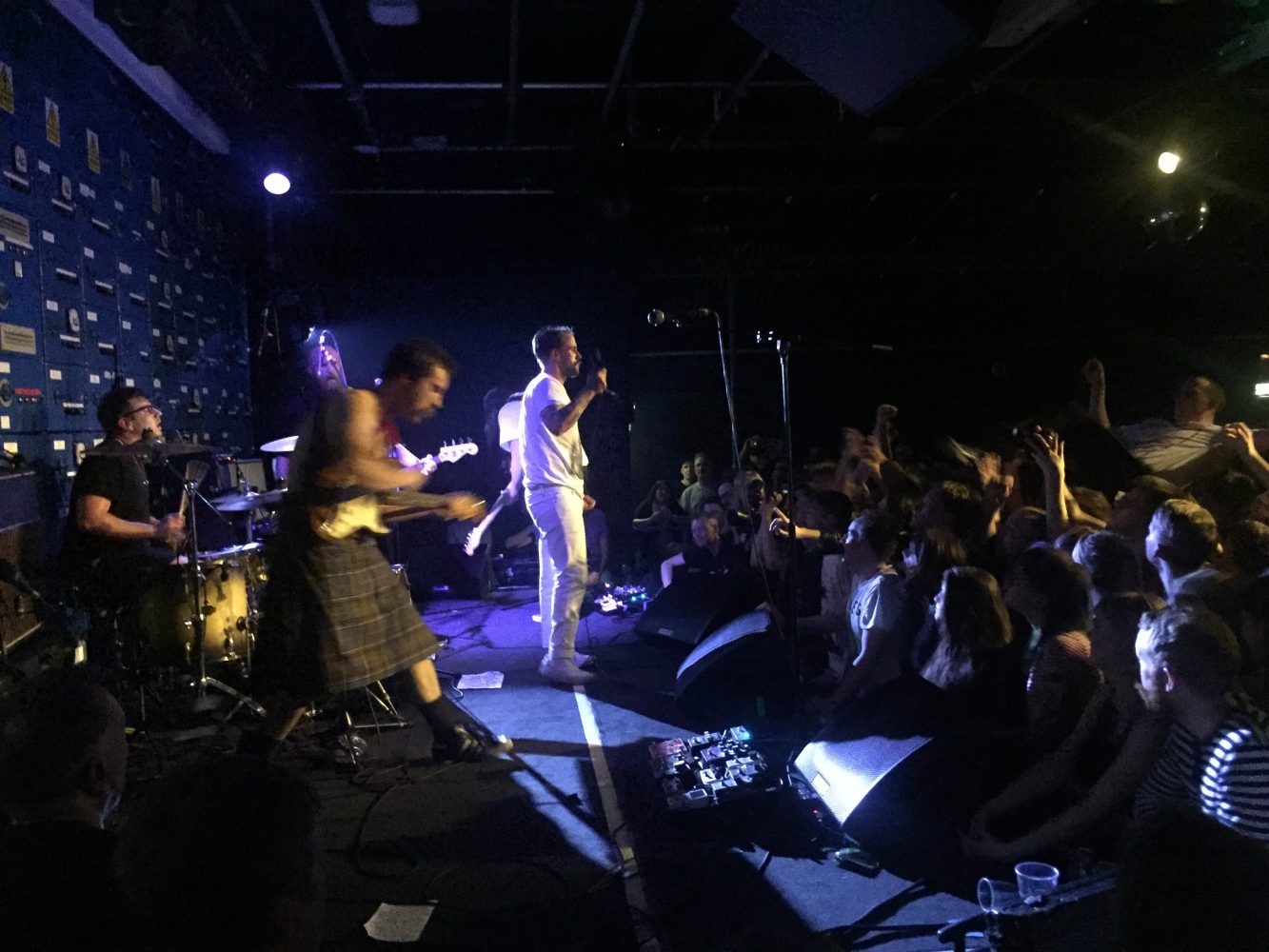 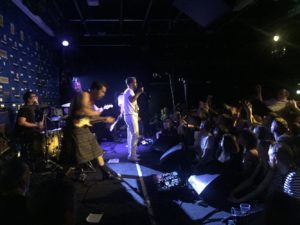 Cometh the hour, cometh the band and all that.

In these dismal and frankly quite stupid times, a band like IDLES band shine out like a beacon of creative and enthralling hope.

The Bristol band burst out 8years ago with their scuzzy, thrilling, and deeply intelligent noise and have been pissing gloriously on the eardrums with their thrillingly disheveled and invigorating noise since then. Armed with that noise, a heavy twitching groove and great insidious songs the band have been getting deliriously popular since then; locked into the eternal dark groove and singular honesty with singer Joe Talbot switching from searing heart on the sleeve lyrical skree to snarky social commentator to fairground barker – sometimes all in the same sentence whilst swinging across the stage with a charismatic, shamanic presence delivering the high decibel sermons over Jon Beavis’s precise and heavy tribal drums and Dev Devonshire’s heavy crank baselines and two interlocking guitars dealing the filth.

Heading towards their just announced second album, there is a starting honesty to the band that clashes with the Instagram filter culture of modern times. They are untainted by any kind of sheen. Any kind of flattering filter. This is a visceral, an in your face assault. This is the heart on sleeve, sweaty, smelly and thrilling reality of the human condition played out with colliding riffs and thrilling noise.

There is, of course, a mosh pit ignition about the songs that explode into glorious noise or grind along on those infernal gloves but also an awkward real-life detail, like the Sleaford Mods, but with more members – that kind of dark and dirty street poetry that sees the deliverer as the anti-hero, and as fucked up and grubby-confused as the rest of us. This is the anti-star, the anti – thesis of the showbiz spectacle of society and all the most compelling for it.

It helps that the band not only understand caustic art punk high adrenalin, and play with a dangerous intensity; but they also write deeply intelligent songs with all kind of poetic hooks and popular culture references littering their high decibel skree and also add a deep intelligence to their twin guitar assault and startling arrangements that are built in to let the adrenaline pour through your twitching frame.

‘The best way to scare a Tory’ is listed in the defining Mother – this is the sound of the UK underbelly, the other side of the equation, the new Bristol of alt culture that is stretching out like tentacles across the city and other towns now dishevelled and misplaced by recent political shits and shifts that have seen the mean-spirited and short minded take over and the elder generation become mean-spirited and selling up and selling out. The youth are revolting in all the best possible ways and IDLES are part of the new soundtrack.

Combining feral free form skronk and skree with punk rock intensity, the band take the old colliding riff chassis and turn it into something that is in danger of becoming really popular. A packed Gorilla venue, tonight with 450 people crammed in is locked into the twitching groove, a witness a band on the threshold of huge success.

Dealing deep, dark, sharp and angular riffs like a scurrying descendent of the Jesus Lizard or the more British Death To Trad Rock bands IDLES are all at once gloriously dark and dangerous but also uplifting and plaintive. Their songs are searingly honest dealing with depression and immigration and community – a nod to the hardcore scene that must have touched them but they add the wonk in that post-Fat White Family world of bands that don’t settle for the verse/chorus stuff.

The audience is hypnotized and from stage front to back wall everyone is caught up in the master killa-groove as the band shuffle and twitch across the stage like Captain Beefheart’s Magic Band in these fuzzy and raw videos that pop up now and then but on steroids. You know there is something glorious going on when everyone is locked into that nasty groove, that spectral grind, and that revolutionary decibel. IDLES are perhaps the best band in the country right now, go and see them even if you think you don’t like ‘that kind of stuff’ – you will leave the room grinning and gurning and wide awake.