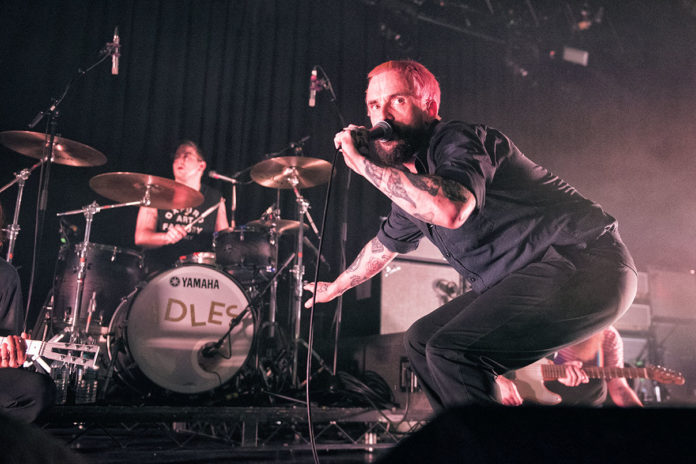 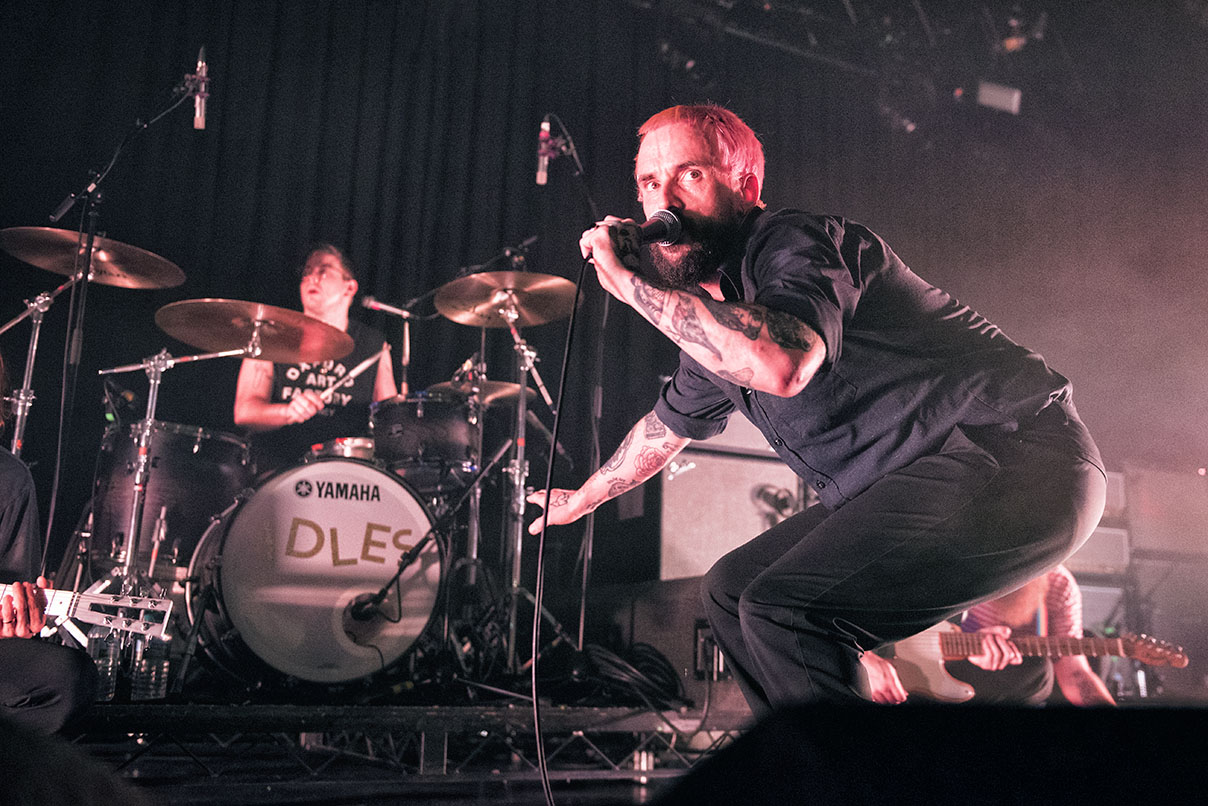 As a decade of political turmoil and despair staggers drunkenly towards a miserable conclusion, Bristol’s IDLES give us hope in the darkness and a voice amidst the clamour and chaos. David Edwards marvels in the sheer force of will and the unique audience bond that this singular band embodies…

When I was a teenager, punk wasn’t really a thing. In the fair-weather swell of the mid 90s, with the vapidity of “Cool Britannia” all around and the general sense of bonhomie telling you everything was going to be alright and that the world’s problems could all be solved with a pint of Stella and a blaring chorus. In this climate, the 1996 reunion of The Sex Pistols for the “Filthy Lucre” tour was something of an oddity and a totem of curiosity. Why were people so angry back in 1977? What could possibly cause such bile, animosity, vitriol and hatred towards the establishment. With the election of Tony Blair’s Labour government in 1997, the need for the furious anger of punk seemed further away than my young, immature brain could comprehend. Things were alright now. Things were always going to be alright.

A rapid fast-forward through the decades to a chilly December night in December 2019 puts such youthful and blissful ignorance into stark contrast. On my relatively short walk down Oxford Road towards the Academy, I see no less than seven people homeless and begging. There is a protest occurring outside Manchester University’s Student Union in support of the national lecturer strike, with mildly-mannered students confronted by towering, grim-faced security personnel. A news flash on my phone informs me that in just over a week’s time, the ever-right lurching Conservative Party are likely to win a comfortable majority condemning the country to another five years of division, misery and hopelessness. Donald Trump is the f**king leader of the free world. The planet is burning and one of the few people trying to address the issue is a sixteen year old girl with autism who has just been called an “idiot” and told to “shut up” by some infantile, car-obsessed former TV host who embodies all of the values that lead us to this state of affairs. The idea of liberal values, compassion and brotherhood in the world appears futile, cowed and sorrowful. 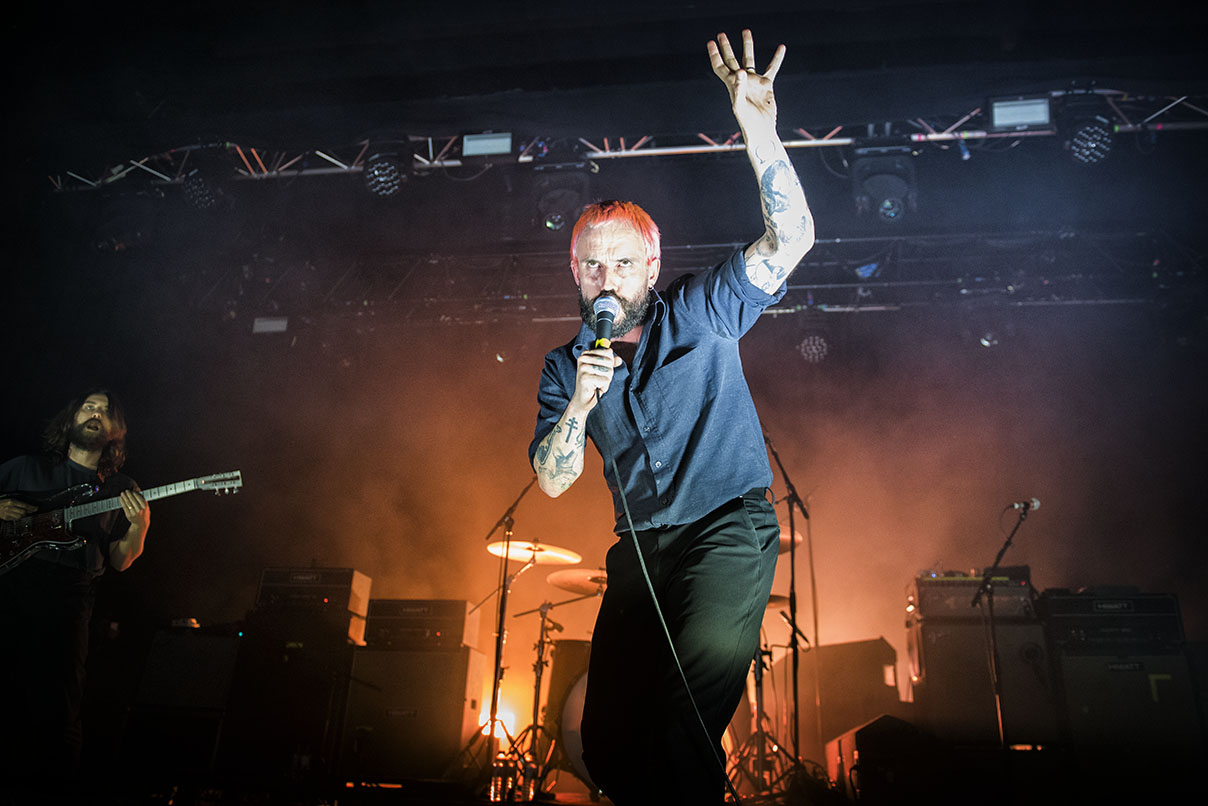 So, this is a time to be angry. This is a time for fight and for fury. And this – I have belatedly come to understand since those naïve days of the mid-90s – is why punk existed. And until there is some type of Utopia in the world, it always will. And over the past few years, Bristol’s IDLES have acted as a counterweight to the continuous rush of despair and sadness emanating from every corner of the media. Though they themselves eschew the label of “punk”, their muscularity and primary directive comes directly from the malcontent, fury and bile that has dripped from the raw wounds inflicted onto the UK in the past decade. And as we approach the final, wheezing climax of this gloomy decade, they stand as a voice of defiance and hope; screaming loudly as they enunciate our deepest frustrations.

Live, IDLES are a relentless force of churning energy and tumultuous sound. Joe Talbot’s gravel-dredging klaxon of a voice towers over the mix, whilst the scabrous clash of Lee Kiernan and Mark Bowen’s guitars meshes perfectly with Adam Devonshire and Jon Beavis’s taut and precise rhythm section. In a sense, their musical closeness adds truth to Talbot’s problems with the band being dismissed as “punk”. The ethos of punk was DIY; a flicked V-sign to the conceptions of precision in music and the over-rehearsed nature of major touring bands. Though IDLES are angry and with good reason, their sound and playing is brilliantly tight and closely bound together.

Opener ‘Colossus” is a beast of a thing – looming and menacing. The clattering clamour of ‘Never Fight a Man with a Perm’ carries a swagger and more than a note of early Rakes or Arctic Monkeys in the verses, before the chorus explodes with ballistic energy. It is clear that IDLES have the intelligence and articulacy to use multiple different sources of influence rather than simply stickling to a narrow palate. This is clearly one of the reasons for their success – they have an open mind and an open ear. A ferocious ‘I’m Scum’ is preceded by Talbot stating “We’ve been thrown so many insults. By pieces of shit who hate themselves. This song is for you and the cunts”. He then proceeds to conduct us all, getting us to go low during the breakdown. They even throw in a cheeky snippet of ‘All I Want for Christmas is You’ at the end of ‘Love Song’ later on. Despite the seriousness of their message, you get the impression that this is a band thoroughly enjoying themselves and their moment. 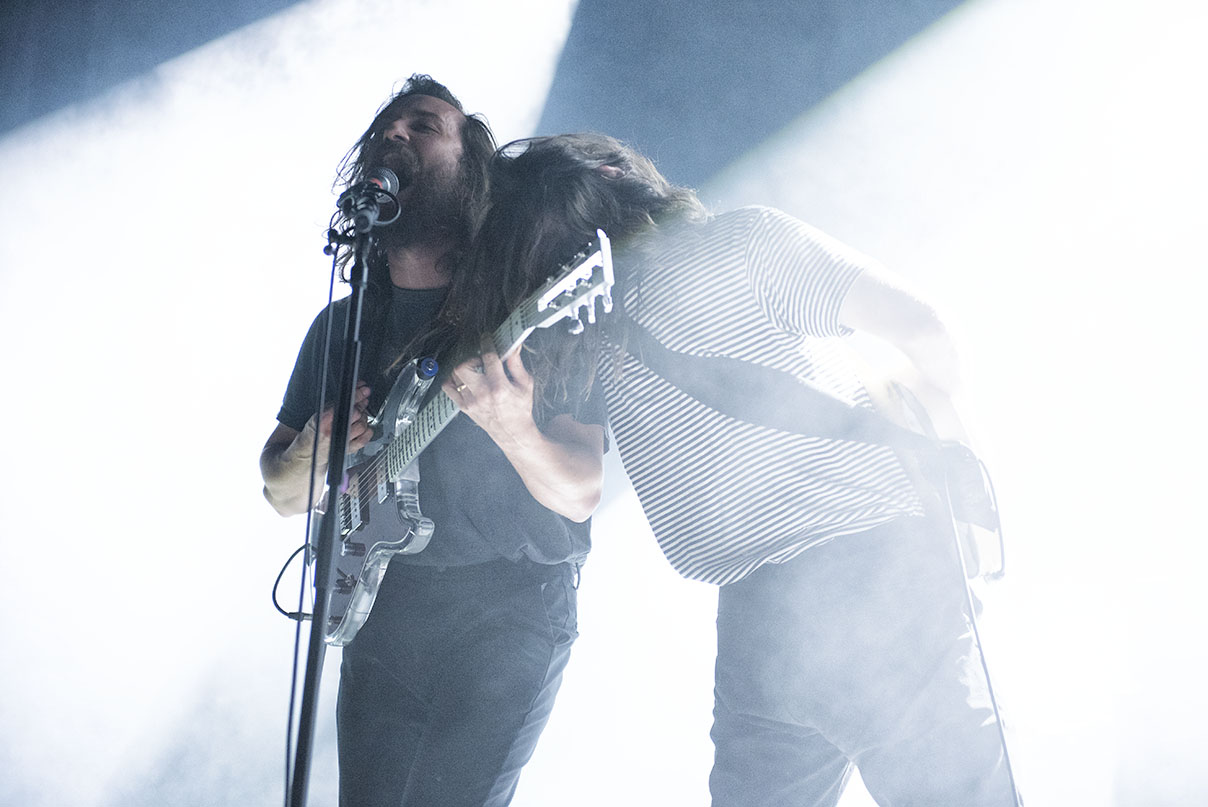 Musically however, the show is raw, with no filter. Yet precise and on point. ‘Queens’ is a whirlwind of beats and kinetic energy. ‘Divide and Conquer’ hits home brutally with its emotive dissection of how the nation’s finest creation – the NHS – is being savaged and brought to its knees by capitalism. Lines such as “A loved one perished at the hand of the barren-hearted right” is as close as a band can come to expressing the fear and sorrow that comes from watching ordinary people being torn from this world by the desire to add an extra zero into the pockets of the already wealthy. This is protest for a new time, in a new place, with a new (yet strangely familiar) enemy. And it is absolutely bloody necessary.

As the show progresses, there is a kinetic energy that spreads from person to person. The head-nodders get gradually more into head-banging. The swaying start to stomp. And the moshers at the front get more and more energised until the front rows appear to boil and bubble. You feel that, despite what is going on outside and around the world, that IDLES are giving us a safe space here. A place where we can express our frustration and our anger. To vent our spleens and to rail against the injustice we see around us. They are the circus masters; we are the captive crowd. 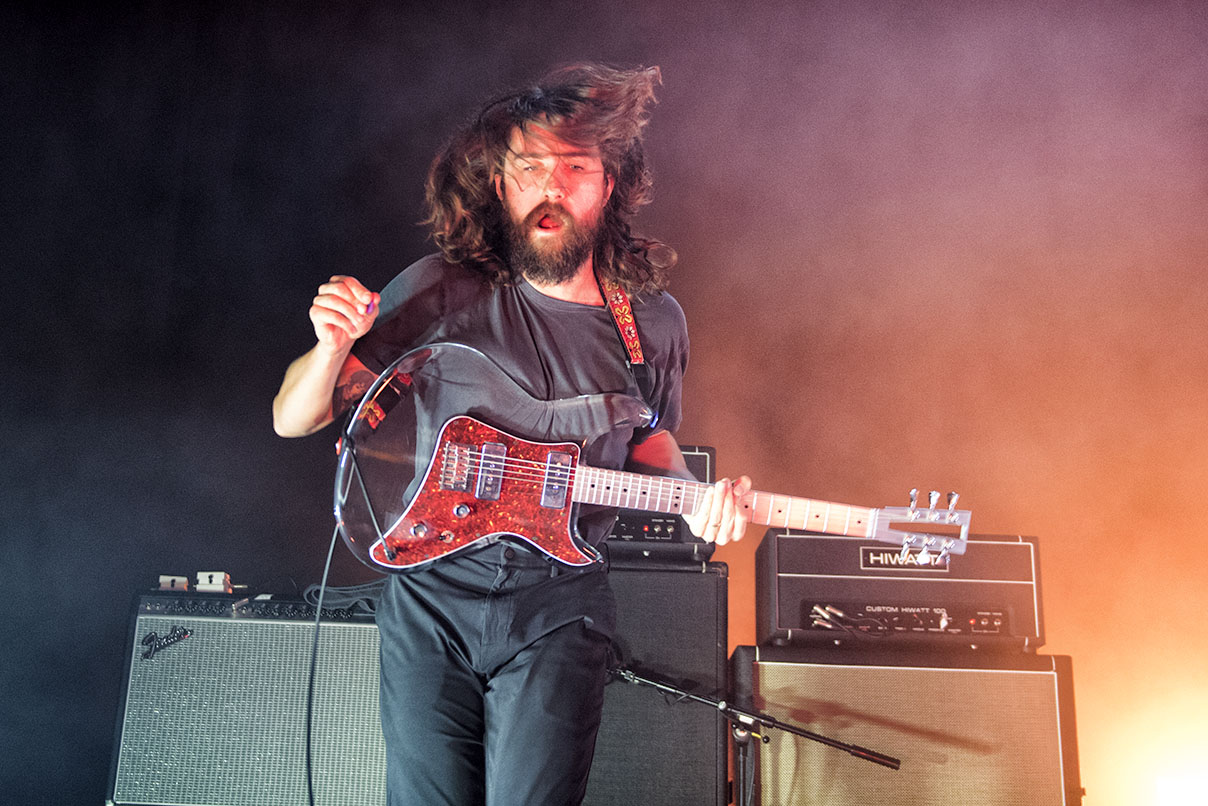 Towards the end of the set, Talbot informs us that “It’s not us you love. It’s the idea of us. And in that, you love yourselves. The community. Up the fucking North”. Almost off-hand, Talbot crystallises what it is that makes IDLES so special. This is not a band who carry any ego or any pretensions. This is a band of the people and a band who, after years of honing their craft around small venues, who in a strange irony have been propelled to the forefront of the British music scene by the convergence of producing brilliant albums and the current UK political crisis. They need us and we need them; the relationship is symbiotic. And tonight, despite all of the frustrations and the fear of what we will wake up to on the 13th December, they give us the energy to face it head-on. As Talbot intones on the closing ‘Rottweiler’ “There’s a snake in my boots / There’s a rat in my cage / There’s a shark at my feet / That’s been circling for days and days”. In the case of modern Britain, this shark has been circling for much longer than that, and it may be about to take the biggest and most painful bite. But we will fight on. We will stand tall. And we will not give in. And that is why, right now, IDLES might just be the most important guitar band in the UK. They deserve the acclaim and the accolades, but you get the impression that their mission is only just beginning. But tonight, they give us comfort and they give us a voice and a reason to be hopeful. In the current climate, with the rivulets of hatred streaming all around us, that is utterly priceless. And we thank them for it.