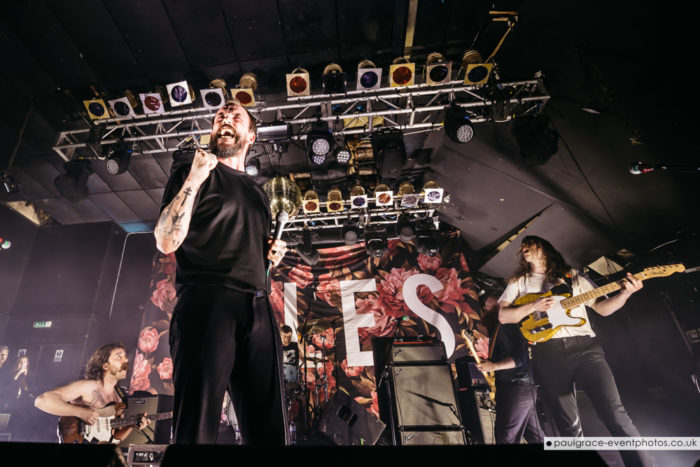 IDLES head up the M4 and unleash their infamous violet rage on the capital. Paul Grace photographs and reports for Louder Than War.

To many, IDLES are more than a band – they’re a way of life. Their fans, aka the AF Gang, are a community of like-minded spirits, over 16,000 members on Facebook alone, brought together by IDLES’ music, message and mayhem.

I’ll be the first to admit I discarded IDLES as “a load of old noise” on first listen, and it wasn’t until I paid closer attention to their last album, Joy As An Act Of Resistance, that I realised there was a far deeper conversation taking place, and that the anger was a vehicle which offered a voice to the underrepresented and persecuted in society. People like my best friends (victims of misogyny), people like my neighbours (victims of racial abuse) and people like me (victims of homophobia). Their eagerness to get the socio/political elephant into the room is inspiring, while their open vulnerability offers an authenticity rarely seen in music. There’s absolutely no room for ego in this band.

Tonight IDLES start a three night run at Camden’s iconic Electric Ballroom. All ten dates of the UK tour sold out in minutes so the streets near the venue are buzzing with excitement and, as I arrive, bassist Adam ‘Dev’ Devonshire is at the merch stall chatting to fans. 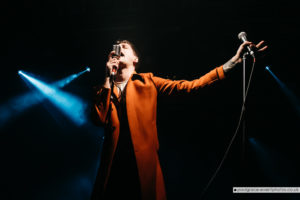 Support comes in the shape of Crows, a band who have been creating waves of their own of late. Only a week since the release of their new record, Silver Tongues, they put on a super confident performance with a distinctive post-punk sound reminiscent of the Jesus and Mary Chain, Black Flag and early Sub-Pop. Vocalist James Cox oozes brooding charisma and wastes no time jumping into the pit to get the crowd going.

At 9pm sharp, IDLES take to the stage to the menacing chimes of Colossus. A dark and moody opener, vocalist Joe Talbot’s lyrics are delivered with crazed preacher-like conviction; “I am my father’s son, his shadow weighs a tonne!”. As the song breaks Talbot yells,  “Fuck your pit…be gentle!”, and we tumble into the track’s frenzied peak. Intense. 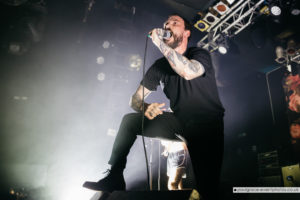 Talbot is the perfect lead, his lyrics committed with relentless brute force and, between tracks, he shares anecdotes along with persistent reminders to be “fucking nice to each-other”. This man genuinely cares. His tone comically echoes Tom Hardy’s Charles Bronson character in the film of the same name; humour is dark and plentiful but never compromises the poignancy of the visceral narrative.

He’s in for the jugular; Mother, is dedicated to all women who have experienced sexual harassment, Great, continues the conversation on Brexit, “Long live the European union!”, while Samaritans breaks down toxic masculinity, “I kissed a boy and I liked it!”. 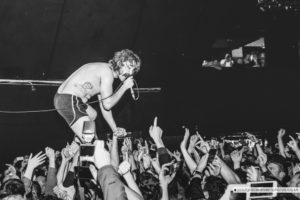 Guitarists Mark Bowen and Lee Kiernan are in typical playful mood, prancing around like Larry Grayson in panto, they share their time between the stage and crowd surfing the pit. Slamming the bass and providing the low end hum is Adam ‘Dev’ Devonshire, while Jon Beavis smashes the drums like a man possessed.

With so many peaks it’s impossible to pinpoint a favourite but, in the same week that Brexit was meant to happen, the pro-immigration Danny Nedelko couldn’t be a more fitting anthem and predictably tears a hole in the roof. While last track of the night, Rottweiler, descends into (even more) swirling chaos. Stunning.

Tonight was one of those life-affirming experiences that I’ll genuinely treasure for years. Deeply political but so much fun making it refreshingly accessible to all. This has been, hands down, my favourite gig of the year (so far!). All Is Love.

All photos © Paul Grace (big shout out to Col for letting me stand on his shoulders to take these pics!). For more of Paul’s writing and photos go to his archive. Paul is on Facebook, tweets as @pgracephoto and his website is www.paulgrace-eventphotos.co.uk