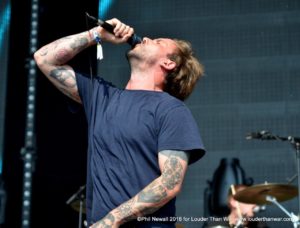 A year ago, IDLES were playing at The Ferret, Preston; it was £3.50 entry; and was quite well attended but certainly not sold out; perhaps 120 in the audience – fast forward 12mths to a glorious sun-drenched Bearded Theory Main Stage arena, there are approximately 8000 awe struck people, each utterly transfixed by the chaotic explosion of sound and vision that is IDLES

Frontman Joe Talbot is a mass of seething aggression as he pinballs the vast stage, barking out barbed lyrics, by the time the opening track ebbs into a howl of feedback a mosh pit has exploded, security guards suddenly awakened, nervously looking over the barrier; they had no need to fret; IDLES music is about inclusion, about acceptance and challenging intolerance;

IDLES deliver a caustic, relentless set that draws heavily from their 2016 ‘Brutalism’ album, but also offers up new material in the form of ‘Love Song’ which retains the IDLES motorik groove and slashed guitar, a clear indicator of where IDLES are heading towards; to witness such anger, such naked rage is life genuinely affirming. 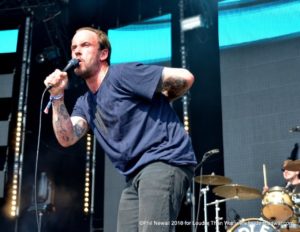 Drummer Jon Beavis provides the punishing beats, Talbot pirouetting the floor before pausing to welcome “my friend Isaac” onto the stage to sing the opening verse of ‘Mother’ – Issacs looks to be perhaps 5yrs of age but with microphone in hand delivers a stuttering opening verse only to be aided by Talbot as “fucker” ricochets across the Derbyshire countryside.

Guitarist Mark Bowen abandons the stage for the mosh pit, clambering over the barrier to then be carried on the crowds shoulders all the while maintaining that trademark savage rage, bass guitarist Dev, a by now sweat sodden mass maintains that 90 degree stance to Beavis while underpinning each track with a delicious dark and ominous groove; Bowen by now has sunk into the seething mass – suddenly another figure is lifted from the melee guitar in hand, one of the crowd has taken his place; he is carried arms aloft all the while ripping mangled chords, Bowen eventually recovers his guitar and clambers back onto the stage, he plays his guitar at chest height almost peeping over the parapet as he seeks out snarling riffs. 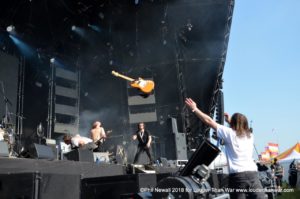 IDLES are intense, their feral sound is waking audiences across the globe, people are tired of over produced packages, IDLES offer a real alternative, socially attuned, sound tracking the zeitgeist – lyrically their songs deal with class division, depression, immigration but most of all a sense of belonging, Talbot dedicates ‘Divide & Conquer’ to the NHS’ they are tearing down the barriers – as if to reinforce this second guitarist Lee returns to the crowd, he’s over the barrier; there is no division between band and audience, an element that harks back to their raw punk inspirations; suddenly Lee breaks free…he’s in the safety pit, his guitar being swung downwards like a felling axe before momentarily glancing stage wards; for a moment time freezes, those at the front know what he’s thinking; he launches his guitar skywards, thousands of eyes following the trajectory before it crashes to the floor bringing the set to a close.

IDLES delivered the defining set of the entire festival, they are loud, confrontational, and the most vital band in the country right now.