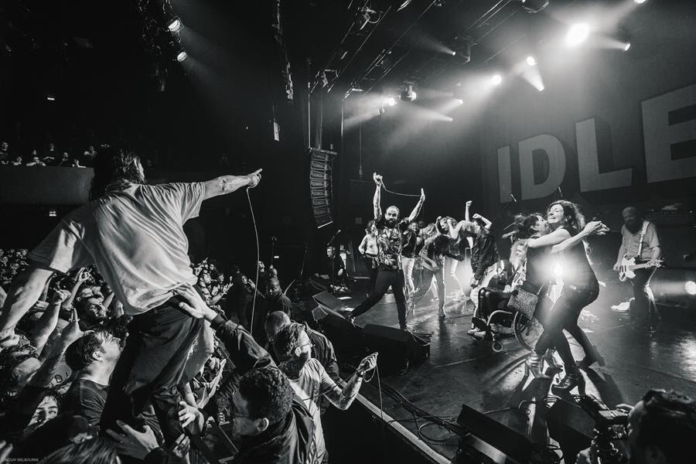 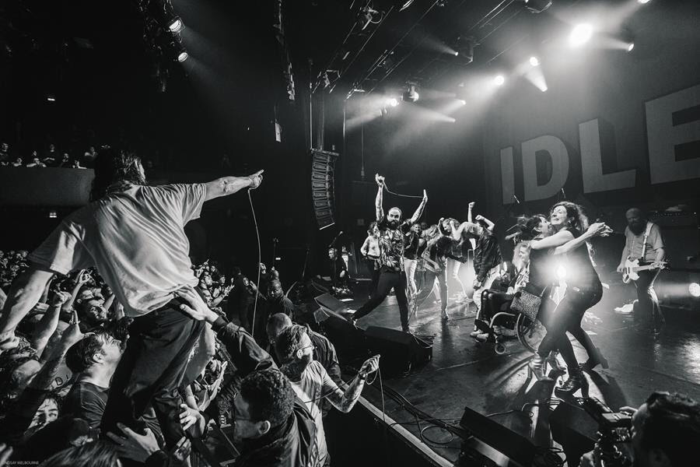 Today, IDLES have announced their first live album ‘A Beautiful Thing: IDLES Live at Le Bataclan’, and have shared the live version of ‘Mother’ taken from the record.

The limited double LP edition will be available across three different colours (clear orange, clear pink, clear lime), each with their own individual artwork. All will be housed in deluxe gatefold packaging, and each will contain a booklet designed by Joe, featuring photographs from the show and a selection of poetry.

“A Beautiful Thing: IDLES Live at Le Bataclan” will also be available to buy on CD and as a download.

The album follows a recent Mercury Prize nomination (and incendiary televised performance) for their critically acclaimed second album “Joy as an Act of Resistance”, and celebrates a landmark couple of years for the band with a top 5 official UK album chart position, an Ivor Novello award for ‘Best Album’, a breathtaking Glastonbury performance, a completely individual appearance on Later With… Jools Holland and a number of sold out tours across the world. IDLES were also recently chosen for Apple’s ongoing Shot On iPhone campaign, with billboards up now across the globe.

Speaking about the album, vocalist Joe Talbot says, “Our show at Bataclan was the end of a very long journey for us. On that tour we learnt so much about ourselves, each other and the audiences we have grown with over the past 10 years. That show was nothing short of catharsis and nothing more than love. We love what we do and the people who have carried us here, there was no hiding that at Bataclan and we are so very grateful that the moment was captured in all its glory, love and fatigue. Long live the open minded and long live the moment.”

IDLES also recently announced a short tour for December to celebrate the bands recent string of achievements – including their biggest headlining date yet on Saturday, 7th December at London’s Alexandra Palace. All five dates went on to sell out within the first 24 hours.