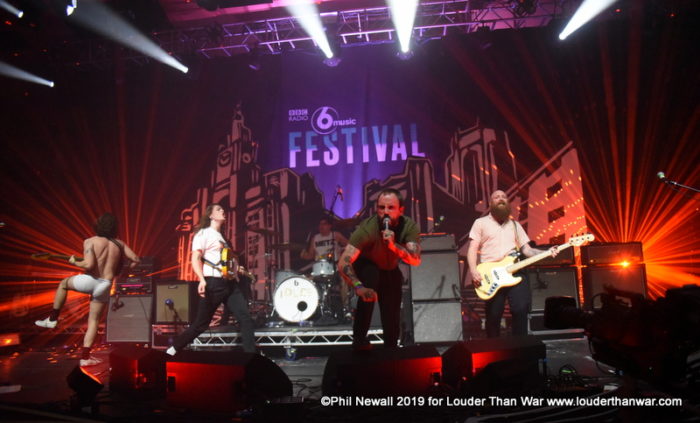 IDLES return to Liverpool after almost two years to the day. Their previous appearance was in a rammed Craft Tap venue as part of the Smithdown Road Festival – that gig was free, this one has attracted a hefty price tag of £40 and also the added inconvenience of dragging yourself out of the city centre to the crumbling beauty of the Olympia. That said, the local cab drivers were certainly celebrating the ludicrous distances between selected 6 Music venues – and then there was the elephant in the room: the time. It’s 5.30, not a time renowned for rock ‘n’ roll legends: this has also created much talk of cynical scheduling, put the draw on first in a venue that once you are in you are tied to, assuring a crowd for the following bands and boosts bar take.

None of this bothers IDLES – the place is packed, a huge braying AF Gang welcomes frontman Joe Talbot. For non-disclosed reasons, Mark Bowen is wearing just a pair of white Calvin Klein boxers, Dev assumes his traditional 90° stance to drummer Jon Beavis, sticks raised, a flashed glance to Talbot then all hell breaks loose, as the visceral beauty of Heel/Heal threatens the to peel the plaster façade from the walls. The crowd are all here for IDLES, and respond accordingly, bodies are bouncing, the guitars are beautifully scuzzy, Talbot’s on-point lyrics both comment and challenge, he has a charisma that despite the efforts of Lee Keiman (who is now over the barrier and into the crowd) transfixes the expectant audience. 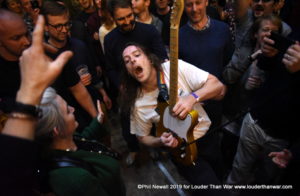 Talbot stutters momentarily when he breaks the 6 Music no swearing broadcast rule during the opening of Love Song which he dedicates to his wife; this is brutal, IDLES are playing with heated intensity, the drum and bass backbone providing the perfect platform for the twin guitar assault. Talbot stalks the stage immersed in his music, before describing the country as “beautiful” due to the influx of “beautiful immigrants” ahead of Danny Nedelko, whilst a wall of sonic scree cascades around him. Bowen abandons his guitar taking to the barrier to holler the spelt-out title, returning to the stage in time for the 60 second Ice Cream that sees Talbot grind a single note riff from a guitar whilst Bowen takes up vocal duties. 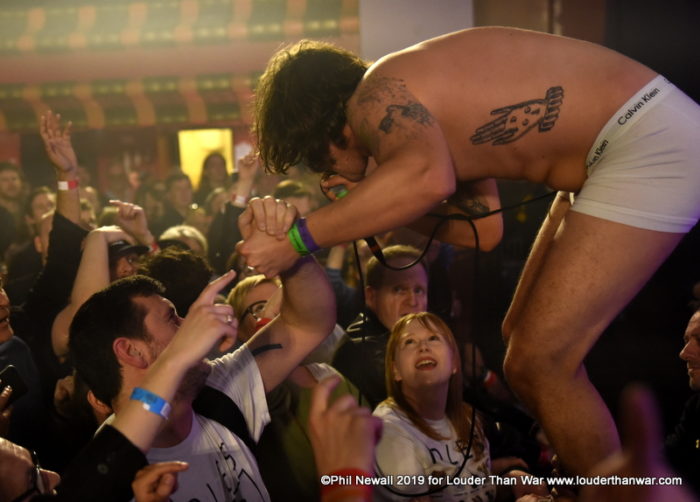 Mother is blistering with the defining “The best way to scare a Tory, is to read and get rich”, the band deftly avoiding the “fucker” chant by simply letting the audience fill the gaps. Talbot doesn’t hide his song’s message, he praises the NHS ahead of Divide And Conquer and the “I kissed a boy and I liked it” breakdown of Samaritans is sublime. From the front to back the entire place is super charged, the audience is energised, each and everyone joins in the dark malevolent groove. 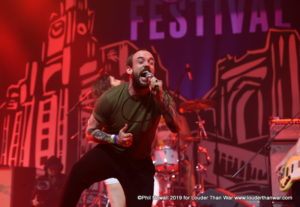 They conclude with Rottweiler which Talbot (regretfully) dedicates to Liverpool band Her’s, reminding us “Don’t buy The Sun, it’ll give you cancer”. As the track concludes Talbot leaves the stage, leaving Bowen and Keiman to create a grinding head-fuck screeching wall of distorted mayhem, that only relents when Lee hurls his already battered guitar across the stage. As he turns to leave he shouts out the Hers track Harvey, and in a single word demonstrates IDLES commitment.

All words by Phil Newall. More writing by Phil can be found at his Louder Than War Author’s Archive