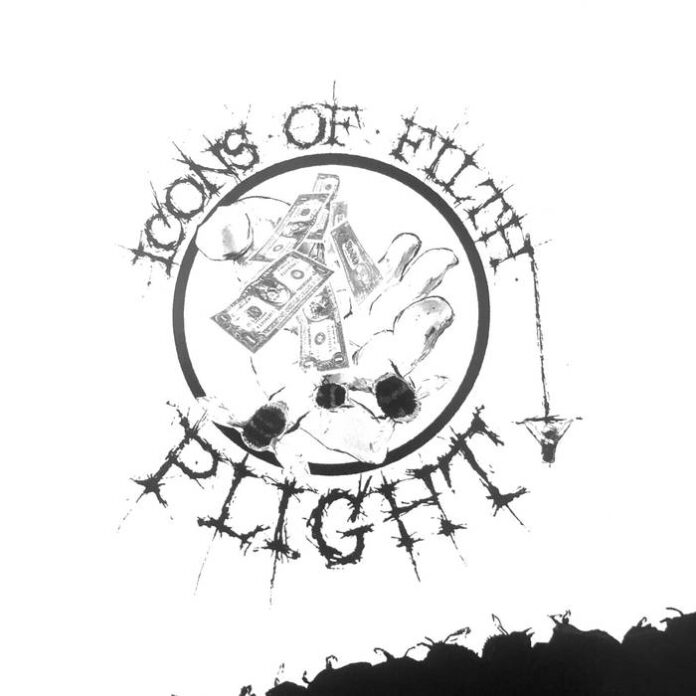 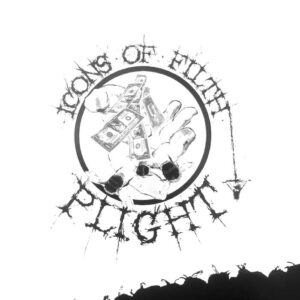 Icons of Filth – Plight (Grow Your Own)

A resurrected blast from the anarcho-punk past comes back with a more contemporary “crust punk” sound but some of the same messages about the state of our planet.

I grew up listening to Icons Of Filth as a teenager and was heavily influenced by the messages in their lyrics and artwork as well as the aural delights. I am not alone in that. In the post-Crass anarcho-punk community IOF occupied a position of respect and adulation rivalled only by their mates Conflict. The premature death of frontman Stig in 2004 was felt heavily. 10 years on from his death the remaining members got together at the Full Moon in Cardiff to mark the occasion with various family and friends taking up the mantle to sing his words. It was an emotional experience, and thought to be a one off.

The band have since continued to play with a few singers and have been through several line up changes before landing on the current personnel. The decison of the band to continue playing gigs without Stig was controversial. I know some former members of the band weren’t happy with it. The decision to release records under the moniker Icons Of Filth appears to be even more controversial. It’s amply illustrated by a couple of mates discussing this new release recently on social media:

“How can you have Icons without Stig? it’s like Motorhead without Lemmy.”

“I like what I hear but I agree – why not just form a new band instead of flogging an old name?”

Whether or not bands should continue if they don’t have sufficient “original members” is a common topic as the punk community ages disgracefully, with get-outs allowed for some and condemnation for others. However, it has to be said that for a band whose vocal attack was such a massive part of the identity, it is a valid question (see also Dead Kennedys). More so, Stig was held in such high regard that there is an added emotional wound.

The band acknowledge the issue in a statement on their website:

“Following the death of Stig in 2004 the Icons of Filth disbanded. In 2014 after an anniversary concert to mark Stig’s death the band decided to reform. Undoubtedly different and forever changed but new and evolved.

We want to continue to play the old songs that everyone in the band helped create. We believe that they still deserve to be played and heard in a live environment.

Coming together with a new line up has allowed a fresh wave of creativity and so we are really pleased to have got to the position where we can release a new record and we hope people like it. We know not everyone will agree with our decision to create new music. We know who we want to offend and it isn’t those people. We still have tunes to write and things to say. Peace out.”

I’m not going to judge this decision. I have to set that issue to one side and review the record that Grow Your Own have taken the trouble to release. 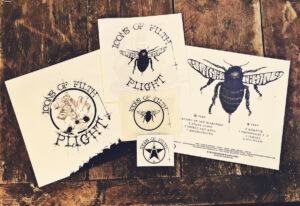 Visually this record has the hallmarks of Icons Of Filth. Black and white imagery, their familiar logo. The bumble bee Plight motif on the rear is good enough to have been the cover in its own right, and limited copies come with this symbol on a patch. The lyric booklet lays spidery hand worked calligraphy over suitable imagery for each song. As ever, Grow Your Own have ensured it is a great package, more than a record in a sleeve.

On first listen, I declared this was like a completely different band which demonstrates how much Stig’s vocals were a defining part of the Icons Of Filth identity. If you set aside that vocal difference there is a little of the old Icons Of Filth sound to be heard lurking beneath the surface, but brough up to date. While it has more of a metal feel, Daffy’s guitar playing  follows familiar patterns. The bass has a trashy distorted sound. The upbeat tempo driven by the drums is in keeping with the band’s former identity.

Some of the song structures (e.g. Heretic, Evil Starts) are very much in the vein of early Icons of Filth but the overall sound is much closer to the second album, Nostredamnedus released in 2002. The vocals are at times shouty, almost hoarse, while at others guttural or growly. Put together with the music, the record sounds like many contemporary “crust-punk” bands. Music to rub margarine onto your multi-patched trousers to. If you’re expecting a continuation of Onward Christian Soldiers you will be disappointed.

The central theme of the record is humanity’s imminent suicide by destruction of nature driven by a slavish destructive economic system. The two are connected. Animals, people, planet, we share a plight unless something changes. As singer Lance intones on Plight of The Bumblebee “They Die We Die”, the guitar chugging away like the beating wings of our pollinating friends. Money Flows describes the war mongering impact of capitalism and I think I recognise it from the band’s live set in recent years. People Are Real continues in a similar vein decrying the way money can be valued over human life, with a catchy chorus riff. Disconnected explores the impact of the rat race on its semi-willing adherents.

Listen to People Are Real by Icons Of Filth

Heretic celebrates those who challenge mainstream views. We are taught when people question the accepted view to “Shout ‘Heretic’ to shut them up”. Unfortunately we now live in a world of conspiracy lunatics led by far right social media postings so the song’s presumed original message risks being tarnished by association. Follow up song Propaganda 2.0 actually speaks to this issue: “Fake news hides the true story, manufacture distraction fury”. Ending as it does with the screamed “We are burning” we are brought back to the environment.

Tarmac Land focuses in on environmental destruction and pollution at the behest of the road and car lobbies, still a concern and still making lots of money for vested interests. The final song Evil Starts does have an evil sound to it with subdued intoned vocals sounding like a Lovecraftian or Crowley-esque spell being uttered. Taking a wide sweep of media and surveillance in their aim they target the evil of inaction. When Evil Starts, they ask Where is our Reaction?

This is a heavy sounding record of politically pointed songs shouted and screamed over chugging and whining guitars, hell for leather drums and a gnarly bass. It is good enough to stand on its own two feet without needing the cachet of the band name. I fully understand and respect why some people are unhappy about the continued use of the name. I can understand why some members of the band want to keep the legacy going but it sounds substantially different. Given the emotions involved it might have been a smart move to start afresh, but what’s done is done. It’s a shame that some may be put off this release, as they would probably love it if they gave it a chance.

Buy the vinyl or download from Grow Your Own.