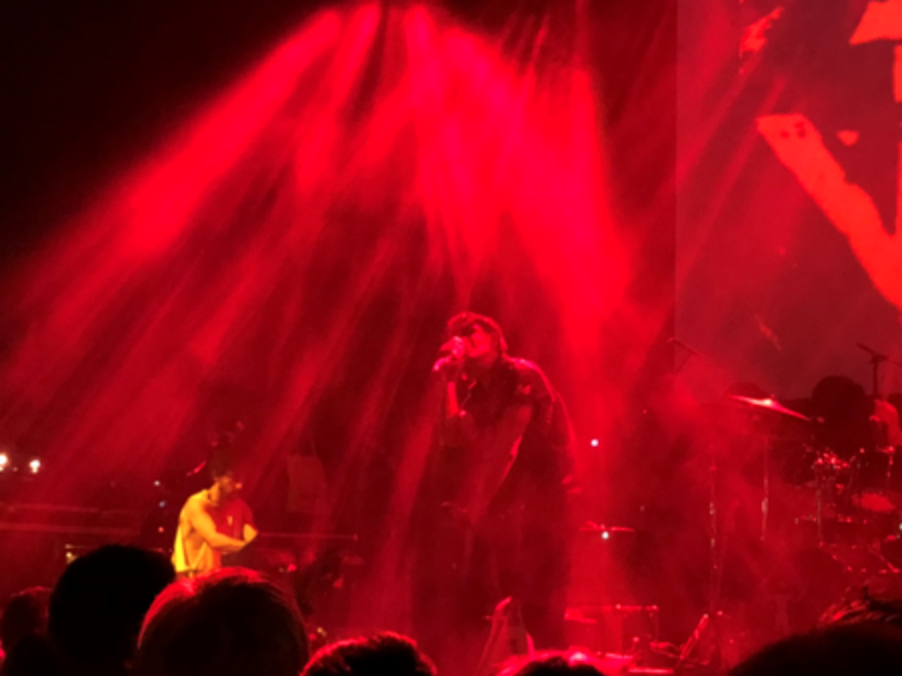 In one of the coldest capitals of Europe, there’s an annual music festival which boasts some of the hottest venues around hosting a good mix of Icelandic eclecticism and a smattering of what are called ‘International’ acts – it’s Iceland Airwaves. This year is the 20th Anniversary. It’s pretty similar to SXSW by all accounts: Wristband entry into multi-venues.

Last time I went, ten years ago, I ended up making friends with the Young Knives, drinking with Florence, watching a youthful Biffy Clyro in a tiny venue strutting their stuff and also discussing British Motorway Service Stations with Jonsi of Sigur Ros. He knows his stuff.

Ten years on and there’s fewer “big name” acts, unless you include Superorganism, The Voidz and Not3es and what seem to be a lot more Icelandic artists on the bill. Just like all festivals, it’s impossible to see everyone, it’s hard enough to get to see all the ones you plan to, especially as the fun of it is making new friends and hearing about their plans.

As well as official scheduling, there’s “off-venue” events, kind of “pop-up” shows, less organised and often much more entertaining. And that’s where I started my six days; on Tuesday evening in Dillon, a self-styled whisky bar watching the excellent Shawn William Clarke who in his own words is an indie-folk singer songwriter from Canada. Next up was Petur Ben, a local musician who kept a low profile during the week but pulled out of the bag a wonderful stripped-down version of the Stooges’ ‘Search and Destroy’.

After a day out in my hire car exploring the ridiculously beautiful Icelandic landscape, the evening started at the Kex Hostel with geeky-pop locals Bagdad Brothers; a really talented quirky crew led by Bjarni Daniel – imagine the new 007 “Q” (Ben Whishaw) singing in his pyjamas. A nip across town to the impressive Gamla Bio venue, with the not-so-impressive stubby cans of Heineken at around £7 a tin, to see Arstidir create harmonic and melodic, well-structured, crafted songs which became hauntingly alive with the addition of strings. Over to Hresso – a small bar to see minimalist ghost-like electronica from asdfhg. I’ll be honest, it was so relaxing that I fell asleep and woke with my head on an elderly Japanese lady’s lap, who was also asleep. Dragged myself over to Hard Rock Café to see rock band KUL who I’d bumped into at the wristband exchange…(“who are you most like” I’d asked, “Strokes….QOTSA….Modest Mouse” they answered)….which was a good thing as they summarised their sound better than I could do. Lovely lads too.

Thursday was an epic evening: Bagdad Brothers again, this time at Hurra, a great bar for viewing bands in, followed by new British soul, gospel blues-looped songstress Tawaih, she was very enchanting and given the right promo she could be a massive star. Bearing in mind she went to the BRITS School (Amy, Adele etc) she ought to be. A complete contrast as a group of uninterested gawky teens took the stage, one in a Reg Vardy Sunderland top, who played like they were in a room on their own, no acknowledgement to the crowd, no banter, just play it all and walk off with nothing said – I wondered if they were sons and daughter of the late Mark E Smith – because they were wonderful – if you haven’t seen Jockstrap yet, put them on your MUST SEE list.

A quick walk over to Idno where I’d last seen White Lies perform to fifteen people in 2008. Thankfully on this occasion, Husky Loops were giving a magnificently powerful sound and light show bursting with break beats and sizzling guitar buzz, wonderful to witness. Sadly it was all too much to follow for Snail Mail singer Lindsey Jordan who stropped with her sound, which to the untrained but experienced ear, sounded ok and she sloped off at the end after a sneering solo. The rest of the band seemed bored and uninterested, maybe that was her reasons. I dunno: Not seen anyone as pissed off as that since 50 Cent at Reading Festival. The night was rescued by Tamino, whose manager described him to me as “like a cross between Radiohead and Jeff Buckley”. Pretty spot on, he was great. Crafted ballads and a wonderful voice. He played to 4,500 the next night in Istanbul. He could be massive.

Friday evening four acts for me at Gamla Bio; local bands Mammut and Agent Fresco both of whom were over-proggy and too cliché rock-by-numbers for this reviewer, they went down well with the Icelanders mind, particularly those with beards. Julian Casablancas took the stage with his mish-mash The Voidz.

He seemed a little, erm, confused as to quite where he was and mumbled a stupid monologue about goblins and elves or something. That aside, there was no doubting the ferocity and complexity of the riffs within The Voidz, it just seemed as though they were all playing different tunes though. That was until the last two songs which by the laws of average seemed to co-ordinate, to create pulsating and dynamic stomping bangerz that Marilyn Manson would be proud of. Julian looked like he was enjoying himself but over-the-top lead guitar Jeramy Gritter stole the show. More showmanship followed in the shape of Hitari who put on a semi-erotic art show lacing with meaning that I didn’t understand at all – time-machine back to The Tubes some 41 years earlier. Costumes over substance: “Best live band” in Reykjavik twice over allegedly. Locals said they looked tired.

Fanfares: Something tremendous: The find of the whole Festival – Surma a Portuguese one-tiny-but-utterly-amazing-woman-show, you cannot meet a happier performer.

Self-programmed beautiful bleeps and ethereal vocals she literally feels the music, immersing herself inside it and you’re drawn in. If you do nothing else with these links, please check her out. She was fascinating to watch and wonderful to meet after the show, so engaging and effusive. Had to see her again “off-venue” at Dillon the next day too.

Saturday – I’ll be honest, I picked some duds, some real turkeys: locals Different Turns were tuneless, turgid, mushroom-stoner avant-garde rock…I had to be honest with the bass player of KUL, Halfdan Arnasson who I bumped into at Team Dreams at the Harpa venue, (think Millennium Centre, Cardiff) and confirmed to him what his girlfriend had been trying to tell him, that they are crap. I didn’t like Team Dreams either – it felt like three great musicians had rushed into collaborating for the purpose of this gig the night before. I could be wrong, I walked out of the Yeah Yeah Yeahs when I first saw them, I have got form in this area. Joipe x Kroli (one of whom is the Icelandic President’s nephew) were contrived, like a Pop Idol Iceland winner, I tried to find something to bop to within their set, but it was stodgy. Maybe I was just fed up…but not as fed up as Not3s….because….

….the saddest event I witnessed at the festival was TWENTY THREE people that made up the whole audience for the British rapper in the thousand plus capacity Reykjavik Art Museum that hung around after Rejjie Snow’s show. His DJ was pleading for people to come back into the room, but they’d gone; “Not3s won’t be happy guys” he said to the plucky twenty three of us – as if it were OUR fault. To give Not3s his credit, he put on a show, walked off disconsolately and I later saw him slumped in his tiny after-show dressing room flicking through his Instagram with his head in his hands: Big shame – not one of Airwaves’ success stories. Not even an Addison Lee to take him home.

But to finish on a magnificent high….on Sunday afternoon, back in Dillon, two Norweigan brothers known as Sturle Dagsland screamed, bashed, yodelled, wailed, yelled and hung upside down from the ceiling – well one of them did, the other sat impassively playing a bleepbox. It was like The Membranes meets a Kenwood Food Processor – awesomely life-affirming. Like all great musicians that leave everything they have on the stage, nothing is kept hidden, music in its most raw form; they were the nicest guys. The perfect end to an amazing festival in a great city.