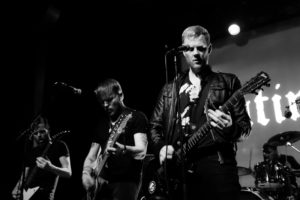 [Check out part one here]

It’s evening time on Thursday before I go on the prowl for gigs at Iceland Airwaves having spent much of the afternoon in those wonderful thermal pools that are dotted around Reykjavik. After a bite to eat and a bit of wandering about I find myself in the cavernous Bar 11 to see Tjorvi Oskarsson aka Subminimal. I’ve been listening to his records for quite some time but never had the opportunity to catch him live until now. Beats and bleeps as dark as the bar come raining down on the crowd gathered to deliver the finest drum and bass I’ve ever heard in my life. He even threw in a Samaris remix. Outrageously good.

Over to recently reopened NASA venue then for one of my favourite Icelandic bands and the best metal band in the country right now in my book. I’m talking about the mighty Kontinuum. Last year I caught them multiple times when they only had the one album out, their magnificent debut Earth Blood Magic. This time around at Airwaves they also have their sophomore effort, the brilliant Kyrr in their arsenal. Here they give us half an hour of songs from both with their trademark powerhouse metal sound combing with more melodic ambient passages to great effect. The only complaint I’d have is that the set is too short but hey it ain’t a bad sign when you have the crowd roaring for more at the end of a gig like hungry wolves baying for blood.

It’s only short skip over to the old cinema by the pond where Sea Change are playing. Essentially a solo project of Norwegian musician Ellen A.W. Sunde here she has a percussionist and an electronic maestro in tow while she concentrates on vocal duties. It’s a nice set which brings to mind Lykke Li in places. Back to NASA then to end the night and the first band I see on my return are Canadian/ American outfit Operators. This is Dan Boeckner of Wolf Parade’s new band and they light up the dance floor with the excellent song True which oozes synthy goodness and catchy rhythms.

The next band could never be accused of being catchy however. The origins of HAM go way back to 1988 and since then they have become somewhat of an Icelandic institution. Having disbanded in 1994, a German band who sound a lot like them, Rammstein,  became very popular worldwide and when they decided to play two gigs in Iceland HAM reformed and supported them both nights playing to massive crowds. They haven’t looked back since and tonight whip the Airwaves crowd up into a frenzy with bone crushing riffs and baritone vocals as deep as an Icelandic fjord. It’s a great way to wrap up a Thursday night.

A quick google search of President Bongo will reveal Omar Bongo, former president of Gabon who ruled the country from 1967 until 1999. However the man before me this Friday afternoon in Lucky Records is not him although both sure can rock a moustache. This is Stephan Stephensen formerly of the legendary Icelandic band GusGus and here he presents some tracks from his latest album Serengeti which while retaining the same engine room sound as that band also brings something fresh to the table. Elements of minimal techno mesh with trippy sound effects that takes us on a journey into sound. I was going to say you can almost sense the Serengeti but an icy blast of the Icelandic wind in the door puts paid to that idea. Great stuff all the same. I can still feel the bass reverberate in my chest as I cross the road to Hlemmur Square just by the bus station where TRPTYCH are playing. It’s happy hour when I get there and in a country where a pint will set you back €7/£5 it’s a very happy hour when you pay half price. Pint you say? Sound I will and I’ll have some nice and deep techno to go with it. Collapsing into a couch beside the stage soon my feet are tapping and head bobbing to this very talented duo. Just what the doctor ordered. 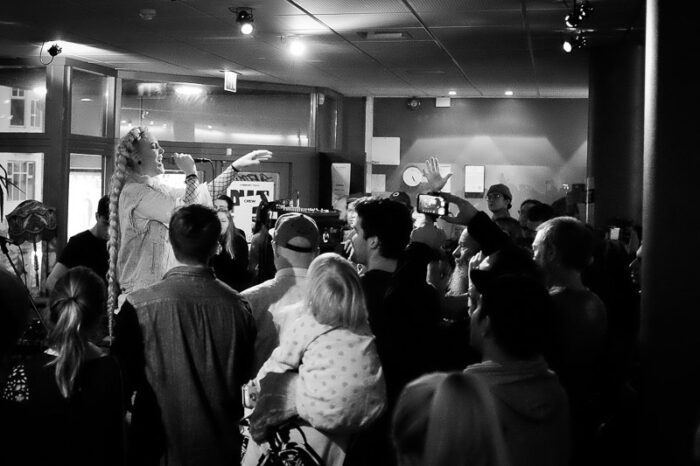 At 5pm I meet some friends at Bio Paradis which is a cinema located just off the main street. Having missed the official show by Sykur the day before I’m determined to catch them at this off venue gig. I’m not the only one as the place is full to capacity by the time Agnes Björt Andradóttir and band take to the stage. If there was ever a group to get you moving then Sykur is it. The finest electro known to man or woman soon has the crowd going wild and before long Agnes is dancing on tables while those who couldn’t make it inside look in the window longingly. Great fun. From a cinema to a record store then as I just about manage to squeeze in the door at 12 Tonar where a large crowd has gathered for Singapore Sling. It’s no wonder either as this is their only show at Iceland Airwaves and they only perform every two or three years at the festival. The five piece psyche outfit tuck themselves in front of the window while those who can’t make it inside watch from the street. There are slight problems with the sound at first but that soon gets ironed out as they deliver lysergic laden tracks such as You Drive Me Insane and Let’s Go Dancing complete with thunder rolling basslines and echo drenched guitar. By the time I tumble back out onto the streets of Reykjavik I’m glad I made the effort to go and see them.

It’s not every day you get to see a father and son in the same band so it’s over to yet another old cinema, Gamla Bio, I go to check out Stereo Hypnosis. Here there are three members manning all kinds of electronic gadgets while clouds and waterfalls are projected on a screen behind. Synthesized ambient passages merge with ethereal guitar strokes to take things down a notch or ten. It’s just what is needed at Airwaves after all the rushing around from venue to venue. Bringing to mind Popol Vuh and Biosphere in places this is ambient electronica at it’s finest. Heaven.

The night at Airwaves ends in NASA where I go to see a band totally unrecognisable from the last time I saw them four years ago. Back then Fufanu were a two man techno outfit called Captain Fufanu tearing the place up in the now sadly closed venue Faktory. At that time they were all set to release an album but the theft of their laptop meant they lost the masters and they were forced in a re-think. Before me now is that re-think. Five members ready for battle and prowling the stage like men with nothing left to lose. Gone is the techno of the old era. This here is some new improved shit. Post punk, psyche and new wave collide to deliver a set that has the large crowd gathered roaring their approval while I’m left flabbergasted at how a band could change so much, and for the better. Without a shadow of a doubt one of the highlights of the entire Airwaves festival.

All words by Emmett Mullaney. More writing by Emmett on Louder Than War can be found at his authors archive.