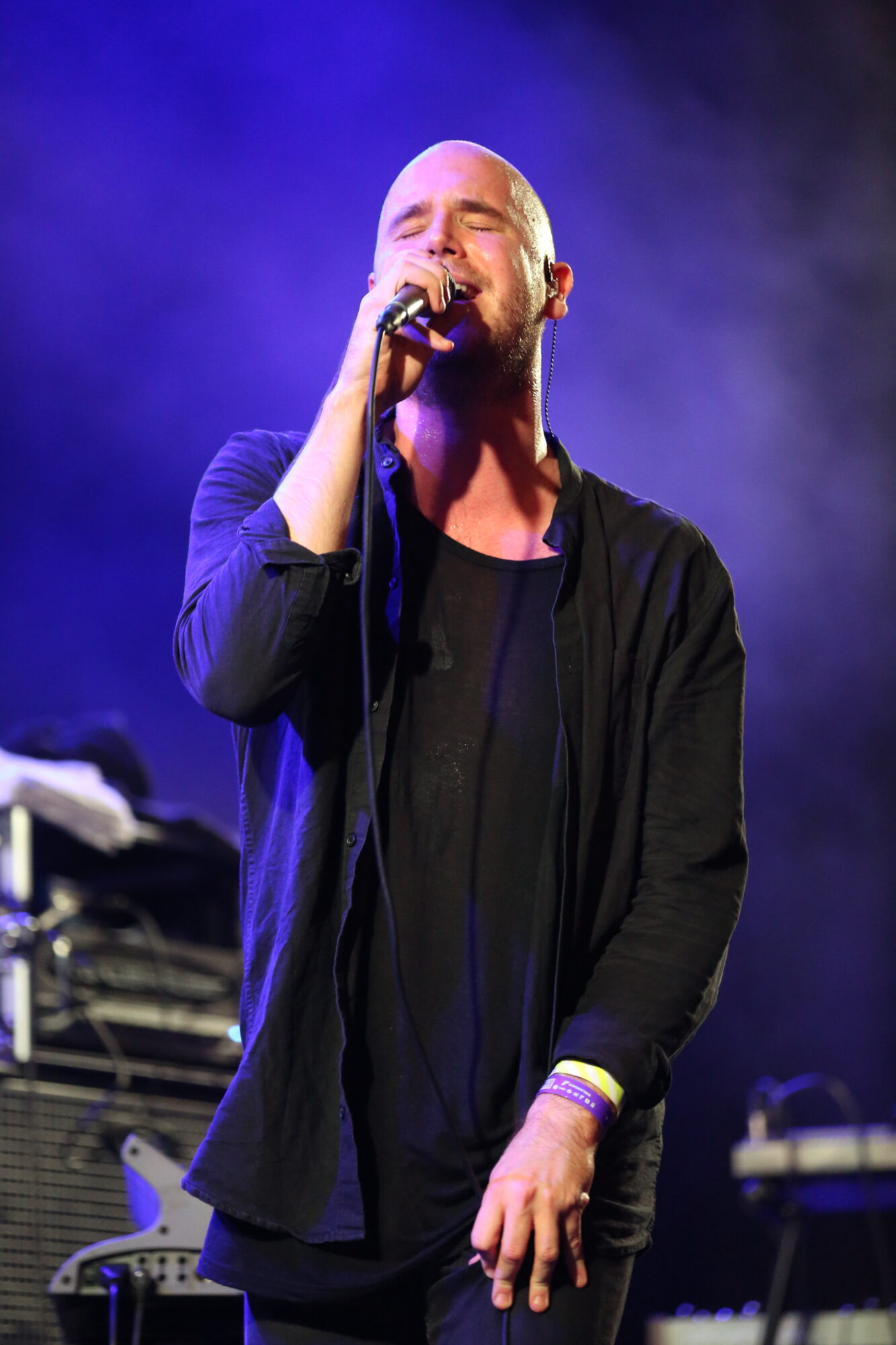 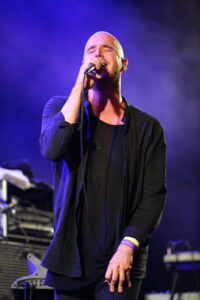 Heads are very delicate on Saturday afternoon at Iceland Airwaves in the Laundromat Cafe. However the very man who can wash the hangovers out of them is here. Indeed Berndsen promises to do just that asking everyone who is feeling the effects of the booze to put up their hands. About two thirds of the crowd raise their sore paws before synthesizer arpeggios provided by the magnificent Hermigervill cut through the grog fog like a knife. Backed on his other side by a guitarist Berndsen launches into a great set of electro pop including the brilliant Gimmi Gimmi. It’s not long until his shirt comes off and the place feels like a party on a Saturday night rather than a gig at 1.30pm. Massive fun.

There’s no need to move as Arni Gretnar aka Futuregrapher is up next. With four of his own gigs, the show with Royal (mentioned in part one) and his performance with pianist Jon Olafsson (their collaborative effort Eitt being album of the year in my book) in the church by the pond the co-owner of Möller Records is one busy dude. Here he treats us to a great set filled with ambient passages and electronic beats and bleeps that wash over the perked up crowd gathered shaking off any remaining cobwebs that remain. As always it’s a pleasure to catch him live.

Krummi Björgvinsson is in many bands including the mighty Legend and Mínus. Here with DÖPUR along with his talented girlfriend Linnea on bass he assaults a Telecaster to within an inch of its life. Programmed beats come crashing down like hammer blows to the face while guitar chords of post punk edginess envelop the dimly lit Gaukurinn venue. The crowd gathered step forward warily, not sure what to expect, but are soon leaning forward anticipating every note. It’s impossible to over emphasise how fucking good the guitar sound is here. Combined with the bass and the programmed computer beats it sounds like a tank is trying to break through the walls. To top it all off he played the whole gig with a broken finger. Unreal.

The night ends in the same venue where doom metal band Momentum are playing with chamber punk act Malneirophrenia. It may seem odd to see a cello on the same stage as a metal band but it definitely works here. A wall of sound erupts, drink is spilled and heads start banging. My ears are still ringing as I leave the venue just before midnight and shamefully have an early night. Maybe starting drinking at 1pm wasn’t such a good idea after all.

The early night pays off however as Sunday morning starts off nice and chilled in KEX hostel where as usual for the last day of Airwaves most people are still in bed having overdone it the night before. It’s just gone noon when Gunnar Jonsson Collider takes to the stage. I actually caught his official show on Thursday night complete with trippy visuals projected on a screen behind him but here the multi instrumentalist has just a laptop and electric guitar at his disposal. The sun shines in the large windows of this former biscuit factory as ambient tinged electronic pop fill the air. Great stuff and a wonderful way to start the day.

After another dose of DÖPUR, this time at an off venue show in Lucky Records which kicks ass, a quick look at the excellent festival app reveals that Mark Steiner & His Problems are playing In Dillon Whisky Bar. Being a big fan of that particular establishment I take myself up there and take a seat on the floor just as the music is starting. It’s just Mark himself up there with an electric guitar and a few pedals so he treats us to a half hour of songs that bring to mind Guided By Voices in places. It’s a very pleasant way to spend the afternoon.

This being Sunday and the last day of the festival there isn’t as much happening around town as the previous days. This is no harm at all as it makes those decisions over who to see so much easier.  Apart from a handful of venues most of tonight’s action is taking place in the massive Vodafone Hall, beside the home ground of F.C Valur near the domestic airport. It’s only about a twenty minute walk from the city centre but it’s far enough away to ensure that once you’re there you’re in for the night. Last year The Flaming Lips and The War on Drugs played a double header here but this year there’s far more choice as apart from a full line up of bands on the ground floor there’s also an Extreme Chill showcase going on in the smaller room upstairs providing some much need solace from the crowds. I get there at 7pm thinking that Vök had finished their set but end up seeing them again as there’s a delay meaning the next few acts have to cut their sets a little short to make up for lost time.

Upstairs Jonas Sen keeps things on ice with a nicely chilled ambient set that has people sprawled out on the floor with their eyes closed while back down in the main hall a man who I’ve wanted to see ever since a friend posted a video of him beating the shit out of some cymbals at last year’s festival is ready to go on. Emmsjé Gauti takes to the stage with a full band including a guitarist, bassist and the flame haired Keli on drums. It’s nearly impossible to describe how big hip hop is in Iceland without experiencing it first hand but suffice to say it’s massive up here. Despite this apart from attending a video premier from Shades of Reykjavik on Tuesday night I haven’t caught a single hip hop act all week. Still though if you only catch one act in this genre then Emmsjé Gauti should be it. My highlight of this set has to be the excellent track Nýju Fötin Keisarans with it’s almost Islamic call to prayer like vocal sample echoing through the chorus like the sound of one thousand minarets. Crowd surfing ensues and I even get the cymbal crashing I’ve been craving so much. Top drawer.

Agent Fresco are up next. To be honest I had pretty much written this band off as not being my thing even though friends kept telling me I had to see them. Never a great one for taking advice I had avoided them at the last few festivals but now I find myself quite curious as to what all the fuss is about. It doesn’t take too long for me to find out. Vocalist Arnór Dan works the crowd like a pro with his falsetto cutting though the math rock type stylings of the band. An half hour later I’m thoroughly entertained and so glad I managed to see them live at last. Back upstairs Jónas Þór Guðmundsson who goes under the monkier Ruxpin is playing. I saw him last year in a cinema with Björk in the audience and have been looking forward to catching him again. This time he’s wearing a mask but there’s no disguising the ambient electro genius before me tonight. With eight albums under his belt so far he gives us a gorgeous set of soaring electronic passages combined with down tempo beats all set against a projected backdrop of interesting visual images. Once again I’m left gobsmacked. Brilliant.

Down in the main hall Hot Chip are getting their groove on with a cover of Springsteen’s Dancing In The Dark that goes down a treat with the huge crowd gathered. A trip outside for a smoke break proves fortunate as the Northern Lights make an appearance, dancing above the Reykjavik skyline as if almost feeling the festival vibes in the city below. After a few ooos and ahhs the lights fade and it’s time for the final act of the whole festival. A party band is what’s needed to cap one of the biggest parties of the year and who better than local legends FM Belfast for the job. A gang of them, including a former diplomat no less, arrive on stage covered in glitter and streamers as if trying to outdo The Flaming Lips who closed the festival in the same venue last year. Bouncy electro tracks such as Par Avion and Stripes follow with confetti filling the air like a church wedding only this is more like 2am at the reception back at the hotel with everyone well juiced. The whole crowd are jumping with huge grins and then we get the one we’ve been waiting for. The hall erupts with the track Underwear as we all sing the chorus in unison and yet more streamers and confetti fill the air. Shirts and pants are thrown off as if it’s the last night on earth and it might as well be as it’s the last night in Reykjavik for many including myself. The last song finishes and the band depart the stage until we are all left looking at each other with that special kindred glow in our eyes. The lights come on and a spontaneous group hug involving fifty people happens on the floor. It’s a lovely sight to behold and a reminder of the community of like minded souls that have grown around this festival since its beginnings in 1999.

So another festival over and another countdown to the next one. May the circle never be broken.

All words by Emmett Mullaney. More writing by Emmett on Louder Than War can be found at his author archive.