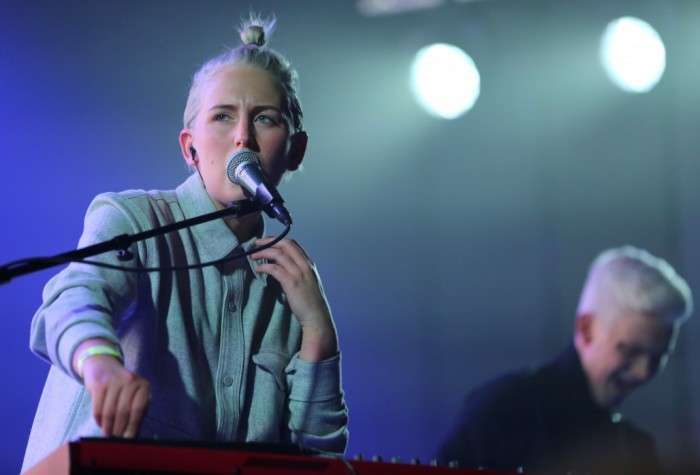 Touching down in Keflavik always gives me a warm and fuzzy glow but this time I know half the plane as it’s the first time I’ve been able to fly direct from Dublin. My previous four Iceland Airwaves jaunts involved lengthy waits for connections in either Gatwick or Copenhagen often not in the best of health on the way back. But hey, that’s the price you pay for a week of partying in the craziest town on Earth.

Monday night at Airwaves kicks off with a party in KEX hostel with an Irish music showcase organised by Feel Good Lost. I manage to miss the first two acts while attending a friends going away party but get there in time to see Daithí tear the roof off the place with a mixture of synthesised fiddle, loop stations, Kaoss pads and general madness that has the place going buck wild. He drops his new single Mary Keane’s Introduction which samples his 90-year old grandmother talking about the good old days and I’d say she’d get some shock if she saw the leaping and hollering that the track causes. It’s a fantastic gig which leads to an after party in a pub up the road for more drinking and carrying on. Bear in mind this is only Monday and  Airwaves festival doesn’t start for another two days!

Tuesday brings a beautiful bright blue crystal clear sky and after a walk around the city I end up in Dillon Whisky Bar where Morning Bear are playing. From Denver, Colorado their nice blend of indie folk brings to mind Bon Iver in places and it’s a nice way to ease myself into another day of musical magic in Reykjavik. Up next in the same venue is ÍRiS. The stage is bathed in a crimson glow as she channels the spirits to bring us Fever Ray like delicious darkwave goodness closing with the sublime track The Witch. Having never seen her before I leave suitably impressed and eventually end up in Lucky Records to see post-hardcore band Endless Dark, a seven piece who remarkably manage to squeeze everyone onto the small stage in the corner of the shop. There’s no stage that can hold these lads however and it’s not long before they are leaping off it almost on top of people sitting on the floor at the front. They nearly shatter the windows with the power of their sonic attack and screaming into the mic. Not a bad way to end the night. Except it doesn’t end there. It’s back to Dillon until closing time and wrestling on the street at 1am. The less said about that the better!

The first day of the Airwaves festival proper sees me back at Lucky Records at 3pm to catch troubadour Svavar Knútur. Having caught him last year I’m greatly looking forward to his blend of quirky folk songs and amusing between song banter and it takes all of one song before he has put a smile on the faces of everyone gathered. Twenty minutes later he finishes with the excellent Girl From Vancouver and I can leave the store contented. Except I don’t. I have a comfy chair so I stay for the next act Mosi Musik. Elements of disco, pop and electro collide to bring a real party atmosphere to proceedings to Airwaves. Great stuff. And the bassist has a really cool hat!

There are a lot of great venues in Reykjavik during Airwaves but if it’s music of the extreme variety you’re after then continue past Harpa concert hall, don your leather jacket and climb the stairs to Gaukurinn where the bar staff have the greatest tattoo’s and haircuts in town. It’s just 8pm when black metal five piece Sinmara stroll onto the stage looking like they climbed out of the nearest graveyard and unleash hell on those of us that know that singer songwriter chin stroking ain’t going to cut it at this time of night in this venue. The place goes mental and a mosh pit immediately ensues One guy loses his glasses and the moshing promptly stops while about ten phones (including mine) come out to shed light on the situation. Once located and back on his face the mosh pit erupts again and the place goes berserk. Fantastically nuts.

After this I leave to go to another venue, get laughed at when I ask for the WiFi code and am pointed to a sign on the wall with the longest most complicated code I’ve ever seen. It takes me nearly five minutes to get it work at which point I get a message to go back to Gaukurinn as Muck are on next. I get there just in time as this punk rock four piece are tearing the place apart thrashing their guitars to death and wailing out solos while skin and hair go flying in the front row. It makes me wonder why I left the venue in the first place. Leave it again I must though as Royal are playing in the recently re-opened venue NASA. I grab a spot at the very front and have the perfect view to see Borko bashing out tribal rhythms on the drums while Arni mans the electronics when not dancing around like a man who has a Jane Fonda workout video or two in his collection. It’s fabulous fun and definitely the best gig of the day for me.

The night finishes in Harpa where Vök are playing. This band started less than three years ago but have made great strides in the Icelandic music scene since then. Their dreamy saxophone fulled electronica finds a receptive audience here especially with the sublime track Waterfall. Less than an hour later I’m making my way back towards my lodgings totally spent but full in the knowledge that I’ve seen some great bands tonight and that the Airwaves festival has only just begun.

All words  by Emmett Mullaney. More writing by Emmett can be found at his Louder Than War Authors archive.