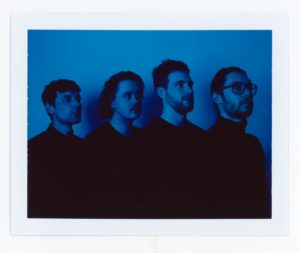 Louder Than War’s Ioan Humphreys finds another angular, post punk band to add to his favourite bands so far in 2018.

Ice Baths are a four-piece band from London who are set to release their self-titled debut album on 11th May via Blank Editions. Blank Editions is a renowned boutique label who released the latest Thurston Moore 7”, therefore Ice Bath’s post-punk sound is a natural fit for the Label.

Citing influences such as Swell Maps, Television Personalities and Devo, the band (Alex Ives, Thomas Cleall, Ed Shellard & Jack Davis) had a very clear idea of how they wanted the record to sound and that included a long, pain-staking period where ideas were scrapped and reworked. “It was an absolute challenge, we were very picky about how to get the sound we wanted. It led us to mixing the record ourselves. We wanted the record unpolished and raw, hissy, trebly, bitty & a bit uncouth” says Alex. To achieve the desired effect, the album was recorded on a selection of different Tascam tape machines – a move to retain the grittiness of early demo’s as well as the spike their live shows are known for.

Ice Baths have been on the London circuit for a short while now and they‘re a notoriously tight live band. “We’re pretty excited to be released on a label with artists we really respect; it’s a confidence boost that perhaps we’re on the right track. We’re proud of the album the same way you might be proud of an errant child”

You can tell from the opening bars of this brilliantly named track that Ice Baths represent something different and are seemingly taking no prisoners. A slight, repeated four note guitar flourish leads to big spiky slabs of noisy bass, drums and guitar. They then lead into an elongated bassy and angular guitar riff that runs throughout.

Vocals come in low in the mix which I really like. Spikier guitar is added on top before a nice bassy breakdown halfway through. Before the last third, there is a barrage of noisy guitar, loud percussion and the repetitive instructional vocals.

The added guitar flourishes at the end actually sound out of tune which again I fucking love. There is immediacy to this track that smacks you around the face and makes you stand up and take notice.

There are echoes of Joy Division to Ice Baths, but this is lazy comparison. This band has the production, tone, riffs, timing and tightness of a brilliant outfit with an urgency that is most welcome these days. Just brilliant stuff. More Ice Baths please!

The band played the Lock Tavern, Camden on March 17th and have a tour planned for spring.

Ice Baths’ self-titled debut album is out on Blank Editions on 11th May.

Ice Baths can be found on their Facebook and Soundcloud.