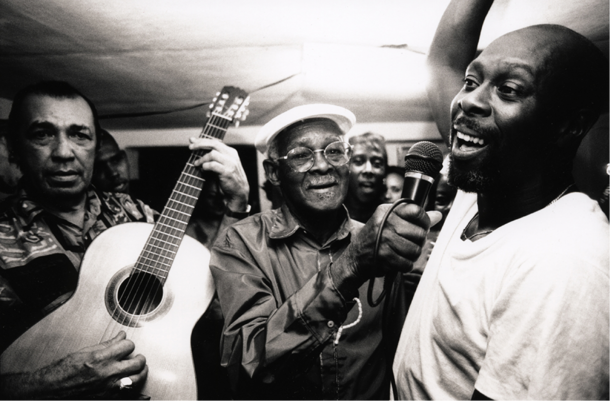 Fans of the Buena Vista Social Club (and let’s face it, who isn’t?) will be thrilled to hear this brilliant never-before-heard tune from the late great Ibrahim Ferrer.

It’s one of four new tunes from the original recording sessions for the Cuban maestro’s landmark second album, Buenos Hermanos, about to be reissued by World Circuit in a special new edition, remixed and remastered by producer Ry Cooder, with new artwork, photos and liner notes.

An elegant and emotional bolero – the style Ferrer became famous for – Ojos Malvados (‘Wicked Eyes’) was composed by Cristina Saladrigas, one of the few women in the early days of traditional Cuban ‘trova’, and features Buena Vista alumni Orlando “Cachaíto” López, Manuel Galbán and Angá Díaz, as well as Joachim Cooder on drums.

“That’s where you hear Ibrahim in his true métier, as they say – those old slower songs,” says Cooder. “The delicacy and his vibrato is perfect for those tunes.”
Originally released in 2003, Buenos Hermanos won critical acclaim as an audacious and assured album firmly rooted in tradition, whilst expanding the horizons of 21st Century Cuban music with its varied repertoire and modern sound.

A global hit, aided by the success of the 1999 film Buena Vista Social Club and accompanying album, it earned Ferrer a Grammy – but he was unable to collect it because the US government would not let him into the country. He died in Havana in 2005.

“It’s better than ever, if I may say so,” comments Cooder on the new mixes. “We went back into the session tapes and found songs that were overlooked for some reason, and you’re going to be as thrilled as I am. We’ve really polished it up and improved it and expanded it, it sounds almost brand new. There’s one thing for sure: we need something good, something beautiful in these days and times.”

The reimagined version of the album also has refreshed cover artwork, featuring an alternative photograph from the original album shoot by Christien Jaspars. As well as digital formats, the release will be available as a CD casebound book and 180g heavyweight double vinyl, with both packages including English and Spanish lyrics, and a new foreword from Ry Cooder.

Having retired from nearly 40 years of performing, Ibrahim Ferrer was shining shoes in 1996 when he was approached by Afro-Cuban All Stars’ band leader Juan de Marcos González to sing on the sessions that would become the original Buena Vista Social Club album. The record was released to phenomenal reception the following year, going on to sell over 8 million copies and catapulting Ferrer and his fellow musicians to international fame.
Buenos Hermanos followed Ferrer’s first solo album Buena Vista Social Club Presents Ibrahim Ferrer and was hailed at the time as a selection of fresh takes on classic songs and thrilling examples of the romantic ballads and boleros for which Ferrer was famed; it won the Grammy for Best Traditional Tropical Latin Album.