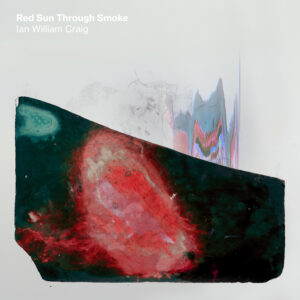 It seems that the whole world is burning as our planet warms up and Ian William Craig’s new record is based on his first-hand experience of this terrifying phenomenon that threatens our very existence as a species.

Vancouver based Craig has returned to the piano as he recorded his eighth album over two weeks in his grandfather’s house as forest fires raged around Kelowna in British Columbia. The record is given extra depth and poignancy by the fact that Craig’s grandfather, who was living with dementia in a care home across the road, is clinging onto life as his lungs are filling up with fluid because of smoke caused by the inferno.

If that turmoil wasn’t enough Craig has just fallen in love….but with someone who lives 5000 miles away. And then halfway through the recording his beloved Granpa died.

You need all this information to really process an album that was being created in the midst of intense physical and emotional turmoil. Craig sits down at his Grampa’s piano to compose with the only other instrument being his voice, plus a shortwave radio set as his grandfather was a keen radio ham, several of his trademark broken tape desks and a bunch of tape loops.

That lack of high-tech fits perfectly the sombre and at times eerie feel of the record as an old cassette player becomes an ad hoc studio looper as Craig plays with sounds, and adds layered, off kilter vocals based on thoughts from his own diaries. There is a beautful line in Last of the Latern Oil where he describes his family sitting down to have ‘grief with supper.’

All this upset might have led to a similarly confused and chaotic album, but it’s no accident that Rolling Stone described Craig as the most exciting experimental composer of 2016 as he’s a crafty writer who has created a fascinating work melding his interest in the natural world under threat right before his eyes, and also the sense of deep loss he was feeling.

In some ways opener Random is atypical as it is only Craig’s voice before the mashed-up piano and choral layering of The Smokefallen begins the journey into the fire. It is a tribute to Craig’s skills that you can almost feel smoke swirling round you. It is a really surreal feeling.

There is power in the simplicity of a piano driven tracks like Supper that crackles with extraneous sounds like a badly tuned radio, or the equally simple album closer Stories, which is a moving reflection on what happens when dementia slowly robs a person of who they are.

This isn’t an album that you can just have playing in the background, but it worth sitting quietly in an armchair as Craig somehow takes you into the heart of a forest fire raging away on the other side of the Atlantic.