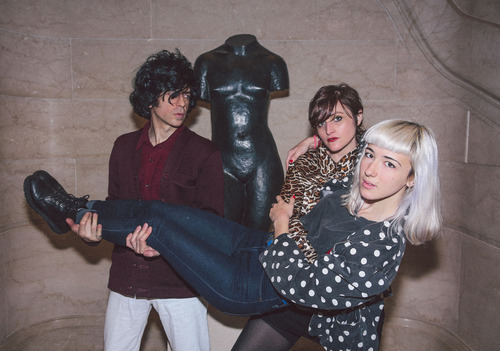 Chain And The Gang’s New Album Minimum Rock ‘n’ Roll is due out in April on Fortuna POP!

Watch the album commercial below (and feel free to share!)

*more to be announced!!

Fortuna POP! are beside themselves with excitement to welcome the incredible CHAIN AND THE GANG to their ever-increasing family, with the release of their fourth album MINIMUM ROCK N ROLL on April 14th. Led by the remarkable Ian Svenonius, prime mover behind two of the most essential bands of our time, Nation Of Ulysses and The Make-Up, and author of two books, The Psychic Soviet and Supernatural Strategies for Making a Rock ‘n’ Roll Group, not to mention online talk show host and auteur filmmaker, Chain And the Gang deal in a new genre called CRIME ROCK that updates rock n roll, blues, and gospel music or vocal quartets from the late 50s /early 60s for the discerning few.

Chain & the Gang bring their dynamic live show to Europe in May and June with three confirmed UK dates including Liverpool’s The Kazimier, Brudenell Social Club in Leeds, Broadcast in Glasgow and London’s Tufnell Park Dome.

A gang with a fluid and floating active core, Minimum Rock N Roll was recorded in Portland Oregon with Ian and Katie Alice on vocals, Brett playing the electric guitar, Chris on electric bass guitar, and Fiona driving the drum kit and then mixed down in DC by Brendan Canty. More minimal and more ferocious, more lean and more mean, Minimum Rock N Roll is Chain & the Gang looking for food, hungry and intent on devouring the known world, once they find its tender underbelly.

Svenonius says of the album: “MINIMUM ROCK N ROLL is a challenge to all the tiresome groups with no content, no heart, no soul, no direction, who parade around like mediocres onstage with an inherited diagram of acceptable behavior. What are they striving towards? A slot at a festival? Chain & the Gang want it all. They want justice in this universe and the other ones in the other dimensions. And that starts with aesthetic justice. MINIMUM ROCK N ROLL is naked, raw, catalyst, creepy, crazy, cretinous…”crime rock”. Minimum Rock n Roll uses fewer beats, fewer words, fewer ideas … “why pay more for unneeded words rhymes and riffs?” is the philosophy behind the album. It’s a purely distilled rejection of the indie rock prescription for enforced brain dead, artless mediocrity.”

Minimum Rock N Roll is a protest against a world where everything is available … the internet’s engorgement of the senses has bred a world that’s stupefied, self-satisfied and sedate. It’s time for a diet. This record is a kind of aural austerity! Barely any words! Hardly any beats! Fewer notes! Its just EXACTLY ENOUGH.