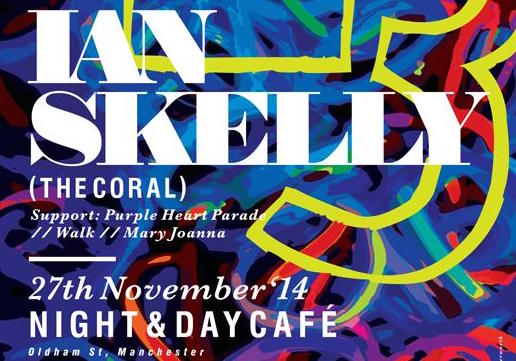 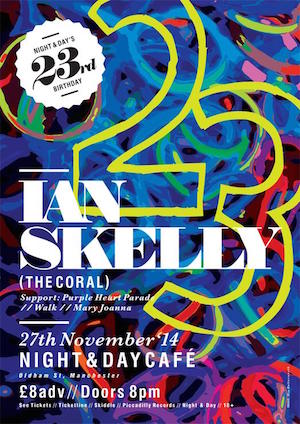 The Night and Day Cafe, Manchester

The recent subject of an unsuccessful abatement notice, Manchester’s iconic Night & Day Cafe has just turned 23, Louder Than War’s Michael Halpin was there to review.

It’s the Night and Day’s twenty-third birthday tonight and it’s a good job were here to celebrate it considering the noise complaint and threatened closure that hung over one of Manchester’s biggest supporters of local talent for well over a year.

Since the last time I saw Purple Heart Parade, they have acquired two new guitarists and sound light years ahead of the sound they made a year or so ago. The bass grooves more confidently, singer Cowap gets right in front of his audience and looks them straight in the eye.  Its all much more self-assured and all the better for it.

The dynamics of the music ebb and flow, and the octaves from the two separate guitarists play off each other beautifully. As Keith Richards and Brian Jones would say, “it’s the art of weaving – man”.
‘Moonlight Burn’ proves you can get just as great an effect out of a guitar effects pedal as u can out of a ‘haircut bands’ 80’s Casio keyboard as singer Cowap crouches to his knees at the foot of the stage while still managing to engage with every single audience member.  One of those ‘band moments’ then ensues as Cowap turns to his fellow psych explorers, falls to his knees and immerses himself in the bands cacophony – and what a cacophony it is – the sound is gigantic, vast and wonderfully expansive.

‘Petrol’ sounds like it could be Purple Heart Parade’s most commercial song with its Byrds-meets-Neil Young guitar riff.  The song is ruined however by microphone feedback. Cowap’s frustration is all too real but delivered with humour, “that song was called ‘Feedback To Fuck’!”

‘Starfucker Blues’ has a menacing descending riff that you could easily fall in love with while ‘The Room’ has mesmerising guitar harmonics, double tambourines from Cowap  and a  big psych freak-out ending which triumphantly draws to a close  a gallant set that shows just how far Purple Heart Parade may yet go.

…and so to Ian Skelly. The Coral drummer who is, along with the rest of his counterparts, on an indefinite hiatus. That said, they still seem to enjoy each other company. A year ago, Ian’s brother and Coral front man James Skelly toured his debut album with Coral bassist Paul Duffy, keyboard player Nick Power and his younger brother Ian all in tow. Tonight, once again bassist Duffy is there to lend his services, along a single guitarist a bongo player.
Opening with ‘Cut From A Stars’ title track, the instrumentation hints that we are in for a much stripped down set.  Two acoustic guitars (Ian Skelly being on the other one) an  acoustic bass and a set of bongos hint at a very different show to that which Skelly performed last year when touring with a seven piece band. That said, the lead guitar is lively and propels much of tonight’s set list along.

Member of Blossoms are in the audience tonight, The Coral link solidifying further (James Skelly is producing them at the moment) and there is a sense of, to paraphrase The Coral, ‘finding the feeling and passing it on’ to the next generation of neo-psych purveyor’s.

Skelly’s line up tonight, although minimalist, is resourceful and inventive and his personal take on how to replace a seven-piece band seems to be, ‘If you don’t have the keyboard effects, or indeed the instruments available onstage, simply whistle the melody they were meant to give!’ Skelly does this on several occasions tonight and it actually works!

‘Paper Sky’ puts one in mind of Richie Havens 1969 Woodstock performance – all strange guitar tunings and enthusiastic bongo bashing but just as the set is going well, Skelly gets a touch frustrated with the audience, “You’re either a shit crowd, or you’re all on really good drugs! Either way, I don’t give a shit!” The comment is half tongue-in-cheek but the audience does need a kick up the arse!

‘I See You’, ‘Firebird’ and ‘DNA’ all follow, showing that the talent within The Coral is immense and far too much for just one band to contain. Skelly sounds uncannily like his brother in parts and appears comfortable leading a band.  The comparison between Ian Skelly and Dennis Wilson are too easy but simply cannot be ignored. Both have stepped out from behind the drum kit, both appear equally as talented as their more extrovert brothers (okay, Dennis Wilson maybe not as talented as Brian Wilson but you get the picture…) and both have created music of real beauty.

‘It’s Only Love’ ends the set without an encore. Skelly is gracious in his thank you’s and although tonight was by no means a bad gig, there did appear to be something lacking.  The guitar playing was wonderfully imaginative and did more than enough to fill out the aural soundscape with panache.  Bassist Paul Duffy was as solid as ever and a set of bongos is always good to see! It did appear however, that parts of the set tonight were longing for the pastoral and down right unusual instrumentation that ‘Cut From A Star’ boasts. Sometimes less is more but sometimes less just isn’t quite enough.

All words by Michael Halpin. More from Michael can be found at his Louder Than War Author Archive.