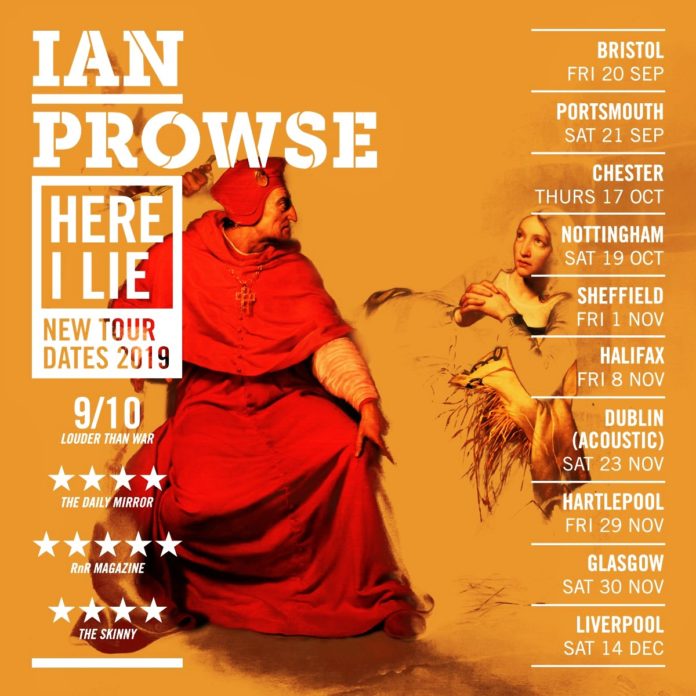 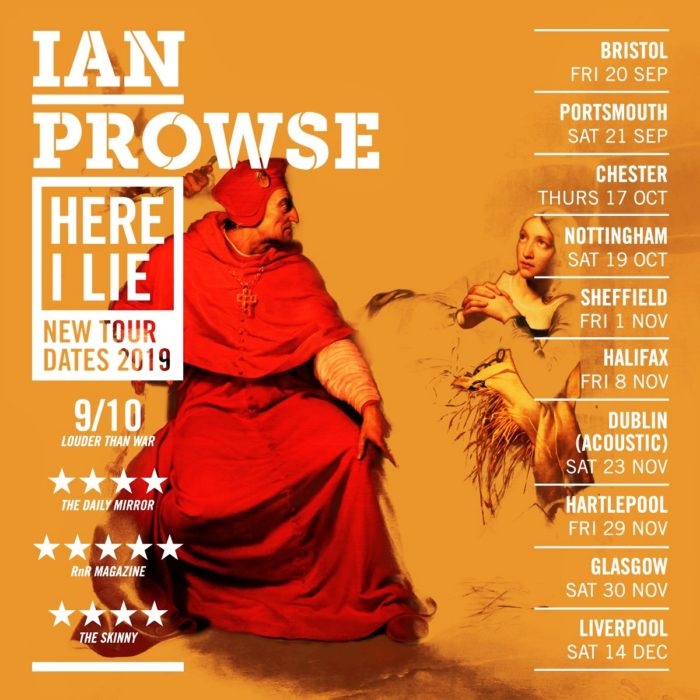 On a bitterly cold St Andrews night in Glasgow, a warm welcome awaited in the basement of the Admiral Bar. Ian Prowse and Amsterdam treated those who braved the elements to a jubilant celebration of life. The warmth was not just physical, there was a palpable enthusiastic passion abundantly apparent between Prowse and the gathered devotees.

Prowse and his Amsterdam sidekicks are touring to support the formers’ latest set of glorious songs, Here I Lie. Opening the set with the emotional Joseph, the new songs nestled like old friends amongst the highlight strewn set. Particular mention for the pick of the new songs must go to the emotional title track, Here I Lie. The already tender track, a conversation from beyond the grave, took on a whole other level of poignancy after Ian revealing it was written for his 8-year-old daughter so she could always come to him for advice in later life. If you haven’t heard the album, I urge you to rectify that now.

Does This Train Stop on Merseyside?

This level of intimacy and tenderness was revisited on a couple of occasions. None more so than during a timely rendition of Does This Train Stop on Merseyside? following the revelations from earlier in the week. After initial shouts of support for the 96, you could have heard a pin drop during the hushed moments in a passionate heartfelt delivery of the song.

Most of the night was a celebration though. As mentioned earlier, a clearly delighted Prowse and Co. romped through a set of crowd-pleasers. From way back in the Pele days, Fireworks made an early appearance in the set. And they brought things right up to date with what are some of the strongest songs of his career. The band stayed on stage throughout so as not to waste any time in the pointless leaving the stage only to return later routine. They ripped through the songs as if their lives depended on it.

This night was special. And not only for the party atmosphere on a bracing St Andrews night. Prowse had some close life-long friends in attendance. Namely Gareth (name-checked in the first line of the Ballad of North John Street) who remained defiant in his refusal to buy Prowse a brandy.

No party is complete without a party piece. Tonight we were treated to two. As it was St Andrews night, the band played a specially rehearsed version of The Waterboy’s classic Whole of the Moon. This had everyone gathered in the Admiral belting out every word.

There are also four individuals, the last gang in town, without whom we may not have had the pleasure of Ian Prowse company tonight. Strummer, Jones, Simonon and Headon got a special mention as the band launched into a perfect version of The Clash classic London Calling. Just shy of the 40th anniversary of the album’s release it was pretty special. 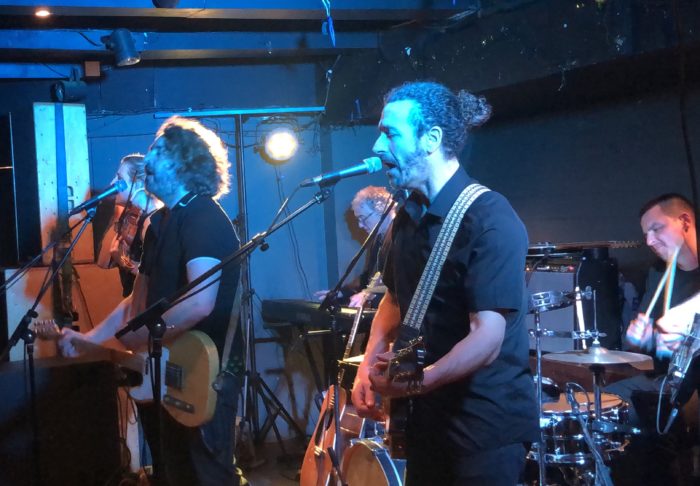 Sing-a-longs are the order of the day at gigs like this. As such two of the biggest responses were for the phenomenal celebration of an inspirational life and controversial death in the exceptional My Name is Dessie Warren. And as part of the encore, my gateway song to the future of all things Prowse, Raid the Palace. The wonderfully danceable condemnation of royalty is a theme brought right up to date on the new album in All the Royal Houses.

After a humorous dig at Ian McNabb regarding Prowse and Amsterdam securing a prestigious support slot with Elvis Costello in 2020, Ian proclaimed we were all on the guest list. He would open the back doors to let us in. Careful Ian, after tonight’s fantastic performance, you will have many willing volunteers taking you up on the offer.

You can find Ian Prowse at his website here.