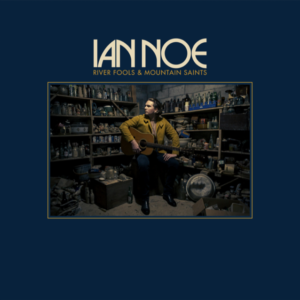 The Kentucky folk troubadour Ian Noe releases his second album, River Fools & Mountain Saints, following on from his critically lauded debut album back in 2019. It’s an album that draws heavily on the characters and cultural heritage of his native homeland with a bunch of songs which have a timeless quality to them, demonstrating what a great songwriter Ian is proving to be.

From the very first time you hear Ian Noe sing, you are left in no doubt that he is very much the product of his environment and that this is something that is totally absorbed in both his life and his music. Born and raised in Eastern Kentucky, Ian Noe’s music draws strongly from the Appalachian musicians from the early 1900’s who had such a significant influence on the development of country music, bluegrass and rock’n’roll.

Ian’s debut album in 2019, Between The Country, was critically lauded for its magnificent portrayal of both his surroundings and the rich cultural and musical heritage that is associated with his homeland. And there is little doubt that this follow up album, River Fools & Mountain Saints, is every bit as stunning as that debut as it paints more pictures of contemporary and historical life in the region all wrapped up in tales of heartbreak and loneliness. With the clarity of Ian’s vocal delivery and the authenticity of his sound, this is an album that captured my attention in a way I never thought possible nor expected.

Much of the album was written in quarantine over the past two years so there is more than a nod to the impact of the pandemic as well as a degree of experimentation in sounds that this freedom of time allowed. But there is also a strong lyrical reference to the major floods which had such a destructive impact on the south-eastern part of his homeland State in early 2020, so the album as a whole will forever live as storyboard of hardship and suffering whilst also somehow managing to find a positive spin on things. In this respect we should all be able to draw inspiration from both the sounds and the narrative which emerge from the grooves.

The first single from the album, Pine Grove (Madhouse) is a swaggering ode to party houses and pandemic isolation, opening the album with the line “stranded in a madhouse”, and all set within a perfect blend of country and folk with a luscious pedal steel running throughout. As Ian explains, “there’s no denying this album was made during a pandemic, so figured I’d open it up with the word ‘stranded’. This song is about being stuck, being isolated, but making the most of it”. And therein lies the key to the narrative in that there is always a way out from all of this madness if you stick with it and persevere.

River Fool is a classic blast of acoustic country twang that would befit any album by Johnny Cash or John Prine as it appears to reminisce about his time working in the Lee County oilfields in his more formative years. Lonesome As It Gets takes an ever deeper introspective view of himself through difficult times as he reflects on life whilst living alone in his grandparents house. With a melody dominated again by the pedal steel it’s an emotional and very personal statement concluding with the line “I’ve been stranded in the rain so long, I don’t know what’s wet”.

Strip Job Blues 1984 is driven by acoustic guitars and fiddles as it regales a tale of a local working-class hero in the mountains. And Ian’s penchant for honouring the indigenous people of his region and the cultures that are inherent amongst them all continues with the acoustic ballad Burning Down The Prairie and the laments for the town’s army veterans through Tom Barrett and the rocking POW Blues.

Ballad Of A Retired Man is a stark and stripped back acoustic paean for a lost loved one full of pain and sorrow which really tugs the heart strings. Mountain Saint is yet another character study focused on a desperate woman seen hustling weed in the foothills with money that I guess would not even feed her family back home. We even get a haunting French horn bringing a degree of solace and solemnity in One More Night as Ian tells a tale of a journey in vain.

The final two ballads defer back to the floods of 2020 as they portray a grim and desperate time. Appalachia Haze offers some degree of optimism in the face of adversity, whilst Road May Flood/ It’s A Heartache speaks more of loss and desperation as it weaves in a verse and the melody of the classic love song most notably recorded by Bonnie Tyler in the late 70’s.

There is little doubt that Ian Noe draws considerable inspiration from the likes of John Prine, Bob Dylan, Townes Van Zandt, Neil Young and Bruce Springsteen in honing his exceptional songwriting style and he cites Alabama Shakes self-titled debut album as a key record which led him to work with producer Andrija Tokic. The sound on this album was also augmented by the notable presence of both “Little“ Jack Lawrence (The Raconteurs) on bass and Derry deBorja (Jason Isbell & The 400 Unit) on keys.

Ian Noe is an artist who has a truly unique ability to paint intimate portraits and beautiful images through his words and his music, with songs which are centred so much on people and characters from both the past and the present. River Fools And Mountain Saints is full of songs which have such an intimate and introspective quality focusing on loneliness, despair, heartbreak and loss, yet which still manage to convey a sense of defiance and optimism in the face of obvious adversity. But more than this, Ian Noe’s songs have a timeless quality such that you are able to connect with the story the first time you hear it.

Ian Noe is already booked to play Lafayette in London on 31 May 2022 and the End Of The Road Festival in Dorset in September 2022, with hopefully more UK headline dates to be announced soon. With two great albums now behind him there really is no better time to see this Kentucky folk troubadour perform.