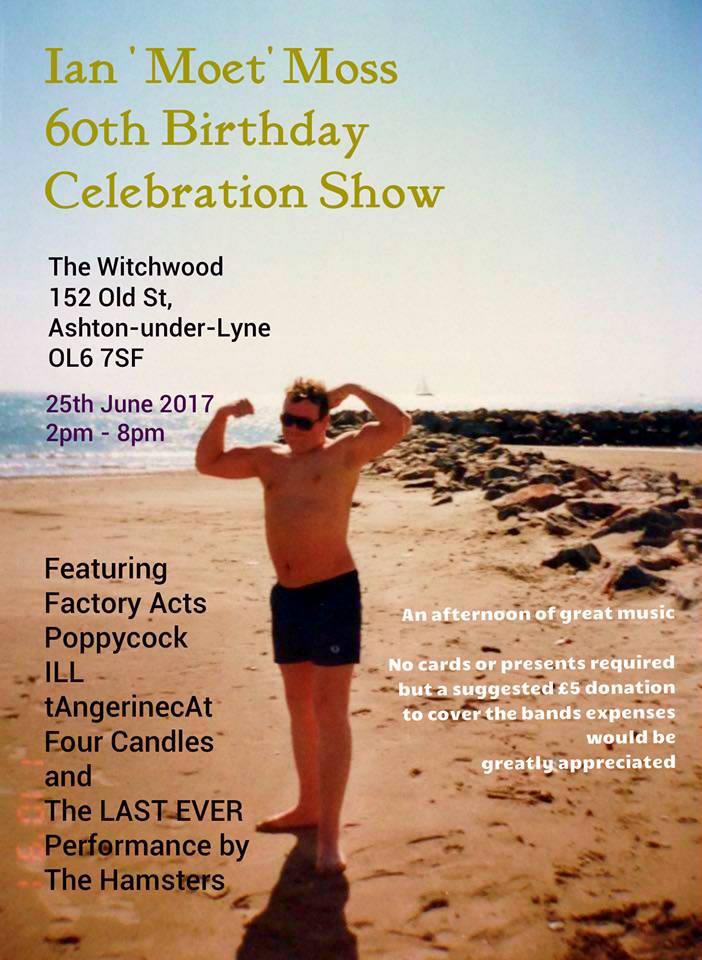 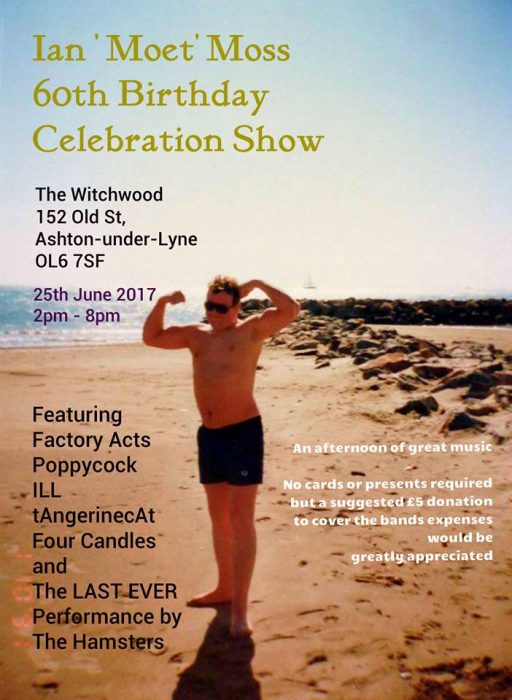 **Note: This piece was written prior to the Manchester Arena massacre**

Ian ‘Moet’ Moss is a larger than life, living legend in his own lunch-time.

A rabid music fan, he is one of those singers who hasn’t let the fact he can’t sing ‘properly’ stop him fronting bands and making music since the late ’70’s.

He was at the Pistols Manchester Lesser Free Trade Hall gigs. His band the Hamsters released music on Mark E Smiths Cog Sinister label. He had a book written about his exploits and following heart surgery and a brush with cancer the label he co-runs German Shepherd releases new and strange music on an almost weekly basis.

To celebrate his 60th Birthday he’s having a full-on gig extravaganza – see poster/pic)  so I asked him if he like to pick a Top Ten Albums for LTW on whatever theme he wanted.

Manchester -was the answer – but not the Pop Cultural Tourists Guide, the real, nitty-gritty heart of the city – and LPs by artists which reflect that…. So, No Stone Roses or New Order mate.

Happy Birthday Moet, and many more.  (I asked a few of his closest mates if they wanted to say a few words…they are at the end ! )

So, in no particular order …over to Ian. (Getting it down to ten is near impossible, there are loads I’ve missed, but...)

What was once a must-have bootleg of the nascent Howard Devoto fronted Cocks which has been made legitimate in the intervening decades, catches the band running through their live repertoire in one of two takes revealing the delicious sly humour within Howard’s wordplay over the thin brittle but somehow tuneful noise created by Pete, John and Steve Diggle , along with Sex Pistols ‘ Spunk’ this is the authentic sound we heard all those years ago .


Gnod have for a long time been the most important band across the Salford / Manchester divide , they embrace change on a regular basis where others are content to exist inside a pigeon hole they can present you with ‘ minimal techno’ ‘ spacey Germanic jams’ ‘ a hint of Jazz’ or as here on this album enormous riffs and Paddy Shines howling vocalising , a cry of defiance full of spirit , intelligence and honesty , hats off to Gnod

Rochdale native and Crass affiliate Andy is one of life’s good guys , he wears his heart on his sleeve and tells it like it is , I’ve known Andy since he was a teenage fanzine writer and Hamsters fan , this Album/ book is the essence of the man alternately tender and tough his sincerity shines through each brutally painful track ‘ Sophie’ his response to the murder of ‘ different ‘ teen Sophie Lancaster reduces me to tears with each listen

Despite recording the abysmal and irritating Manchester City theme song in a previous incarnation 10cc were , are and I presume will remain my favourite Mancunian treasure , there songs were quick witted and cynical dressed up as glorious pop , they were in effect a superior ‘ Steely Dan ‘ without drawing anything like their American cousins acclaim , Sheet music is the pick of their first five classics , I love it , Wall Street shuffle , worst band in the world and Old wild men would all be amongst my desert island discs

The Prick Jagger’s  – the Golden Ass

The cleverest , wittiest and most audacious band I’ve ever had the pleasure of seeing perform , in Sheffield I saw them drive three quarters of a trad rock audience from the venue affronted by the lack of musical chops and none existent stage presence , they were neither surprised nor upset , content to do what they do brilliantly well their own way , this album is a gem , Lou Reeds Supper Club was a huge hit in a better parallel universe and I’ve had the privilege of joining them onstage to sing the chorus a couple of times.

Una Baines was a former founder member of the Fall and Blue Orchids but her strongest recorded work is on this album , it reflects Unas personality perfectly , it is melodic , mysterious and compassionate, and of course with a large dollop of Unas delightful eccentricity, she has finally got around to starting to record her ‘ Poppycock ‘ album which promises to be a treat , Sheila, no romance and Unas song for her mother ” Bridget of Ireland ” are essential cuts delivered in a ” weird folk” style similar to Comus at their best .

One of those figures who’s best work can truly be described as genius , on this album the invisible girls backing was more unobtrusive than on the previous ” disguises in love” giving Johns vocal inflections more space to deliver some of his finest words , ” Beasley Street , evidently chicken town ( proto hip hop! ) and Belladonna are JCC at his finest

A landmark early seventies release was this ambitious and fully realised album by maverick Mancunian Roy Harper , four long for the time tracks embellished by friends David Bedford and Led Zeppelins Jimmy Page with Harper attacking the vocals with feverish zest , he opens with a love song but follows with songs about the barbarity we wreak upon each other , It’s intense powerful stuff infused with great beauty too, a classic.

Something bad happened in the recording or mixing of this album sucking some of the life and effervescence out of the bubbling frothing sound that those of us who watched their popart performances hoped to hear , that said because of how good the material was this was still an exceptional album , they knew their stuff and you get a glorious mash up of Joe Meek meets glam rock with a Georgio Moroder beat at a Hawkwind gig, , contains all the singles which soundtracked Manchester back then with ‘ the Storm ‘ the pick of the bunch.

In 1978 this was an absolutely game changing album , leaving the three chord cult death sac of ‘ punk rock’ Howard Devoto put together this art rock almost prog ensemble and in doing so demonstrated there was a way out of conformity , it was a Great Leap Forward and many owe Magazine a debt of gratitude for leading the way, ‘ motorcade’ and ‘ the light pours out of me’ are songs and performances to treasure for ever.

Monkeys in Love – Will Pet and Cuddle You

Monkeys in love are a joy who it is easy to be smitten with , describing themselves as being like ” a drunk stereolab” sums up their style adequately enough , their subsequent albums have hung together better and they have grown more confident and mature ! But this has the awesome ” riffing on kitten ” and pointed ” man in a keith moon t shirt ” they improve my mood by their very existence.

Tributes to Ian Moss from friends

Moet is a lovely guy – full of ideas, almost a fountain of music and writing gushing from him on almost daily basis. He has been ‘there’ since the beginning and I am sure he will never stop. One of the good guys.

After gigging with Moet for the best part of 40 years, you think I would know him – nope. If unpredictability was a predictable trait, then he would still be unpredictable. He is the embodiment of Schrodingers cat. This element has been brought to the stage since the dawn of the Hamsters. The F Club in Leeds when he pummeled me on stage for NOT making chicken noises, to smashing a fake glass bottle over Nigels head during a Sicknurse gig, is testament to this. The thing that has always remained constant, even through his life threatening cancer scares and heart problems is the energy in his performance. His unique mixture of humour and sometimes, dark vengeance, coupled with a seemingly bottomless pit of general knowledge and experience, has moulded Moet into the creature that now fronts Four Candles. If you’re lucky enough to be invited to his 60th birthday bash, then go, if you’re not invited, then turn up anyway!

Dear friends, I remember, as a child, I was often kept awake by, what I assumed to be, a trapped insect in the street lamp outside my bedroom window. Upon achieving puberty I was given a ladder with which to investigate the unmentionable intimacies of adult life. The first thing I did with my new ladder was to scale that lamppost and attempt to free whatever was trapped beneath the lamp glass. Yes, you guessed it, it turned out the be our very own Ian Moss. Mossy. The Mosstervator. The lord of Moss-rule. Apparently, having discovered a way into and out of the lamp structure, Ian had been enjoying a nightly game of Mothball with the local Lepidoptera. Over the years, Ian had gained their respect as a competent “sputator” – i.e. The player elected to regurgitate fructose based mucus onto the forelegs of the opposing goalkeeper. I am sure we all have similar stories to share. That’s our Ian.

The Gig
Celebrating Ian “Moet” Moss’s 60th Birthday with a music filled gig at The Witchwood in Ashton-u-Lyne on June 25th, The show runs from 2pm and 8pm and features some German Shepherd artists plus a selection of the best bands in the Greater Manchester area at the moment.

It’s a free entry but we would encourage anyone attending to contribute £5 to cover expenses for the participating musicians.

On the line up

Intro by Ged Babey Everything else by Moet & Friends