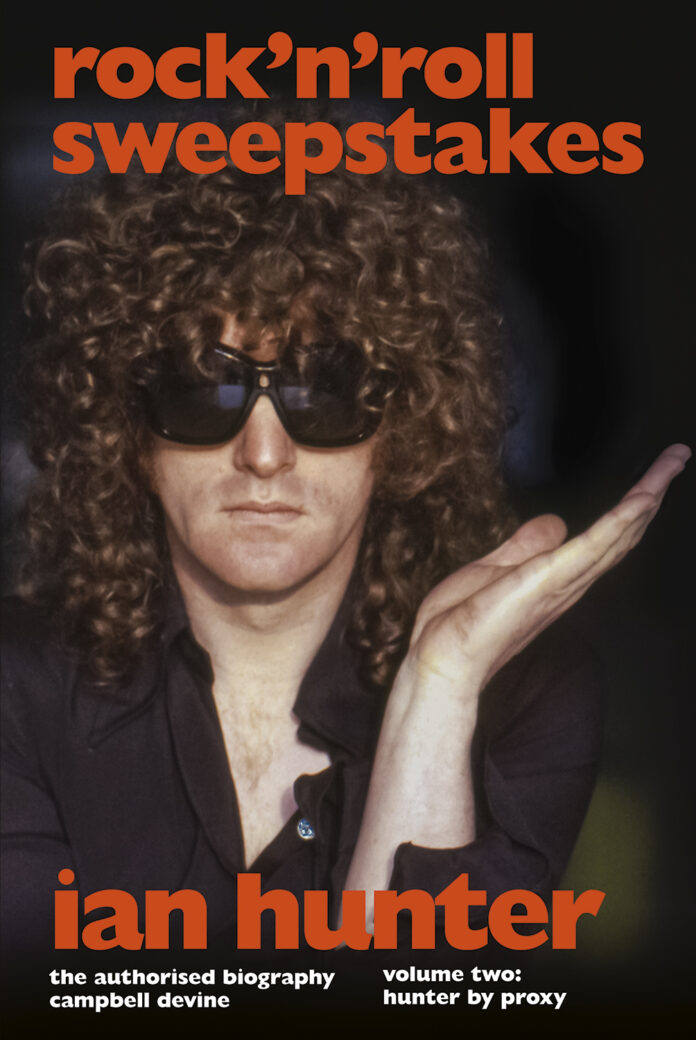 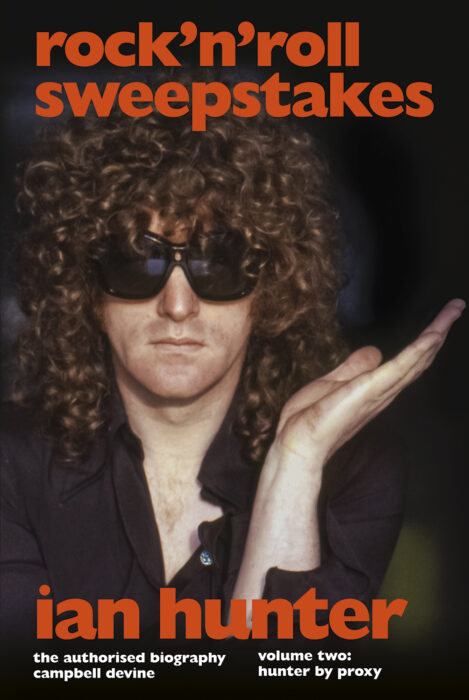 Campbell Devine delivers his second part of the authorised biography of a true rock legend. It’s a must-read for anyone who loves the music of Ian Hunter and Mott The Hoople. Gordon Rutherford rolls away the stone for Louder Than War.

There is no denying Ian Hunter’s place in rock’s great pantheon. This is a man who has shared a stage with Bowie; the guy who stood shoulder to shoulder with the leviathan of the Les Paul, Mick Ronson. He is the voice of All the Young Dudes. Let’s face it, he’s a bonafide legend who is as deserving of a biography as anyone in music history. Fortunately, Campbell Devine is on hand to deliver one.

To be more precise, Devine’s labour of love, Rock ‘n’ Roll Sweepstakes, is actually a tome of two halves. Volume One: Mott’s The Story was published in 2019 and, as you might gather by the title, covered Hunter’s illustrious career as frontman for the mighty Mott The Hoople. The volume I currently hold in my hand (Volume Two, unsurprisingly) is subtitled Hunter By Proxy. That’s the material that’s up for review here. Post-Mott Ian Hunter.

How important is it to have consumed Volume One before leaping into Volume Two? I guess that’s the question that the casual browser will be asking. After all, you wouldn’t watch season two of Killing Eve before watching the first season, would you? (Spoiler alert – you probably shouldn’t bother watching it at all.) Let me reassure you, reading the first volume is not critical to your enjoyment of Volume Two at all. That’s because Devine cleverly brings the reader up to speed in his opening chapter, where he takes one on a whistle-stop tour through Hunter’s birth, formative years and the rise and fall of Mott The Hoople, all in just a few short pages. From there on in, we are dealing primarily with the solo career of Ian Hunter.

I imagine that one of the biggest challenges faced by the publishers with regard to Volume Two of Rock ‘n’ Roll Sweepstakes is the hits. Or, to be precise, the lack of them. Even today, Mott The Hoople remain a big name. They were a band who recorded songs that are recognised and loved worldwide. The aforementioned All The Young Dudes, along with the likes of All The Way From Memphis and Roll Away The Stone are iconic rock anthems and it is easy to imagine anyone with a passing interest in rock music dipping into a biography that deals with the recording of those songs. Whilst this is not a criticism of Ian Hunter’s solo material at all, it is more difficult to imagine anyone who is not a follower of Mott The Hoople or Hunter immersing themselves in Volume Two. It truly is one for the fans.

However, that’s just fine and dandy, because it seems that they are precisely the target audience that Devine has in mind here as he forensically interrogates Hunter’s post-Mott career. Devine is clearly a massive fan of Mott/Hunter and his love for the subject matter oozes out of every line as he meticulously covers every move. He deserves incredible credit for his attention to detail and his ability to describe events with such granularity and flawless prose. Notwithstanding that, Devine does have a fan’s tendency to leave you feeling a little giddy by the sheer expanse of information. Musicians, studios, songs, cities – it’s like being on the waltzers at the funfair. Totally head-spinning.

As well as the fans, this is a work that will also be loved by rock historians. If you are one of those people who used to love poring over Pete Frame’s Rock Family Trees in the NME, you will get a real kick from Devine’s book. Over the years, Hunter has worked with a spectacular and surprising array of collaborators, including Bernard Edwards (yes, that Bernard Edwards), punk icons Glen Matlock and Mick Jones, Ellen Foley, Todd Rundgren, Earl Slick, Velvet Underground’s John Cale and bass legend Jaco Pastorius. With the exception of Pastorius, the respective roles of all of these rock ‘n’ roll heavyweights are somewhat underplayed by Devine. However, that’s understandable. This is Ian Hunter’s story and the spotlight should remain fixed on him, although it does frequently deviate to stage left to pick out the waif-like Mick Ronson. And rightly so.

Returning to Pastorius, his collaboration with Hunter is one of the most interesting chapters in the book. It concerns the making of Hunter’s second solo album, All-American Alien Boy, a project that turned out to be commercial suicide. Bored with conventional rock music, Hunter decided to go down a different path, to break new ground, to push the boundaries. The core band he recruited comprised of Aynsley Dunbar on drums, alto saxophonist David Sanborn, Chris Stainton on keys, Jerry Weems on guitar and Jaco Pastorius on bass. Recorded in only three weeks, the album was themed on Hunter’s first impressions of living in New York. The fusion of soft rock tinged with jazz leanings may not have been embraced by the fans, but this ambitious project was one of his most critically acclaimed works and the love for All-American Alien Boy is clearly shared by Devine who describes it as “one of the most potent and insightful records in Hunter’s catalogue”.

Perhaps this chapter was so captivating because All-American Alien Boy is so different from the rest of Hunter’s back catalogue. Maybe it’s because it happens to be a favourite of Devine’s. It clearly means something special to him and that warmth seeps out in his prose. Either way, this particular chapter has a humanity and a personality that elevates it above many of the book’s other chapters.

The other chapter to deliver in such an emotionally powerful way is the one entitled Michael Picasso. It is the most beautifully written, heartfelt chapter in the entire volume, exuding humanity and compassion and a deep love. Everyone knows what a brilliantly gifted musician Mick Ronson was. However, the most interesting insight I gleaned from Devine’s book was that he was also a really down to earth, genuine, caring guy and this chapter is heartbreaking as it describes his fight with cancer. His bravery and stoicism and determination to keep working and supporting those around him would bring a tear to a glass eye. It’s also evident from the interviews Devine conducts with Hunter that the singer truly loved his friend and primary collaborator. Mick Ronson died at 46 years old. Way too young. And in case you are wondering, Michael Picasso happens to be the title of the song that Hunter wrote for his friend.

Weighing in at more than 500 pages, Rock ‘n’ Roll Sweepstakes: Hunter By Proxy is a significant volume of work. The rock historians and the Mott/Hunter aficionados will love every bit of it as it fastidiously unpicks every recording. For the more casual reader like me, it’s a shame there isn’t more warmth and personal stories like the two chapters discussed above. Notwithstanding that, Devine deserves immense credit for producing a body of work that, taken with volume one of Rock ‘n’ Roll Sweepstakes, will be viewed as the definitive story of one of rock’s great frontmen.