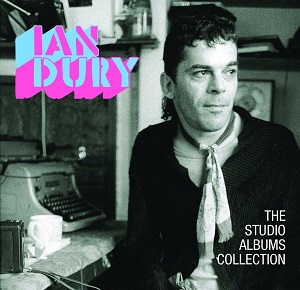 The complete works of the legendary artist are released on one box set. Louder Than War’s Paul Scott-Bates reviews.

Ian Robins Dury was a genius. End of.

Without doubt he was taken from us all too soon. His very unique brand of punk/jazz/disco/funk/poetry was unheard of and to this day no-one has come anywhere close to being mentioned in the same breath as him.

He’ll be known to many as the bloke, with his Blockheads, that brought us Hit Me With Your Rhythm Stick, and quite rightly in some respects. The song is an incredible piece of work, still sounding fresh and made to this day. After waiting patiently behind Village People’s YMCA for two weeks it made number one in January 1979 and sold 979,000 copies, a figure that today would probably see an artist at the top spot for a year. My lasting memory will be watching Top Of The Pops and hearing my Dad say, “I wish somebody WOULD bloody hit him”.

But it wasn’t just Hit Me that propelled him onto our screens, his enigmatic personality performed Reasons To Be Cheerful Pt 3, Spasticus (Autisticus) and What A Waste. His gave us one of today’s commonest everyday phrases in ‘sex and drugs and rock and roll’ and his left behind paintings as the result of another of his impressive talents.

He had the ability to move from serious to comic in the space of a gap between tracks. Often hilarious (There Ain’t Half Been Some Clever Bastards) and often serious (Ban The Bomb) he tugged and pulled at our senses and made us think. He was so far ahead of his time that it’s almost unbelievable. On Yes And No (Paula) from his 1980 album Laughter he came up with the human equivalent of scratching. Ban The Bomb featured rapping back in 1984.

His second love of painting was perhaps the influence behind Peter The Painter, a song about Sergeant Pepper album sleeve designer Peter Blake, and Bus Drivers Prayer is nothing short of genius as he cleverly substitutes lines for London locations on a double decker route.

All eight of Dury’s studio albums are here documenting a terrific output from 1977 through to 1998 two years before his death from metastatic colorectal cancer, and it is a must for any music lover, poet or curiosity seeker.

One word of warning is that Ian often omitted singles releases from albums. The cd version of the box set includes a bonus disc of the fourteen singles, the vinyl does not.

To give this collection anything other than top marks would surely damn me to an eternity in Hell.

An Ian Dury tribute website can be found here.