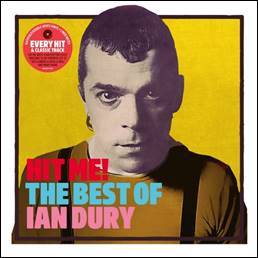 Hit Me! The Best Of Ian Dury

Ian Dury’s greatest moments remembered in a three-hour three-CD compilation capturing all the finest moments of his career, from the Kilburns through to the Blockheads.

As national treasures go, Ian Dury was one of the unlikeliest. A cantankerous cripple with a penchant for pills and puns, he was a living breathing saucy seaside postcard, a master of the double or even triple entendre; a Cockney caricature with cleverly constructed couplets coming out of his Aris.

A Victorian music hall entertainer born a century too late, he shot his way into our our hearts at the birth of punk. He shone like the brightest star – and, for a glorious 18 months between 1978 and 1979 soared all the way to the top of the charts. And then, in the manner prescribed by Neil Young, burned out before he could fade away.

This new compilation reminds us what we lost when he died 20 years ago – and what we had during the quarter of a century that he was making records and performing. It’s so much more than I remember; so much more than you might imagine you do too. Ian Dury left a wealth of music and a wealth of words and the best of them are all here, preserved for posterity on three CDs and three and a quarter hours of mostly essential music. Which is at least three hours more than many musicians manage in a career.

Thankfully, whoever compiled this collection has not tried to be “fair” by giving proportional representation to the less memorable periods of Dury’s career, of which there were several, not least when he was simultaneously battling alcoholism, depression and an addiction to sleeping pills as he battled the lifelong pain of his disability – problems that made him difficult to work with, as well as affecting his creativity, and his passion for his work.

By popular consent – and his own judgment – Dury’s best two albums were his first and last – that remarkable 1977 debut, New Boots And Panties!! and that poignant swansong, Mr Love Pants in 1997 – and accordingly they make up the bulk of this Best Of compilation, which aims not to unearth unreleased oddities and rarities but simply to do what it says on the tin and collect the very best songs in one place.

Selections from the second and third albums, Do It Yourself and Laughter, are judiciously chosen to separate the wheat from the considerable pile of chaff; the ill-advised excursion to Jamaica to record Lord Upminster with Sly & Robbie is wisely ignored altogether, and selections from those subsequent solo albums are picked with care and precision. There’s also a carefully chosen selection from his days with Kilburn & The High Roads, including a demo of their signature song England’s Glory (later released on Stiff by music hall legend Max Wall) to bring the whole thing to a close.

Hats off to the curator!

The singles, of course, are all there – that triple-whammy of What A Waste with its litany of lost opportunities and broken dreams recited over the funkiest of backings; the chart-topping Hit Me With Your Rhythm Stick; and the proto-rap of Reasons To Be Cheerful (Part 3) – gathered together at the start of Disc 2, along with the lesser hit I Want To Be Straight.

How great they were! And how weirdly one-of-a-kind was that debut single on Stiff that became not only a standard but a reference point, a figure of speech that we all still use today to conjure up a debauched lifestyle – Sex & Drugs & Rock & Roll. It was a song that didn’t fit any of the labels of music at the time.

Thanks to the credentials of that Stiff connection, which somehow bestowed punk credibility on hairy old rockers like Lemmy, Larry Wallis and Sean Tyla – and the subsequent Live Stiffs tour, where Dury appeared alongside Elvis Costello, Nick Lowe, Larry Wallis and Wreckless Eric (Dury performed as his drummer) – he was subsumed into the punk family and went on to become one of its most prominent faces.

Musically, he might not have much in common with the Class of ’77. But it was Dury, at 35 literally more than twice the age of some of those contemporaries, who pioneered the razor-blade earrings and safety-pins on the lapels of second-hand suit jackets before Johnny Rotten adopted image (fun fact: Malcolm McLaren was a close friend of Dury’s manager), and Dury made energy, brevity and spontaneity, those hallmarks of punk, watchwords of greater importance than slick musical proficiency.

Conversely, if there’s anything new to take away from these old favourites, it’s a reminder of just what a brilliant band the Blockheads were. Few rhythm sections come tighter or funkier than the unit of Mickey Gallagher and Norman Watt-Roy, whose bass playing stands comparison to Larry Graham and Bootsy Collins with its sinuous, rubbery quality.

At the same time, Chaz Jankel’s versatility on a range of keyboards and styles, from delicate jazz piano to funky synth runs and all points in between, allied to guitarist John Turbull and sax player Davey Payne’s ability to decorate a song with a short but sweet solo on their respective instruments, meant they could tackle almost any style with the same skill and enthusiasm.

At their best, creating a steamy storm of funk on songs like Jack Shit George, Bed O’Roses, What A Waste, or the smooth jazz-funk of Inbetweenies and that tender-but-funny ode to morning wood, Wake Up And Make Love With Me, there’s no band that can touch them.

Disc one begins with that debut single – where else! – and includes most of that landmark 1977 debut album New Boots And Panties!! with the second half of the disc devoted to the Kilburns, whose anarchic approach had parallels with punk in its DIY ethos, if not its musical direction. Their loose approach is a contrast to the proficiency of the Blockheads, whose versatility meant they could venture out of their default jazz-funk style, even dipping their toes in the tropical waters of reggae (Mash It Up Harry and the tender Lullaby For Franci/es) though Dury’s cod-Jamaican accent does its best to dent the attraction of You’re More Than Fair.

Disc two is more of a funkfest. It kicks off with those four hit singles all in a row, making it slightly top-loaded, but who’s complaining about that? And let’s just remind ourselves that Dury wasn’t kidding when he claimed, with plenty of justification, that Reasons To Be Cheerful was the first rap single – justified because it came out two months before the accepted starting point of rap, Sugarhill Gang’s Rapper’s Delight. And who can forget that wonderful sax solo that comes out of nowhere – improvised by Davey Payne, at Dury’s instigation, in order to guarantee him a songwriting royalty.

Disc three is something of a hotch potch, ranging from the cod-reggae of Mash It Up Harry to the fractured funk of his anti-charity-single Spasticus Autisticus, which almost sounds No Wave in its dissonant fury, and the string-drenched mis-steps of Sueperman’s Big Sister and Fucking Ada, where new guitarist Wilko Johnson’s choppy licks are drowned in the mix.

But for each small disappointment there’s a forgotten gem, like Sueperman’s oh-so-poignant B-side You’ll See Glimpses, with Dury singing from the heart: “All I want for my birthday is another birthday.” Which is just devastating. In fact, that’s the other takeaway from this collection: for all his comedic wordplay and foul-mouthed banter (the intro of Plaistow Patricia remains the rudest of all time, surely), when Dury opened his heart, as on You’ll See Glimpses, or Pam’s Moods, or the poignant Lullaby For Franci/es, or the heartbreakingly honest tribute to his father My Old Man – and even the cod-Oirish ballad O’Donegal – he could bring tears to your eyes.

But we’ll always remember him best for those naughty rhymes that make us laugh with his songs about Geraldine, the girl in the sandwich centre (“I’m enamoured of the magic of her fresh polenta”), about Plaistow Patricia (“She liked it best when she went Up West”), Clevor Trever (“Knock me down with a feather”) and, most of all, for Billericay Dickie, the Don Juan of the Essex Riviera.

“Had a love affair with nina / In the back of my Cortina / A seasoned-up hyena / Could not have been more obscener / She took me to the cleaners / And other misdemeanours / But I got right up between ‘er / Rum and ‘er Ribena.”