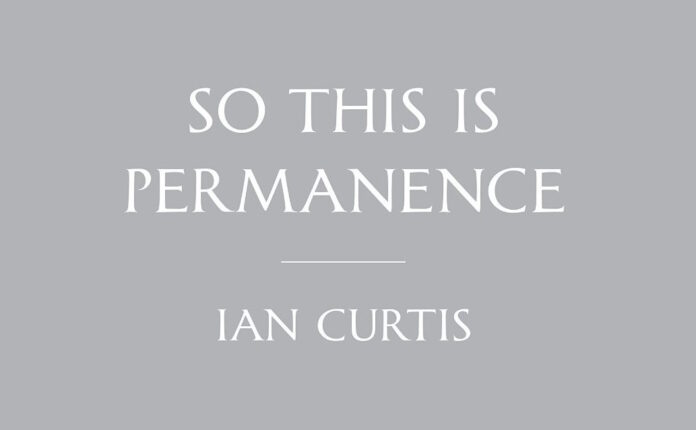 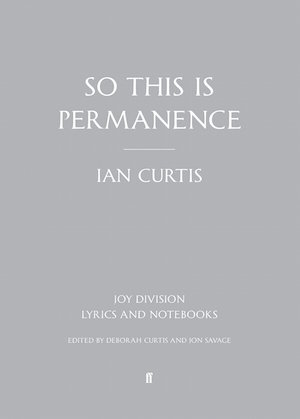 Ian Curtis: So This is Permanence (Faber & Faber)

There’s a whole host of literature available on Joy Division and their Manchester contemporaries. Is this new addition to the library worth while? Louder Than War’s Simon Tucker answers with a resounding yes.

“Here are the young men, the weight on their shoulders”

Let me say this from the off, This Is Permanence is quite possibly the most important book to be released about Joy Division.  It’s the closet we will ever get to the true inner thoughts of its author. With this book we get to see the human behind the myth. We see his craft being honed and developing over the brief four year period that they were active. And whilst people will still be drawn to the book hoping for it to be a Kurt Cobain Journals type of read, what we really get is a focus back on what made Curtis’s lyrics (and Joy Division’s music) so powerful and why they still connect with people thirty-plus years after his tragic death.

The book opens with a foreword by Ian’s widow Deborah (whose Touching From A Distance remains a beautifully honest account of her life with Ian and a benchmark in myth debunking autobiography) who gives a brief overview of her relationship with Ian and her reasons behind releasing these writings. She explains how his writings “became an extension of his body” and how he was very private and protective of them.

The main introduction is written by Jon Savage who helps place the writings in chronological order and gives some extra background to events that were occurring to Curtis during their creation. He also, like Deborah, helps bring the readers focus to what the release of the book hopes to achieve. Savage tells us about Ian’s voracious reading habits and his penchant for dystopian sci-fi with authors like Ballard and Burroughs being particularly influential.

Reading This Is Permanence it is obvious that the main influence of Curtis’ lyrics was human suffering whether that be from the victims or perpetrators point of view. In his early writings, when he refers to “I” or “we” Curtis is placing himself into the narrative more as an actor or storyteller yet as his well documented personal issues begin to take hold, we see the “I” and “we” become literal building up towards the final album Closer and singles such as Atmosphere and Love Will Tear Us Apart.

Of course, many of these lyrics have been published before in Touching From A Distance and the Heart and Soul box set and they are certainly worth revisiting it is, however, This Is Permanence’s appendices that are the true revelations. In them we get to see lyrics in their alternative and early forms plus prose, artwork, fanzines, letters, and books that Ian was drawn to. It is in this section where we truly get to see Curtis’ work ethic. Lyrics are altered, titles are swapped (for example Shadowplay is originally entitled Interzone) and we see a writer who is obviously conflicted about revealing his true feelings. This is none more explicit than in his reworking of Love Will Tear Us Apart which sees him alternating from first person to observer, from “this” to “your”.

This Is Permanence is a remarkable read. It is a book that is the work of an author that grafted tirelessly at his craft, someone who absorbed literature, cinema and pop culture and turned it inwards. A soul that got swallowed up by illness, pressure, and a torn heart. It was this work ethic that created powerful poetry put to the driving force of a post-punk background. It shows a man who cared deeply about his art.

It is a book that every aspiring author, poet, or songwriter should read and get inspired by.