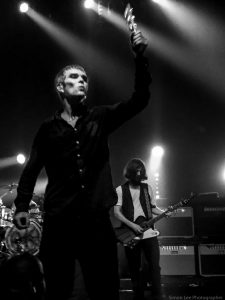 Ian Brown has wasted no time in returning to his creative ways after being spotted at Liverpool’s Parr St studios.  With no concrete news of what he is up to it seems like the (former) Stone Roses frontman is working on a solo album that has been much mooted in the past couple of years after the Stone Roses hit a cul de sac in their creative flow after releasing those two singles.