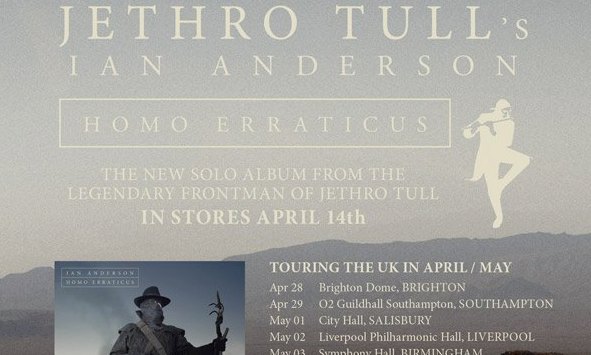 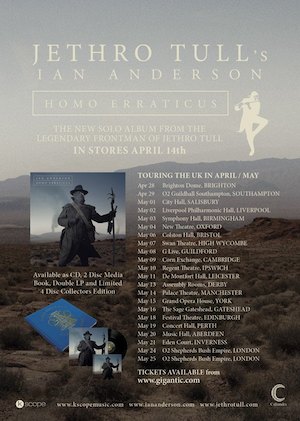 Jethro Tull – 17th Century agriculturalist and inventor of the patent seed drill. Ian Anderson – singer, acoustic guitarist, flute player and leading light of  the rock band who share the same name – definitely not one and the same. Anderson’s new album is out and his new show comes with a full multimedia feast – Manchester is the latest stop.

What’s in a name? After over forty years as  frontman of blues/folk/hard/prog (insert your own genre) rockers Jethro Tull, Ian Anderson has recently stepped out from Tull to appear under his own name. As not only Tull’s front man, he’s been at pains to point out in interviews how he’s also been the writer, arranger, producer and most things under the sun when it comes to it. So it’s understandable that he holds some claim to the brand that is Jethro Tull.

However, it’s as Ian Anderson (or, as the sticker on the slip case of the album states, ‘Jethro Tull’s Ian Anderson’) that he released the ‘Thick As A Brick 2’ in 2011 as a follow up to the 1972 Tull original and the current ‘Homo Erraticus’ album. A song cycle which makes a chronological attempt to record a musical narrative through the guise of the travelling man and his journey through the development of civilisation in Britain and into the future – penned again by Anderson’s alter ego/collaborator with the nom de plume of Gerald Bostock.

It was a full performance of the ‘Homo Erraticus’ album which took up the first half of the show. Accompanied by actor/singer Ryan O’Donnell who took a lead role in sharing vocals with Ian throughout the show and the musicians who have been his most recent band – Florian Ophale on guitar, John O’Hara sporting a mad professor look on keyboards, David Goodier on bass and drummer Scott Hammond, it was a full return to the type of production values which carry the ‘rock theatre’ tag. Not quite musical theatre, but with the band members taking narrative roles both live and on screen to link the songs and with a constant feed on the video backdrop, the audio visual presentation of the whole album gave the show as strong an enactment as you could get from an hour of uninterrupted music.

From the opening ‘Doggerlands’ and Neolithic man of 7000BC through Jesus as ‘wild child’, the highwayman’s turnpike as a super highway and the grammar school system (a favourite topic of Anderson/Bostock) the skilfully worded epic unravelled until the optimism of the closing ‘Cold Dead Reckoning’.  And that was ‘Homo Erraticus’. With the promise of the best of Jethro Tull still to come, it was an impressive Act One.

Act Two was pretty much business as usual for the ‘Homo Erraticus’ band . With the exception of the exceptional Martin Barre, Tull has always been pretty much a band of interchangeable musicians – the revolving door policy revolving around him and naturally Ian Anderson. In some eyes, Anderson’s current band might just be the most recent incarnation, in all but name, of Jethro Tull. But, as someone once said, the song(s) remain the same, so perming an hour and a bit of classic Tull songs was a relatively straightforward task.

The usual chestnuts were there of course, maybe not even warranting a  mention of  the song titles – think of Jethro Tull, you think of ‘Aqualung’, ‘Living In The Past’, ‘Locomotive Breath’ and Anderson’s flute playing, notably in ‘Bouree’. There were a couple of most pleasant surprises amongst the predominantly 70s selection, with only ‘Farm On The Freeway’ breaking the barrier into the 80s. Ryan O’Donnell’s choice of ‘Teacher’ was most welcome and accompanied by visuals of Anderson going through his routine performing the song in his earlier wilder days on the video screen.  There was also the much appreciated willingness of Anderson to acquiesce to fan opinion and deliver ‘Critique Oblique’ – a short extract from 1973’s ‘Passion Play’ album, much maligned by the critics yet held in high reverence by the discerning fans and which has been notable by its absence from live performances – until now.

In the long run, some might question how well Ian Anderson’s latest outing sits with long term Tull fans -maybe they’re just grateful that the musical genius that is Ian Anderson is still writing and evolving. It would be a little clichéd to quote the old Tull song title, too old to rock and roll (cue the eyes rolling) but for a musician in his mid sixties to be out and touring extensively with a splendid new album, why not make hay while the sun shines?

Still touring until the end of May, details at Jethro Tull.com and Facebook.

All words by Michael Ainscoe, find his Louder Than War archive here.