Experimental electro artist IAMX, has re-emerged with a new single ‘North Star’ taken from his sixth studio album ‘Metanoia’ and he has graced the UK with just four special live performances. Chris Corner known as IAMX came to Manchester and Vanessa Lourenco (words) and Melanie Smith (photos) checked in on the show and battled with hardcore fans for a spot at the front.

Corner is what you would call a one of a kind artist, English born but now based in L.A, he is a composer/producer/multi-instrumentionalist/vocalist and art performer. Their music is dark, sombre and with one purpose, to awake the beast within. He has no boundaries when it comes to exploring human nature – the duality between good and evil, light and dark, the sexuality within. 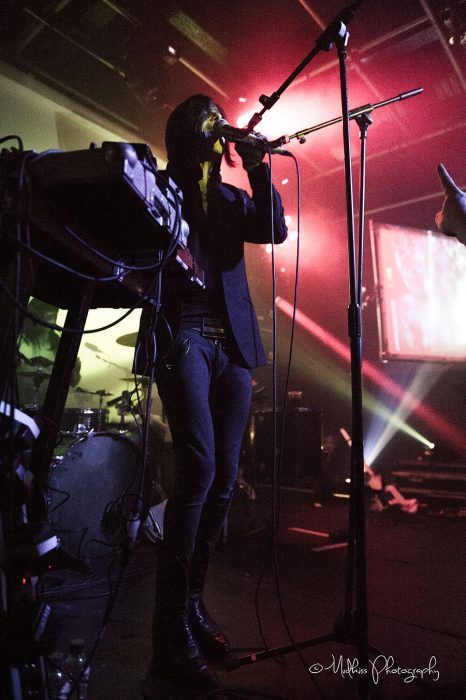 The venue is filled with a multitude of fans that have been “camping” outside since 10am, two of their loyal fans came expressly from Germany just to see him and queued early to get a front position. There are no support acts for IAMX, so its straight into the show. Whilst the stage crew are setting up, there are a lot of overexcited people squashed down at the front dressed in glitter and sparkles, that sporadically shout his name out loud, and touch all the reachable objects on stage. It’s like they linger for him so bad they must be in touch with something he has already touched.

Then, all the lights go out, pitch-black and an ultraviolet light lead the band members to their designated spots. There is Jon Siren, the long haired drummer, bare naked from the waist up, two females on keyboards/ backing vocals who are Sammi Doll (who has her own fan club here) and Janine Gezang dressed in black lace bodysuits that clash against their pale skin and black tinted lips. Chris enters stage right and the screams and shouts from the eager crowd are felt with every single vibration in the room. There’s a jolt of energy roaring through the walls – they want him and now they got him!

For someone who knows the band and follow them on social media, you know what to expect. However, if this is your first time witnessing IAMX live,  (like me) you are in for a treat, a sensorial one. Chris is known for his highly visuals verging on psychedelic live performances, so there are three big screens on stage in which numerous complementary images keep spawning upon – pieces of his videos, photos he has collected over the years with a strong rule of black and white and with the intend to awake the watcher to a booklet of diverse emotions.

There is a lot of movement on stage, Chris has a ferocious voice that echoes through the three microphones he uses, at least two at the same time, and he moves from one end of the stage to the other like a panther. He leans over the fans who take full advantage of this by touching him and grabbing him, running their fingers through his body and he is a master of tease, he knows exactly when to make his swift exit to another part of the stage inciting other fans. 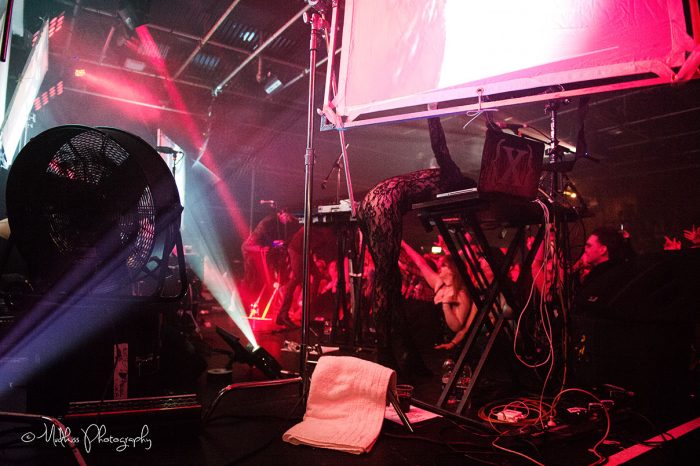 The girls exude a strong sense of femininity, they know they are here to complement Chris, however it is almost as if they are the ones commanding the show, inciting the fans to jump, clap, sing, energising them with each loud bang from the drum kit.

This is the sixth album Chris Corner has released under the name of IAMX and he explains that “IAMX is basically my public therapy. It’s also an excuse for me to play with who I am, to explore certain parts of my personality, that I don’t get to explore in everyday life.” And you can feel this on his performances, there is an animal magnetism about him and the people whom he reaches out to, his fans, listeners, followers, disciples, feel this vibe of energy that he emanates and it’s almost as if he seduces them with every word, every breathe,and every gesture. It certainly was a special show, which you can see part of in this video from the night by WooseTheBassist.