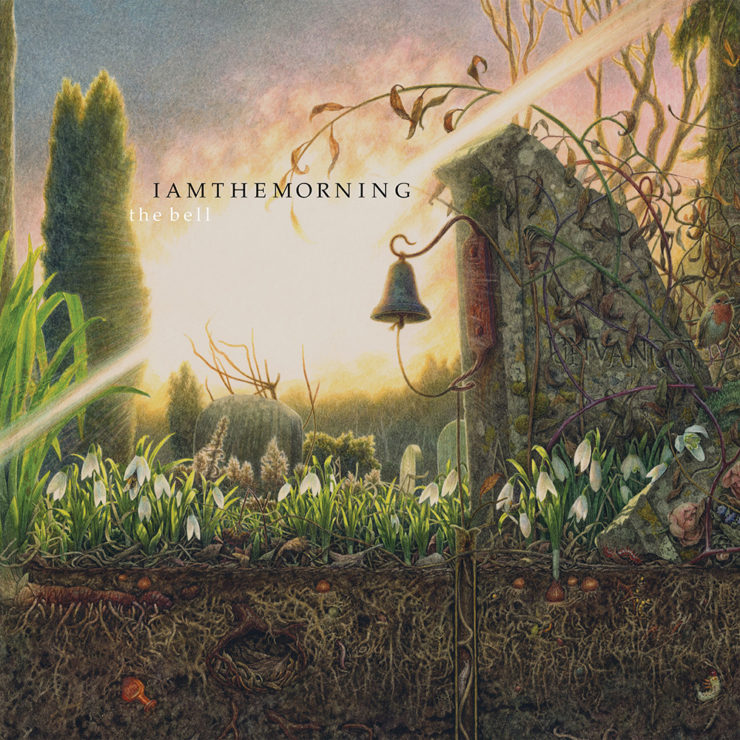 The chamber prog duo from Russia enhances their growing and glowing reputation with another set that explores the darker side via their unique genre-spanning combination of classical, folk and rock.

Making use of the idea of 19th Century song cycles, ten individual stories are linked by the theme of human cruelty and the pain caused by it. A visual hint comes from the cover art that shows the bell of a safety coffin, born from the 19th Century morbid fear of being buried alive. Those who are familiar with iamthemorning need no forewarning that The Bell is going to take them on the darkest of delicately framed gothic journeys.

Split into two parts, singer Marjana Semkina has talked of the album being “a journey taking us inside the mind of a person suffering from abuse or neglect or open hostility of society or a specific person.” It may have roots in Victorian England but it proves a  fascinating musical exploration of the notion of cruelty and is significantly telling that she considers that even in modern times, “humankind is still in its infancy in terms of emotional maturity.”

Guided by the virtuoso piano flair of Gleb Kolyadin, the haunting quality that comes as standard with iamthemorning, gets seriously ramped up. Marjana has earned enough recognition now for people to put a hold on the Kate Bush comparisons and while there are pockets of acoustic guitar and diligent percussion, they never overwhelm the precision of the arrangements.

Where Freak Show is a curtain-raiser that weaves in and out of an impressive instrumental arrangement that verges on heavy and avant-garde with a wandering lead clarinet or possibly sax, you may find yourself holding your breath in anticipation of missing something in a most delicate Black And Blue. The relative serenity of Part 1 is lifted by the sweeping arrangement on Six Feet.

Switching to Part 2, Song Of Psyche shows the softer musical side of the album. However, with a lyric that speaks of “You make a step into hell…this adventure won’t end well” you’re never too far away from the theme of despondency and anguish. It’s a story of a beautiful mortal woman, who had to go all the way to Hell to earn her place next to her lover Cupid and acts as a prelude to Gleb who’s allowed some freedom to indulge and let rip on Lilies.

As the otherworldy nature of the record continues its passage, the instrumental coda to Salute sees an Oldfield styled guitar figure played over Gleb’s piano lines. An uplifting moment and reminder that despite the overwhelmingly macabre tone, the feeling that there’s still hope, that you can still call for help, offers some salvation.  A long shot maybe at the vague prospect of some light in the darkness maybe but you’ll find much shorter odds that there’s than a hint of a masterwork about The Bell.

Watch the video for Song Of Psyche here: