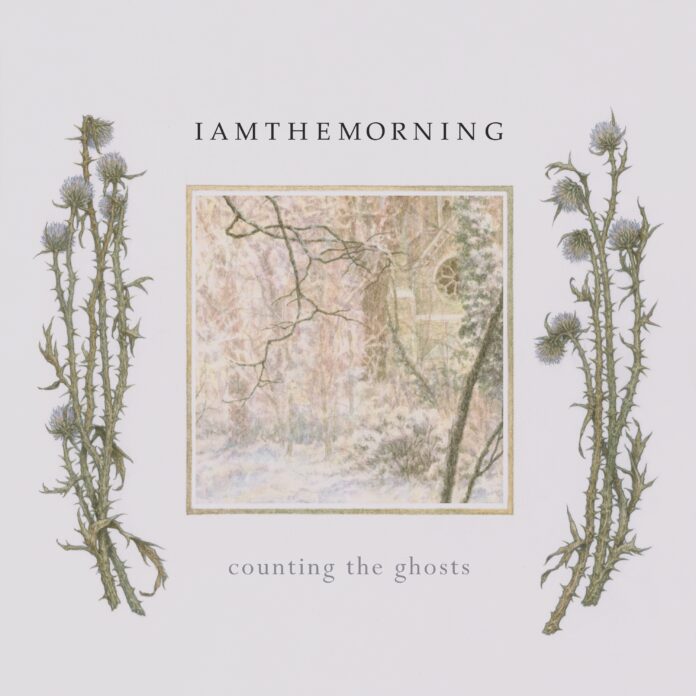 Speaking about the difference compared to their previous release, The Bell, and the upcoming Counting The Ghosts, Gleb Kolyadin stresses:

“We didn’t have an idea of making something extensive, this time”.

Listening to the co-founder of Iamthemorning, I found myself thinking that their latest album, Counting The Ghosts, is something recalling a chamber interlude between two massive parts of an opera. So far, there is no intermission. People are listening to the lullaby-type of singing by Marjana Semkina and Gleb Kolyadin accompanying her. It’s just a moment. But, at the same time, Iamthemorning give you a chance to feel it, really, not just to pass. But if you stop time, you find yourself in this beauty of the ticking clocks.

Despite the fact that Counting The Ghosts was recorded due to lockdown, it’s a very intimate work in which different musicians from different parts of the world found their comfort zones – mentally near each other. In doing so, they created a crystal atmosphere of an incredible size.

“The idea itself rose very spontaneously. At the end of October. We did everything literally in a three weeks”. Kolyadin puts his stress on the fact that, for Iamthemorning, Counting The Ghosts also became the first release, where all their interaction was limited. “All through our previous albums the process of studio-recording took much more time than “homework”, he says.

It seems that for the band it became not much of an experiment, but rather they tried to express their momentary state as atmospheric as anesthetic euphoria.

“I think [these feelings] were dictated by the process of work and our abilities. When you do record the instruments in a good studio you mainly deal with the realistic fixation of the sounds. If you managed to do it correctly, then an instrument would sound beautifully on it’s own.”

Gleb speaks about home-types-of-recordings as something that definitely goes with certain compromises. He states that: “Sometimes it leads to your searching of something new and experimenting. Those are basically the moments when you’re about to fix all the mistakes making it sound beautifuly.”

Following the words of co-founder of Iamthemorning, some of the parts of Counting The Ghosts could be re-worked within their next LP. In a sense, the record became a certain transitional phase for the band. After they started independently, Iamthemorning quickly got signed to Kscope.

“We’ve put out three records [with Kscope].” says Gleb. I’m wondering how different the state of things for the band, that stated independently and got back to this point again. “We’re thinking what we’re gonna do now. Should we put out the next LP fully by ourselves or get back to working with a label. I’d say that this EP is a certain “test-drive” for us…”.

It was a different of course, when they started. All through the years, Iamthemorning were unafraid to experiment within the form of their performance, within the recording process and with number of people involved.

“Sometimes it feels to me that we’re somewhere in between styles. Somewhere between rock-music and neo-classics, folk and academic music…” – folllowing his words. Gleb then explains: “We’re not a very typical example of a band. All through the years we used to exist only as a duo, inviting different people to join us.”

There were moments when they got into exploring the heavy electricity of an orchestral sound before returning to the chamber atmosphere of a string orchestra. Kolyadin compares it to telling a story. A bit unusual but makes a lot of sense. He states, “I can’t stand being the same. It’s like if you’d tell the same story to your friends. Each day. The stories should be different since the days themselves are different. The expression of your thoughts and presentation should be different…” – it makes sense.

I ask Gleb about the unity of these elements. What’s the process like for him, whether there is certain constant involved in different proportions with a different energies each time with each release.

“I visualize the tracks, transform them into a physical form that defines the balance in a final result or the absence of something.” It’s a cocept that he himself finds hard to express, telling me about the place of visualization in his work.

“It’s strange, but for me, each track is a certain architectural composition. It may be compared with a certain building. There’s always a building for each song. Just like for music, there’s a certain shape for all the images. Sometimes it’s different. When you have no idea and start with building of a certain form. Just like it was within Cradle Song. Initially it was my sketch. For one of the theatrical plays I’ve been working on without a concept even though it’s already had a certain form and a structure in its own. But as soon as Marjana added her vocal parts to the track, it became alive.”

Counting The Ghosts is released on 4th of December 2020. You can pre-order the record at Bandcamp.