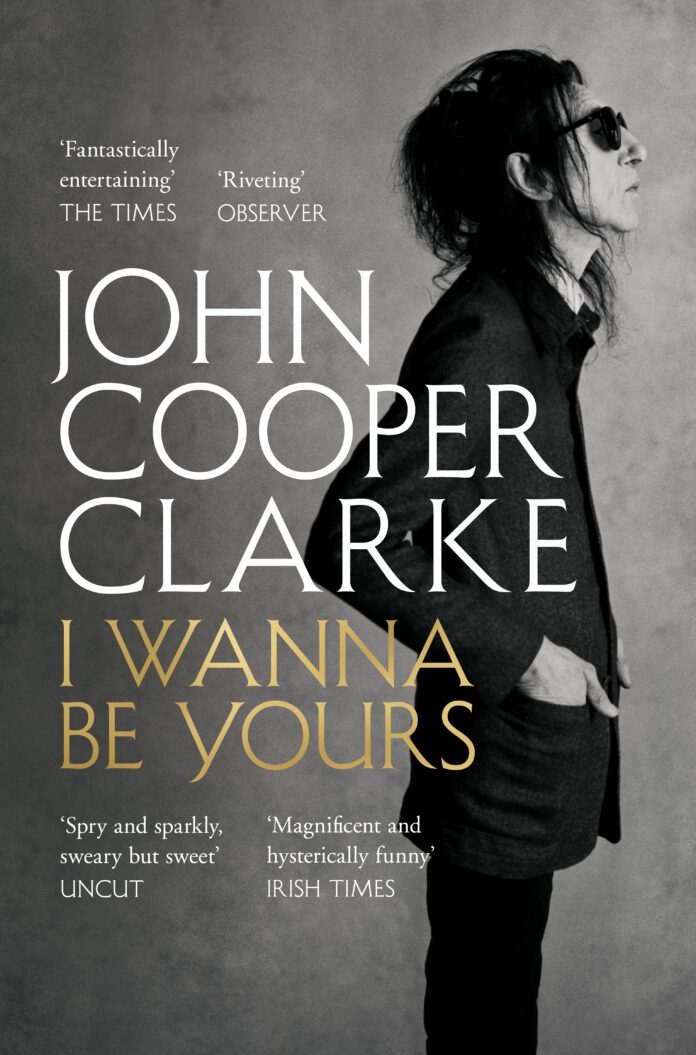 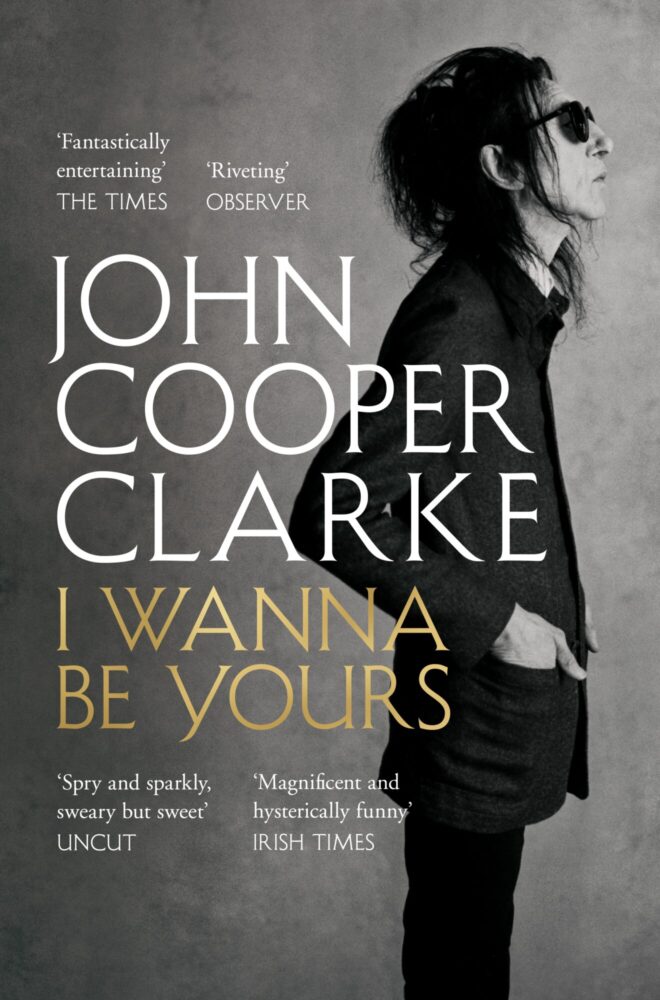 I Wanna Be Yours by John Cooper Clarke

This memoir is everything you would expect from a wordsmith and a poet and more.

Truth truly is often stranger than fiction and the stories of his trajectory from punk performance poet to national treasure are fascinating, compelling and occasionally terrifying. This is one of the most upbeat and optimistic books you will read this year. The choice of title, I Wanna Be Yours speaks to me of love, acceptance and inspiration. Reading his story has filled in some of the gaps, solved some of the mysteries and answered some of my questions as I found, lost and then rediscovered him over the years.

Those who are familiar with his work and the ups and downs of his career will be aware that aspects of his story takes us to dark places, but there is definitely light at the end of the tunnel, and it isn’t the headlights of an oncoming train. His style of writing is all about observing life and he has brought that acute observation to his own story. I too grew up in Salford, just a few years behind Cooper Clarke. I realise now that I saw some of his earliest performances, though I missed the significant one at Bernard Manning’s Embassy Club, the one that convinced him he could stand up in front of any audience as long as their reaction to him wasn’t one of indifference. I knew he worked at Salford Technical College. My boyfriend was a roadie, working for Factory and Alan Wise, and we thought it was a great idea to have a support act that involved minimum set up. Just a poet, a microphone and a notebook. I hadn’t appreciated that he’d had TB as a young teenager. Already introspective, isolation and convalescence made him more of a loner.

The first part of the book could stand alone as a memoir of a Salford childhood in the fifties and sixties. It’s a coming of age story shared by many of us growing up in Manchester and Salford, and there’s so much I recognise and relate to. It stands as a social and local history as much as a personal one. That John Cooper Clarke is now known as the Bard of Salford is significant too. He gave the city a voice and an identity beyond being synonymous with slums, in spite of Beasley Street. That voice is his distinctive voice, that unmistakable delivery that no-one else can match. Poems we learnt at school in my day were recited with a posh accent. It just doesn’t work with Cooper Clarke’s poems. Manchester and Salford had merged with the creation of the Greater Manchester County and if you are from Salford it is often simpler to describe yourself as Mancunian, but they were once very different places and John Cooper Clarke identified and celebrated that.

In the early eighties our paths still crossed occasionally. The Invisible Girls, his band, included old friends and my next door neighbour. Then life took me away from Manchester and I lost touch with Cooper Clarke and his career to the point where I wasn’t even sure if he was still with us in those pre-internet days. I’d heard rumours. Eventually, I discovered James Young’s book about Nico, Songs They Never Play On The Radio and that provided some insight into Cooper Clarke’s fate and difficulties.
He doesn’t shy away from discussing the drugs, the attractions of addiction and the complications of his relationships, but he doesn’t dwell on them. With his wit, powers of observation and way with words he describes some of those experiences in an insightful and even entertaining way. You can only be relieved and happy that he has lived to tell the tale.

Occasionally there are flashes of stand up material in his descriptions and his voice kicks in, reminding you that this was his reality. This is not a work of fiction. The cast of characters grows through the eighties and nineties, with collaborations and support from Music Force, Alan Wise, Rabid Records, Elvis Costello, Richard Hell, Mark E Smith and The Fall, Slim Gaillard, New Order and Joe Strummer to name a few of his connections. Touring took him far and wide, and across the world, with associated difficulties around the procurement of essential supplies. There’s something surreal about the way his career was rescued by a Sugar Puffs advert. It could even be described as poetic, part of the legend. His inclusion on the English GCSE syllabus also spread the word, as he embarked on school tours up and down the country. As well as his fascination with words and pharmaceuticals, he also reminds us just how strong his passion for fashion is. He is a dandy with an image as distinctive as his accent.

Back in the seventies he was part of a new wave of performance poets and stand up comedians. He has been a source of inspiration for at least two generations. If he hadn’t been on the syllabus, we might not have had the Arctic Monkeys. He is now a family man with a successful career as a poet and comedian, with appearances on quiz and chat shows, a commission from the National Trust and an honorary doctorate from Salford University.

The book ends with him about to appear at the London Palladium. His life is a triumph. His career moves onwards and upwards. His audiences span all demographics. ‘Looking back on it now, I can see that although I like to think I’ve led a charmed life, I never took the safe route. I always thought it might not be good right now, but it’s going to pay off later; this gets me that. And every time, I’ve been proven right in the fullness of time.’ Looking to the future he observes, ‘Poetry is not something you have to retire from.’ That’s great news.

You can find I Wanna Be Yours – just released in paperback on Amazon.