Home Music Bands I Swear I Was There: Sex Pistols, Manchester and the Gig That... 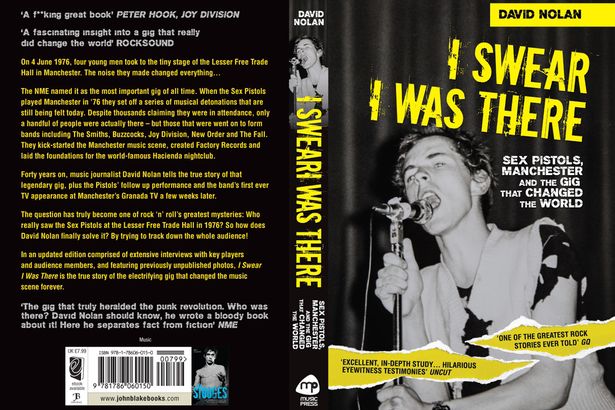 I Swear I Was There: Sex Pistols, Manchester and the Gig That Changed the World

The Greatest Story Ever Told? From the genesis of punk to the revelations of who was, and who wasn’t there.  David Nolans book is the definitive account of the gig(s) that changed a city forever. Ged Babey wasn’t there….

Philip Hoare, the renowned author once said to me:

“With regards to research, into the history of anything, the single most unreliable thing is the human memory”

I was compiling a history of the local punk scene myself at the time and another interviewee, the late John Weafer said much the same, only using completely different words.

“Some people paint things much blacker than they were  and others have a far more rose-tinted view of things with hindsight, so  the truth lies somewhere in between the two”

David Nolan knows this. He went to the records held in the Manchester City Council archives and discovered that £14 was the income generated from the first Sex Pistols gig at the Lesser Free Trade Hall on 4th June 1976 ( or 1076 as it was misprinted on the tickets). So, the admittance being 50 pence, that’s 28 people.

There are literally thousands who swear blind they were there.  Was Mick Hucknell one of them?  Did Buzzcocks support the Pistols?  Who were Solstice? (You’ll have to buy the book to find out.)

It’s all here – the truth, the myth, the half-truths mis-remembered, the chinese-whispers, the mundane facts and the urban myths exploded.  It looks at the thing from every conceivable angle –  from the inside out and the outside in. From eye witnesses to innocent bystanders who thought it was all rubbish.  Every single person who was there gets to have their say. It is the most democratic, all-encompassing account of not just the first but the two Pistols in Manchester gigs, and the TV appearance on So It Goes and the aftermath – as told to Nolan by band members, audience particpants, future legends and never-has-beens.

Eye-witness testimony is slotted next to objective hindsight and still it’s a hell of a read. It’s a story within a story of one mans obsession with the story itself.  To get rid of his obsession Nolan, who was, like myself 12 in 1976, took his son, then aged 12 to see the reformed Pistols at Crystal Palace in 2002.

The Mancunian humour, and at times, bitchiness are what carry the narrative which Nolan creates by brilliantly ordering  and positioning selected quotations from opposing viewpoints.  The rivalry between Buzzcocks and Slaughter and the Dogs for example. John Maher winning the day with the inclusion of a single word on the poster for the second gig.  “Sex Pistols with Slaughter & the Dogs” it read. “but Buzzcocks”.

The total honesty of many of the people interviewed is what makes this book very diferent to any similar account of the era from a London perspective.  Paul Morley, Anthony Wilson and the like have grand statements to make, but these are cut down to size and shown up by the frank admissions of lesser-documented heroes like John the Postman and Ian Moss.

I could ramble on at inordinate length about what a great piece of history, prose, research, anecdote and myth this book is.  It should be on the syllabus for any one studying music and popular culture. The lesson being that this kind of thing, in our tech-obsessed, media-over-saturated, nothing-means-anything-anymore times, will never happen again.

I wish I’d been there.