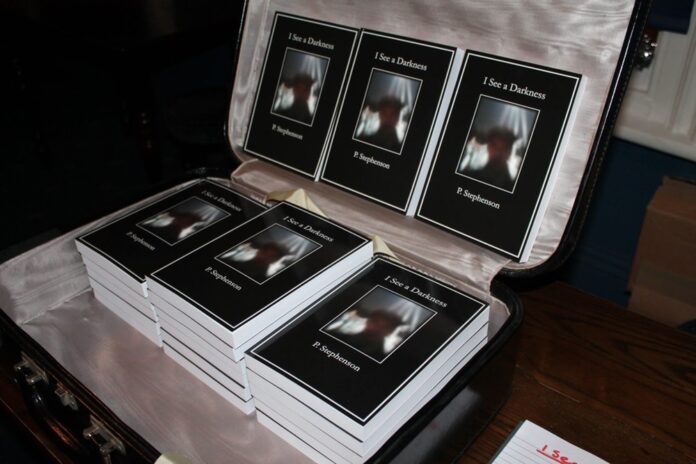 I See A Darkness by P. Stephenson (TKO Books)

Alexander Garvey Holbrook reviews the debut novel by P. Stephenson, a novel which uses live alternative music, football and ‘a dark hobby’ to answer the question “Can anyone honestly claim to know their family and close friends?”

Critics of critics and cultural hacks in general are often quick to jump on the cynicism and callousness of embittered scribblers who are less than obliging about their work. In some cases, the accusation is not meritless – Hemingway’s monosyllabic jousting with William Faulkner has passed into legend. But this often repeated scenario misses a fundamental point – Critics are not hard to please, they simply need good stuff. Honest, refreshing or enjoyable are all welcome, as are the heartfelt and the personal.

However, the problems I find with P. Stephenson’s I See A Darkness are many and are symptomatic of a worrying strain in literature which is so disgustingly solipsistic and painfully ‘male’ that it is almost impossible to dissect intelligently or coherently.

The over-arching resemblance in Stephenson’s inaugural work is to Bret Easton Ellis’ classic macabre satire American Psycho. Ellis’ literary prowess has never recovered from this dark opus and, after the amphetamine-laced boredom of Glamorama, he has been repeating himself ever since. Like Ezra Pound, Ellis’ navel gazing has resulted in the extinguishing of his talent. The power wielded by the ultra-violent tale of Patrick Bateman stalking through 1980s Wall Street has, nonetheless, far from diminished and remains a potent warning of ambition culture and its associated male excesses. Ellis, like his many imitators and devotees, have failed to appreciate this interpretation and read ‘Dark tales of modern masculinity’ when they should read ‘a warning on the dark excesses of modern masculinity’; not the same thing.

The perversion of the postmodern figure of John Self – the man with a moral centre, however skewed, with gargantuan appetites – to the modern anti-hero – disgraceful, disgusting, hateful and, yet, the protagonist – is tragic as well as stupid. Stephenson’s character, the portentously named ‘I’, is a man who lives for football and live music, chronicling his obsessions with The Sisters of Mercy, Nick Cave and the Bad Seeds, Babyshambles and many others over thirty years. This goes as far as to list every band, every show, every opening time and every entry fee into a long and wasteful appendix.

Stephenson has published this book cheaply and it shows from the cover onwards. The unattributed endorsements on the rear sleeve, along with a clanging blurb which gives a horrifying prefiguration of Stephenson’s irritating habit of deploying multi-point ellipses and multiple exclamation marks, serve to inspire alarm. Upon opening the book, the repeated formatting errors, spelling mistakes and grammatical groans render the book near unreadable. At this stage, I should not have to be readying the red pen. On this point, is this a diary, an epistolary collection of texts or a novel? With no indication of having made any progress through chapters, I suddenly found myself at chapter three, having been through a mixture of prologue and diary entries. This is as clumsy as writing gets and should not have escaped the clutches of any half-competent editor.

As ‘I’s obsessive disposition would infer, he later develops his ‘dark side’ – (you guessed it) casual murder and a boastful, grating demeanour. His verbosity when transitioned into this alter ego is simply contemptible and, when coupled with his normal interior monologue, comes across as a carefully graded insult to the reader’s intelligence.

I confess – I lost patience with this book very early on. After yomping through the quagmire of badly written and ponderous text for as long as I dared, there comes a moment when, after killing a suicidal man in his sub-Götterdämmerung style, ‘I’ notes in his diary that the two succeeding events to this snuff are the Brighton Bombing and the Heysel Disaster, each complete with their respective death toll.

This was too much. It packed contempt for the reader and for its subject into one flippant passage and the whole exercise felt like a giant waste of time. I closed the book and hurled it as far as my room would allow. No, I thought. No, you don’t get to contrast this wanton, self-aggrandising trash with moments of genuine tragedy and pathos. It is a bad offence for any book reviewer to admit they did not get halfway through a book, let alone fail to finish it, but this book makes it abundantly clear what it thinks of its readers.

As Christopher Hitchens once said, “Everyone has a book in them, but in most cases, that’s where it should stay.”

P. Stephenson’s I See A Darkness can be bought from TKO Books Big cartel.