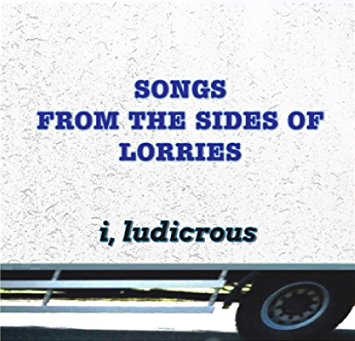 Songs From The Sides Of Lorries

New album by the Indie Legends, their first new recordings in over a year…….LTW’s Ian Canty pulls over into a layby on the A303 and considers this new communique from I, Ludicrous…

Given the ten year plus gap between The Museum Of Installation and their fine 2015 waxing Dull Is The New Interesting, I Ludicrous are on something of a roll with their new album Songs From The Sides Of Lorries emerging a mere 23 months or so later. You might think this relatively quick turnaround could manifest itself in a lack of quality control. But you would be wrong as this new LP is if anything even better than the last, clearly showing a band of enviable ability and imagination relentless honing their craft, though all the while presenting the impression of not giving a stuff.

Starting out way back in the 80s, IL have slowly but surely worked their way from their roots in jokey football/sports songs (not that they weren’t good in themselves) to penning some of the most inventive and knowing lyrics around. Songs… is full of something not actually that common in Pop Music – a sense of reality – but smartly circumventing any dourness that might entail with a hefty dose of high-quality sarkiness. This new album, Songs From The Sides Of Lorries, demonstrates their “life in the bus lane” worldview with lucidity and a surprising musical depth. It’s all here in the 10 songs that make up this record, a snapshot of everyday life in 2017, warts, more warts and all.

The beauty of I Ludicrous is they sing about things others rarely touch on, the banal day to day hassles that are a reality for 90% of us. But they do this with a knowing and keen wit. You just know the three piece of Will Hung, John Procter and Martin Brett have lived through the soul destroying jobs and their interminable meetings, the ultra-modern flip nonsense of social media, the promise of opportunity soon snatched away. I don’t know if there has been a more honest band.

Songs From The Sides Of Lorries begins with the wordless (there are some deep, slightly ominous bellows, so it isn’t quite an instrumental), near eponymous Because They Are Ludicrous and in between that and final track Obituary (“he was a lovely, lovely man” repeated again and again, showing the insincerity and banality of most RIP tributes) we are taken on a whistle-stop tour of the UK from the perspective of wage slaves (i.e. just about all of us).

Of course this could be pretty hard going if the words weren’t matched by some smart music, but the diverse palette employed on Songs…does just that. On the extended cut of the single It’s All Free, IL come on like some sort of 21st century version Psychedelia, huge Rick Wright style organ and cutting guitars framing a very Ian Dury-like tail of life on the margins of society, the tricks of the trade for getting by. The chant it’s all free, it’s on me has now wormed its way successfully into my consciousness, it is really catchy. A Very Important Meeting could be the sequel to the last album’s Clerking Til I Die. A finely drawn expose of timewasting management talk and office-based pointlessness is set against a gentle acoustic guitar backing (with the barest hint of the TV Personalities). We’ve all been there, in meeting rooms listening to the latest buzzwords and acronyms, coming out hours later none the wiser.

The tale of a bore haunting the local paper’s letter page (and no doubt their associated website more and more these days), Roger Dismal, sums up the kind of mean spirited know-all who considers their point of view of far more import than anyone else. The type who imposes their views loudly anywhere they can, in what is almost a cry for attention. The refrain cuts him down to size (“you make my life seem interesting”) while he attempts to assert his conceited “authority” on all on sundry. Today’s Man has a touch of the Specials’ Stereotypes about it, featuring the song’s protagonist rallying against society’s perceptions of him and concluding he is really “yesterday’s man” instead.

Though I, Ludicrous treat most of the subjects here with the humourous contempt they no doubt deserve, there is a dark side and more serious side to some of the offerings on Songs, with the last three selections concerning themselves with death, the isolation of the individual in the modern world and the aging process. It’ll All Be Over Soon details the type of low level hypochondria that all of us seems to succumb to when we get past out 30th birthday and why we seem to get some sort of comfort imagining we are close to death. Paul is a study in loneliness, with maybe a little in common here with the Members Solitary Confinement without the inner London setting – it’s a shout for help in a society that increasingly doesn’t hear or care. And then in Obituary, the void of death, sent off to oblivion with a few meaningless phrases. That’s life and, er, death.

I, Ludicrous, on Songs From The Sides Of Lorries, provide a cogent vista of life in 2017’s Britain. Yet it’s addictively listenable with an abundance of quotable lines and hooks. Mark Perry said that the first Clash album was “his life”. In their own low-key way, IL have moved the clock on 40 years and presented a similar vision for their generation. Yes they’ve done it again….Vive Le Ludicrous!