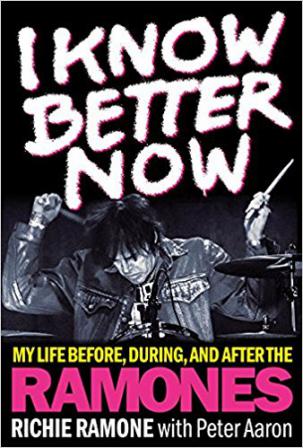 I Know Better Now: My Life Before, During, and After the Ramones

By Richie Ramone with Peter Aaron

The Ramones are genuine Rock ‘n’ Roll legends, one of those bands of whom the very mention of their name is sufficient to evoke strong images. Almost certainly, the most prominent of those images will be of them in their pomp, onstage and firing out the anthems that are now part of so many people’s DNA. Johnny and Dee Dee will have their guitar and bass low-slung, while Joey has the mic-stand in his hands and is leaning towards a frantic crowd. Yet who is at the back keeping time through this glorious assault on the senses? Well, from 1983-1987 it was Richie Reinhardt, Richie Ramone, and this book is where he tells his story. With the passing of Joey, Johnny, Dee Dee and Tommy, the testimonies of the surviving Brudders take on added value and, while there may not be anything earth-shatteringly new here, Richie did spend four years in the inner circle so his story will have wide appeal.

The first hundred or so pages chronicle the development of Reinhardt in NYC; plenty of sex, drugs, violence and car crashes if that is your thing. However, far from being a tear-away, he comes across as grounded yet passionate about his career which, after gaining experience drumming in New York outfits The Shirts and Velveteen, in 1983 saw Richie is invited to audition for the Ramones who were keen to replace an increasingly unreliable Marky.

His drumming ability suitably impresses and, barring a hitch in his first performance when a song has to be re-started, he is soon providing the backbeat and apparently speeding up The Ramones set by a couple of minutes. That is no mean feat!

Since The End of the Century documentary, there is little that is not known about the inner-workings of the band though this book does provide some new snippets and puts a little more flesh on the bones of what we do know. Richie insists for example, that the difficult relationship between Johnny and Joey (after Johnny hooked up with Joey’s girlfriend) was not as bad as has been made out and that he never saw any antagonism between them. There is also the warm-ups that take place before every show. Johnny and Dee Dee would shout, “Have we got to play for these shitty kids again?” whilst the band warmed up their muscles for the ordeal that was a live performance. Once on stage, the rule was leather jackets (hung in their own flight case) had to be be worn for the first few songs, leaving Richie a matter of seconds to remove his when Joey said “Good evening” around five songs in or endure it for the rest of the non-stop performance.

Persuaded to become a songwriter by Joey, Richie pens the classic Somebody Put Something in my Drink. Based on a real event from his pre-Ramone days, the song becomes one of the landmarks during Richie’s period in the band, it also sees one of two pieces of advice from Richie; never drink anything that’s already open. The other is be nice to animals and both make perfect sense.

What fans will be interested in is an insight into the workings of the band and the personalities involved. Joey emerges as the sweet character you would expect, yet tortured by OCD and a lack of feeling in his foot that led to numerous infections. He strikes up a friendship with Richie and credits him as “the greatest thing to happen to The Ramones” due to the renewed energy he injected. Dee Dee had his own demons to fight but, unlike with Joey, Richie’s friendship with Dee Dee endures beyond his departure from the band working on solo recordings and having an interesting, if ill-fated, involvement in the Fat Boys version of The Twist.

However, unsurprisingly, one figure towers above the narrative – Johnny Ramone. Despite a few shared visits to Baseball early in his time in the band, Richie finds the taciturn guitar hero very difficult to interact with. Stories of Johnny’s meanness are legendary, but you may well raise eyebrows at his insistence on returning home to New York every night if the gig was within five hours drive. Richie paints a picture of a man long-since unconcerned with the creativity of making new music and who questioned the point of spending too long on a new album when no one was going to buy it. Johnny’s prime concern seems to be accruing enough cash to see him through retirement and doing this with as little outlay and aggravation as possible. Hence studio-time was strictly limited and foreign tours were seen as an expensive nuisance.

Ultimately, it is Johnny’s alleged obsession with cash that causes Richie to leave the band. Growing tired of seeing the other three receive envelopes stuffed with cash from lucrative merchandise sales every night, Richie asks an incredulous Johnny for a ten percent share. The offhand refusal eventually leads Richie to leave the band after a show in New York, waving at the other three through the roof of a white limo he had hired for the occasion.

So ends Richie’s association with The Ramones bar the inevitable legal action regarding writing and publishing rights. However, there is clearly regret now at the cause and manner of his departure and Richie Ramone is still to be found out on the road keeping the memory alive.

I Know Better Now is an essential account of Mid-Period Ramones and a graphic peek inside one of the true rock legends.