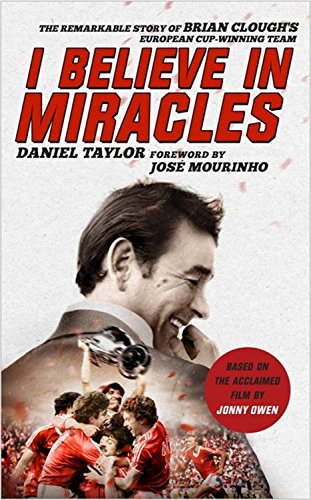 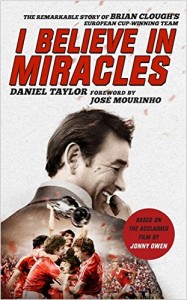 I Believe In Miracles by Daniel Taylor

Guardian Chief Football Writer Daniel Taylor has written a companion book to Johnny Owen’s film which documents the remarkable period of success enjoyed by Nottingham Forest in the late 1970’s.

In the lead up to Christmas, Manchester United Manager Louis Van Gaal stormed out of a press conference less than a week after Jose Mourinho, seven months after winning the Premier League title was sacked by Chelsea. Both these events were obviously fully dissected by the media,with speculation raging that Mourinho, who writes the Foreword to this book, would replace the beleaguered LVG. This is symptomatic of a curious contradiction that seems to be prevalent in football today; the richer the clubs and players seem to get, the greater the attention that seems to be placed on the manager. The focus on managers has now reached the level where a fixture is previewed as Klopp v Wenger rather than Liverpool v Arsenal for example, or who has the most stylish and cool manager as in Exeter City v Liverpool last week. Daniel Taylor’s superb study of the five year rise of Nottingham Forest is a pertinent reminder of how much has, and crucially has not, changed.

The cult of the manager may not have been started by Brian Clough, but he certainly took it to previously unimaginable levels. A combination of his ego and increasing exposure led to inevitable clashes between Clough and Sam Longson, the old-school chairman of Derby County who wanted his manager to concentrate more on his club. Clough resigned, regretted it then became embroiled in forty four days of hell at Leeds. He was not exactly undamaged goods when appointed at Forest on January 6th 1975 and there was divided opinions among decision makers at the club. The fans had no such doubts, seeing in Clough their best chance of salvation. They were right. What followed is certainly one of the most astonishing footballing stories of my lifetime as Clough lifted the ordinary provincial club from thirteenth in the old Second Division to European Champions two seasons running within five years. I often tell my football-mad sons about this and they simply don’t get it and why should they? They have no reference points in this money drenched era and such a story could never happen again, unless some multi-billionaire decided to throw everything at a medium club, and why would they? I still can’t see it though and that’s what makes the title of this story so appropriate – this was truly a miracle.

Anything related to Clough is of interest to this writer, and there is plenty here to get your teeth into. We learn of the washing machine purloined from the kit room at Forest as a make-weight in a deal to sign Larry Lloyd and Clough’s habit of taking the team to the City Ground on a Friday, not to run through set pieces or tactical manoeuvres, but so they could indulge in a game of hide and seek in the stands. However, the real joy of this book is the manner in which Taylor has avoided the temptation to produce yet another exhaustive study of Clough and instead allowed the players themselves to tell the story. As interviews with the likes of Frank Clark, Ian Bowyer and John McGovern reflect, it is clear that team unity was crucial to their success. Unorthodox preparations for big games was routine for this group, with Clough encouraging drinking to relieve stress as well as strolling round Amsterdam’s Red Light area the night before playing Ajax in the European Cup Semi Final, even sending a young Gary Mills to obtain a price list from one establishment.

Just as integral to the successful management was Clough’s foil Peter Taylor whose eventual decision to join Clough at Forest was the catalyst for the incredible run of success. Taylor’s ability to spot a player was a great asset, as was his sense of humour and ability to have the team in hysterics to relieve stress. The account of his following Kenny Burns (Clough insisted on calling him Kenneth) to the dog track to check on his gambling habit prior to Clough signing him has assumed legendary status but the reality is the managerial duo turned Burns from an average striker to an outstanding centre-half. Burns went on to form an iron barrier in defence with the aforementioned Lloyd, who had such a high opinion of himself the other players believed that he probably  shouted his own name out during sex.

Maybe most instructive is the fact that a number of the players who triumphed in Europe, such as Tony Woodcock and Martin O’Neill, were also at Forest when Clough arrived to a club languishing in Division Two. Difficult to conceive today when multi-millions are spent in pursuit of European glory, but Clough turned a collection of players who were not exactly household names into winners. Having said that, he did make Trevor Francis the first million pound player (and then played him in a third team game) and had arguably the world’s finest keeper Peter Shilton. Clough’s tactical strategy must have been more detailed than he ever publicly admitted but the overwhelming impression is that the great successes achieved were down to welding a disparate group of individuals into a team that was much greater than the sum of its parts.

This is a book that will be welcomed by all those who remember the achievements of the team that incredibly are not represented in the National Football Museum’s Hall of Fame despite winning successive European Cups yet Aston Villa find their way in for winning it only once. Hopefully the film and Taylor’s book will go some way towards convincing the powers-that-be to reconsider. If not, this book serves as a fitting tribute and is also an essential testament of a footballing period that can never be repeated; a story so far-fetched today that both those who were and were not around at the time will probably view it as a ‘miracle’.

Watch the trailer for Jonny Owen’s film below