Home Blogs I Am Kloot- live review by Stuart Hatfield

I Am Kloot play a raw, emotive music that lives on its nerves. Powerful and passionate they come out of Manchester and are part of a late night coterie of bands that include their friends Elbow, Stuart Hatfield was blown away by their live intensity.

“We’ve never played Halifax before”Â says singer John Bramwell near the start of this sell out gig. It’s said partly apologetically and partly triumphantly as the Mercury nominated I Am Kloot have now arrived, in both senses of the word.

Playing to a packed 900 year old Minster is clearly having an overwhelming effect on the band, who look like the cat that’s got the cream. A small stage filled with musicians and instruments provides the perfect front in a Minster that boasts 500 year old decorated wooden ceilings, dark elaborate wooden pews and candle lights flickering onto the stained glass windows, ensuring that we all go home “buzzing”Â, as they say in Manchester.

All ten tracks from last year’s stunning album “Sky At Night”Â are given an airing, the three piece band augmented by four excellent musicians. We are also treated to selections from the band’s now ten year old back catalogue, which only helps to highlight the development of the group from promising to full-to-burst talent.

A 100 minutes set covers troubled thoughts, alcoholism, hope in the face of adversity, longing for someone who still haunts you and then tales of deep, deep happiness that hit home without using a hammer to do so. And, there is a story to tell ; you can slip into their songs and imagine that they are just for you. This is delivered through strumming acoustic melody seamlessly linked with a sparse and spacious bass and solid beats.
At their best, and most boisterous, I am reminded of John Lennon, the Bunnymen and a hint of Badly Drawn Boy.

Bramwell then slows things down with a couple of unaccompanied songs and delivers a short but heartfelt “sermon”Â to those members of the audience who are incapable of sitting quietly and listening to some of the best music of the last decade being played in beautiful and atmospheric surroundings. I still don’t understand why some people make a night of it to travel to see a band and then talk all the way through the set. Especially this one.

A truly wonderful occasion, the might of the Minster adding to the power of the performance. I read that I Am Kloot are on the edge of greatness. Wrong, they are already there. 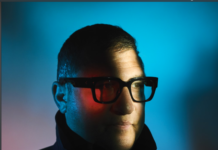 Watch this! John Robb in depth interview with Poly Styrene in...

May 6, 2011
We use cookies to ensure that we give you the best experience on our website. If you continue to use this site we will assume that you are happy with it.Ok