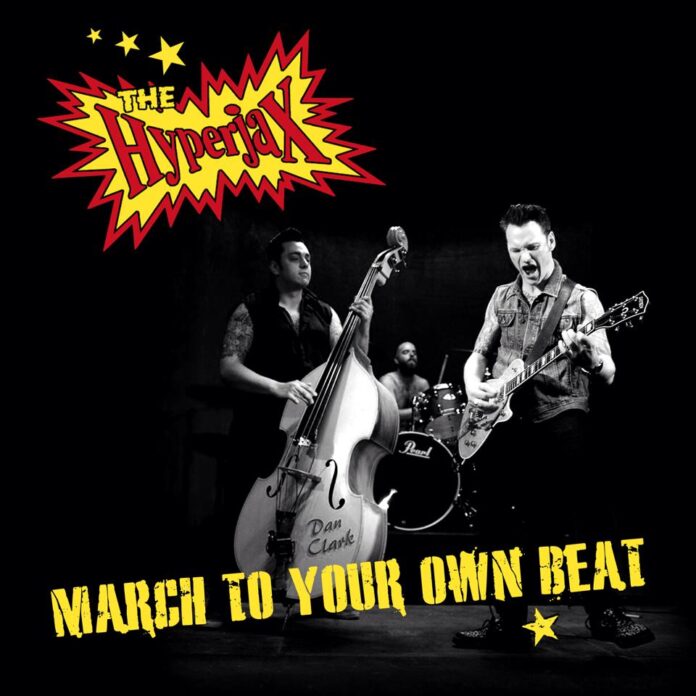 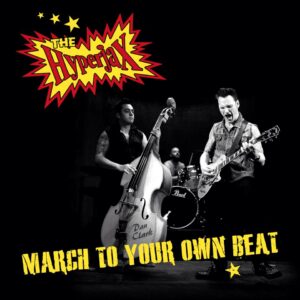 March To Your Own Beat

Richie Rochdale kicks off his first album review for Louder Than War by dipping into some raucous rockabilly by North West band The Hyperjax.

Partly due to this author’s ownership of a “Blood On The Cats Part III” Psychobilly compilation LP, reviewing Hyperjax new/return record isn’t as daunting as might first be expected. In fact, “March To Your Own Beat” takes me back to my own, wild(-ish) youth of tribal exploration and musical cross-pollination. Seven years after releasing their last album, this three-piece version of the band delivers 45 minutes of New Rage Rockabilly and mucho Wreckin’ is about to commence! Rockin’ Music is alive and well and living in Preston, Lancashire (apparently).

Of the twelve songs on offer, nine are out-and-out Psychobilly, one is a bit more Surf Punk (“Blood And Sand”), one is a good, old fashioned Rock’n’Roll tune (“Three Sheets To The Wind”) and one sounds like The Pogues! (“Sweet Solitary”). Singer/guitarist Sam Woods’ latest incarnation of The Hyperjax comprises of Woods himself, Neil “The Wolf” Holden on drums and Dan Clark on signature double bass and backing vocals.

So what do we get for our money? Well, as Sam recently described on Faceache, “We’re bringing some songs back from the late ‘90’s when we were first knocking around, we’ve got some from our setlist from about six years ago and we’ve got some that have been written as late as this year.” I’m quite sure that the band’s fanbase, the Hyperloons, will be able to distinguish which song fits into which bracket but the final product is an absolute blast!

A marching drumbeat soon gives way to that trademark, hundred miles per hour, ‘billy bombardment as Hyperjax open the mayhem by “Staring Out The Old Guard.” Indeed, they entreat us to march to our own beat. This aural assault continues on “Hard Knock Chops”, the first of three songs featuring former member Liam Revenge on guest double-bass. The Punk elements of their music are highlighted on these first songs, bringing to mind The Exploited’s thrashy oeuvre, perhaps? Liam quickly reappears on third track, “Blood And Sand”, an interesting departure into groovier territory for the guys. “City Of Broken Rain” starts with a nice, “rain” sound-effect but I can’t stop thinking how this band reminds me of The Long Tall Texans—. Fifth song in, “Three Sheets To The Wind”, and we’re firmly on an old skool-trip visiting The Stray Cats (lovely tune, too). Last one of the first side, “Whatever Happened To The Krewmen?”, is Liam’s final song for this album, with a quick nod to The Stranglers. It holds some special resonance for me as I remember a fallen comrade who dearly wished to be “the double-bass player in a Psychobilly band.” Sadly, he never got to realise his dream.

Side two begins with, “Blast Me Into Outer Space”, which should have been the lead single of the record. At times, Woods’ vocals do so conjure up the voice of the late, great Joe Strummer of The Clash. Track 8, “Sweet Solitary”, shows off Hyperjax versatility with guest melodeon by James Tween and it could easily fit in on a Pogues setlist. My fave song of the album is up next, “Burn In Your Own Flame.” What at first sounds like the comedy-horror lyrical content of so many Rockin’ bands (The Frantic Flintstones for example), turns out to be a break up song inspired by the words of Nietzsche. A trio of Neo Rockabilly numbers end “March To Your Own Beat.” Track 10, “It’s The Nature Of The Beast”, has a sentimental appearance by (another) former double-bass player, Keith Green, now inactive because of tinnitus. Sandwiched inbetween that and last track, “Carats Briefs And Boils”, is track 11, “Angry Young Man”, again showcasing something a bit different with piano from Thomas Harrison.

In truth, I love this album to pieces but, unfortunately, it won’t escape its marginalised appeal as a “genre” record. If Morrissey was to one day revisit his 1991 Tour and look for a new Alain Whyte or Boz Boorer (and, physically, Sam puts me in mind of Polecats man Boorer, in ‘91) I would have no hesitation in recommending Mr. Woods. Until that day, I’m afraid only you and I will possess our “secret knowledge” of The Hyperjax, dear reader. And that is such a great shame.

A raucous but musically adventurous barrel of Rock n Roll mayhem, “March To Your Own Beat” gets 8/10 for the sheer amount of fun it provided.

Words by Richie Simpson
Photo + CD cover photo by Melanie Smith. More work by Mel on Louder Than War can be found at her author’s archive. You can find her on Facebook and Twitter. Photography portfolio can be found here: mudkissphotography.co.uk.