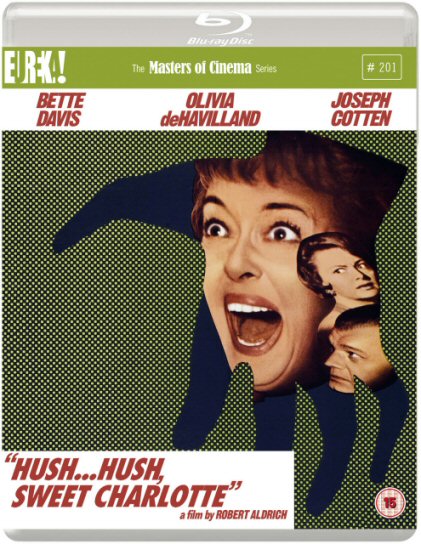 Jamie Havlin examines the classic American psychological thriller originally conceived as an unofficial follow-up to What Ever Happened to Baby Jane?

Here Bette Davis plays Charlotte Hollis, while the role of her cousin Miriam is taken on by Olivia de Havilland, who has been in the news recently after the failure of her lawsuit against the producers of American TV series Feud: Bette and Joan, in which she claimed she’d been unfairly portrayed. The Bette in that title, of course, being Bette Davis. The Joan being Joan Crawford.

Director Robert Aldrich had originally wanted Davis’s fellow Baby Jane star Crawford in the Miriam role but that legendary feud meant that despite having signed on the dotted line, Crawford later bowed out, citing illness as an excuse so that she couldn’t be sued for reneging on her contract. There are some amusing details about this in Kat Ellinger’s audio commentary.

Miss Charlotte, when this movie begins, is a young debutante in love with an older, married man John Mayhew (Bruce Dern). Her dictatorial father has discovered a plan between the pair to elope to Baton Rouge after an upcoming grand ball – he vows to put an end that idea.

On the night of the ball, Mayhew jilts Charlotte and then, in a moment of Hitchcockian horror, someone takes a cleaver to his hand and then his head. The killer’s identity isn’t revealed but the next time we see Charlotte, her white ballgown is covered in a big splodge of blood. The gathering collectively suspects she is the killer, but she is never convicted of the crime.

Flash-forward almost forty years to 1964 and the events of that grisly evening have continued to haunt Charlotte ever since. She has stayed closeted in the same mansion in the fields of Louisiana but is now being forced to move, her home to be demolished to make way for a bridge and new roads. We’re told that ‘she could live anywhere in the world like a Queen’ but she dreads the idea of being forced out. And Charlotte is beyond stubborn, as we’ll soon discover.

A team of workmen begin some initial demolition work, getting as far as bulldozing down a gazebo before Charlotte brandishes a shotgun at the men. She even lets blast with it when they fail to respond to her threats.

Davis is in fine form here, attacking the role with an amazing relish. For much of the time, she is spectacularly over-the-top with those famous piercing eyes bulging as she throws tantrums, screams like a banshee and smashes anything that comes to hand.

‘She’s not really crazy,’ Sheriff Luke Standish explains to the workers’ foreman (George Kennedy). ‘She just acts that way because people seem to expect it of her.’ Not everybody in the local parish would agree with this assessment, though. He gives her ten days to vacate the mansion, or she’ll be summoned to court.

Charlotte is soon joined by her rather more urbane cousin Miriam, who she somehow imagines will be able to magically solve her eviction nightmare. This is unlikely. And not only that, but Charlotte also appears to worsen mentally with Miriam’s arrival, suffering what appear to be vivid hallucinations, where she hears and sees her former lover.

The film is nowhere near as entertaining as Baby Jane, but it is often still terrific fun albeit not without faults. The plot isn’t always entirely logical and there’s maybe one twist in the tale too many as the film nears its conclusion.

I also found the performance of Agnes Moorehead as Charlotte’s servant Velma, borderline annoying, even though she won a Golden Globe for it as Best Supporting Actress. It struck me as though she was determined to outdo Davis’s histrionics but without a hint of her subtlety. The rest of the cast, particularly Davis and de Havilland, almost make up for this.

Hush… Hush, Sweet Charlotte received seven Academy Award nominations. It failed to win any of them and fell into relative obscurity. Luckily, there’s been a revival of interest in it in recent years as critics from the Guardian and elsewhere have started promoting films such as this, What Ever Happened to Aunt Alice? and What’s the Matter with Helen? as ‘hagsploitation’.

This release by Eureka is the first time Hush… Hush, Sweet Charlotte has been available on Blu-ray in the UK. Extras include two feature-length audio commentaries: Hush…Hush, Sweet Joan: The Making of Charlotte and Bruce Dern Remembers, and a collector’s booklet featuring a new essay by Lee Gambin, archival imagery and more.

For more on the film: https://www.eurekavideo.co.uk/moc/hushhush-sweet-charlotte