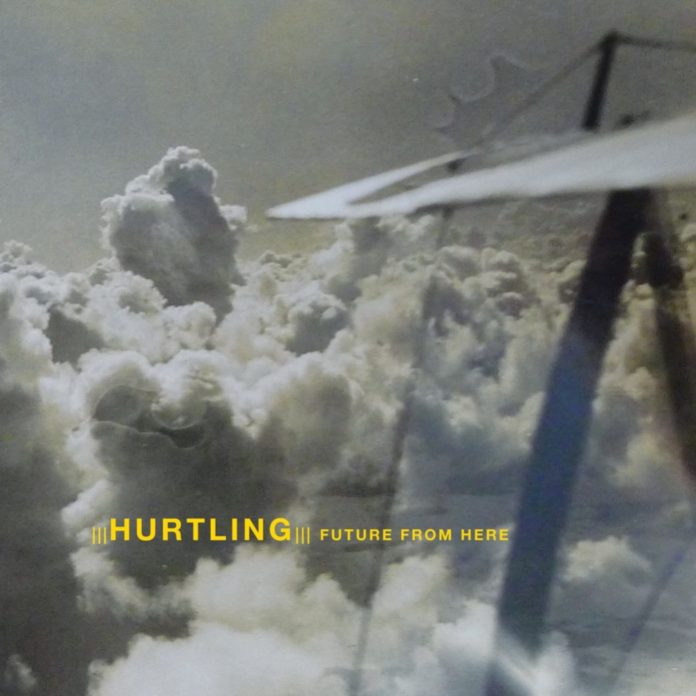 Navigating soundscapes from the atmospheric to the psychedelic in this skilfully crafted noise pop album of dream-gaze and blazing textures. Says the press release.   Beyond categorisation says Ged Babey, but a serious, progressive benchmark in female-lead alt-rock/dream-pop.

Shoegaze aka Dream-pop is one of those genres that really never was -but is having quite a healthy afterlife as an often-used descriptor.

Hurtling are a dream-gaze band who want to rock like bastards and every now and then they do.  At the same time they are a very listenable ‘commercial’ proposition. They have carved out their own niche already and arrive pretty much fully-formed.

Hurtling are a band who’s sound is difficult to describe without resorting to ‘purple prose’… and because it doesn’t stay in one place long enough.

They are head and shoulders above almost everything (in guitar, bass, drums, voice, three-piece band circles in the UK) yet completely beyond and aside from the mainstream. (They remind me of how Radiohead were when they released Pablo Honey – seemingly out of nowhere.. and out on their own.)

Future From Here is sonically perfect. Technically faultless. The guitar sound(s) and playing are things of sheer beauty.

Not that it’s too clean, the bass has a lovely gnawing sound and a rattle like an old wooden speaker-case.   Don’t Know Us has little moments of ‘Pretty Vacant’ type James Dean Bradfield guitar which cut in unexpectedly. like a tourettes tick.

This is an album by-musicians, for-musicians in a way. Persons with countless effects-pedals and pre-amps: gear-heads…(How do they get that sound?)

Although they are a ‘new band’, Hurtling are a band of professional musicians…. yet it is guitarist/vocalist/lyricist Jen Macro’s vehicle to prove that she is much more than a side-person…

Lead singer/guitarist Jen Macro has played live with a number of respected artists including My Bloody Valentine, Charlotte Hatherley and Graham Coxon. Drummer Jon Clayton has run One Cat Studio in Brixton for over 10 years.  Simon Kobayashi (Bass) is founding member of Smallgang (Damnably records) and has lent his musical talents to Shonen Knife, Crumbling Ghost, Kath Bloom and is currently working with Jon Fine (Bitch Magnet).

Jen’s voice is subtle and on a level where the voice and guitar blend, rather than one dominate. Her lyricism is excellent though: Ghost… Write… My… Life.

Each song as a couplet which stays with you…. the Faith Healers-like opener ‘Start’ has the one above.  Memory Cassette  – the next single and a joyous Manics meets Lush via the Breeders amalgam and a guaranteed ‘hit’ in any sensible universe has…

Hurtling play either dream-pop that rocks – or rock that dreams of being something more transcendental.

You can hear the dynamics of Nirvana/Pixies, and the influence of a whole host of others American rockers  (the all but forgotten except by me and their producer (John Robb) Bandit Queen…but that is probably just some cosmic coincidence)   yet overall, Hurtling have a sound which is as fresh as you can get in 2019.  Introspective one second and soaring the next, with a muscular kind of effortlessness.

‘Future From Here’ was written by Jen Macro as an ‘exploration of loss and hope’ while in downtime on tour with My Bloody Valentine. The concept started sonically and grew from there, adding song structures and lyrics that fitted phonetically, creating a soundtrack to music Macro wanted to hear.

The album kicks-off at the ‘Start’, a beginning of sweet melodies and a love song from ‘me to you’, crunching straight into ‘Memory Cassette’, a sun-drenched medicine for melancholy. ‘Feel It’, bold and courageous dives deeper into darker spheres, while ‘Summer’ paints beautiful melodious colours over the top of your sunscreen, lifting you out of your melancholy gently and purposefully.

That is the purple prose I mentioned.

I saw Hurtling at the Loud Women Fest 4, where their unassuming stage presence and technical excellence set them apart from most of the other bands.   The ebb and flow and peaks and troughs of the music kept the audience enraptured.  This album does the same.

The name Hurtling is clever; the trajectory of an object, like a comet, blazing thru the sky – or in a Yoda-like adaptation (youngling) – one who has been hurt whilst young.

So lets all head to the ‘Future From Here’ and look after each other.

Simply, a great album. A stunning debut and a future classic.