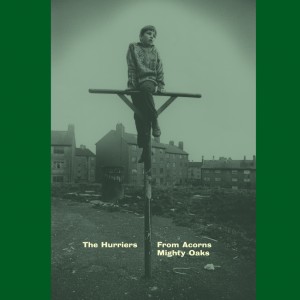 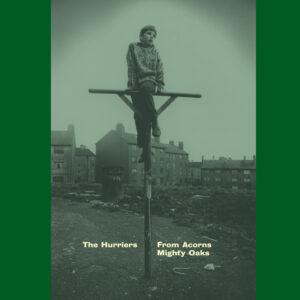 South Yorkshire band The Hurriers are releasing their debut album appropriately enough on Mayday, International Workers Day. Describing themselves as ‘a proper socialist band, like every town needs’, this storming release also drops just as the excruciating election campaign reaches its climax (or nadir, take your pick).

Having been together for about two years, The Hurriers already have an impressive pedigree having played Glastonbury at the invitation of Billy Bragg, a festival with New Model Army and support slots to Sleaford Mods. Their first single, 2014’s Truth and Justice, was a searing reminder of the events at Orgreave 30 years earlier and lead singer Tony Wright followed that up by masterminding the Orgreave Truth and Justice album which featured an impressive compilation of acts like Paul Heaton, Sleaford Mods and Louise Distrass.

There’s certainly always room for such an energetic, political band as The Hurriers and From Acorns Mighty Oaks is an outstanding debut and in many ways a breath of fresh air in the current music scene. The obvious reference points are The Clash, SLF, The Jam and The Redskins but we must acknowledge that the musical landscape those bands originally occupied is a different world to the one into which The Hurriers are launching From Acorns Mighty Oaks and that politically inspired records are now, if not quite as rare as hen’s teeth, not far from it.

There is an inspired opening to first track Spectemur Agendo, the Latin motto from the town crest of Barnsley, which means ‘let us be judged by our actions’. The intro is actually the voice of Ian Nairn, a hugely interesting character who railed against town planners and the havoc they wrought on small town centres in the 1960s. An irresistible bass line thunders in as the words of Nairn praise the spirit of the people of Barnsley whilst condemning the environment they have been given. As a scene-setter, this is right up there with the best of them – a song for all the people of the neglected small towns scattered over the country. The true joy of From Acorns, Mighty Oaks is that when vocalist Tony Wright sings about the strength of his community in adversity, the sentiment applies to many others around the country. This is a political album but also an intensely personal representation of a landscape that many of us will recognise and empathise with.

There are no shortages of rousing sing-along opportunities here and Enjoy The Storm and You’re Not Gagging Me exemplify the infectious nature of this excellent first offering. There’s also an outstanding cover of The Chris Evans Collective song Defiance that sits very snugly here. No one needs telling about the political arguments related to the NHS and, despite what some may wish for, it seems to be a ‘no compromise’ issue for much of the electorate and the track Have Faith to Fight is a sterling defence of it and the principles which founded it.

‘We’re all in this together’ is probably one the most crass political slogan/comments of the 20th Century, right up there with Thatcher’s ‘the enemy within’ (also relevant here) and Stanley Baldwin’s 1929 Election slogan of ‘Safety First’. The hypocrisy of this statement, laid bare in a week that the reveals the super-rich have doubled their wealth under the Coalition government while those living in poverty has increased according to any statistics you wish to use, is the theme of Happy Families. This is a swinging attack on ‘daddy’s little rich boy’ and the tax-dodging culture that seems to be a fascination of those who have rather a lot already. Followed up by their debut single, the Orgreave inspired Truth and Justice, this is as heavy a pair of political songs as you could wish for. Beat and Then Some is a frighteningly realistic tale of the impact of poverty on a family caught in the spiral of debt that adds a social context to some of the issues covered.

However, despite the themes covered, the overwhelming tone of the album is one of optimism and solidarity in the face of adversity. Once again produced by Alan Smyth of Arctic Monkeys, Pulp and Richard Hawley fame, The Hurriers have produced an album that perfectly captures the mood of many in Britain today, and is jam-packed with sing-along classics too. If you like your politics with a healthy dose of music then this is the album for you. If you’ve never really been interested, maybe now is your chance to try it.

September 21, 2012
We use cookies to ensure that we give you the best experience on our website. If you continue to use this site we will assume that you are happy with it.Ok