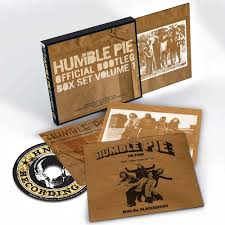 One regret I will always have is that I never caught Steve Marriott, one of the greatest musical performers the UK has ever produced, live. I was far too young to see the Small Faces in their prime or even their troublesome 1977 comeback (when they were supported by some young ‘erberts called Cock Sparrer). I only just started school when Humble Pie, the band he formed with Peter Frampton at the end of the 60s, were in their pomp too. But I was old enough to go along to see his later efforts, like the smuttily named Packet Of Three, before his tragic death in 1991. I just never got around to it. The lesson is I suppose, don’t take things for granted and grab every opportunity, as it won’t be there forever.

This box does give the chance to at least eavesdrop on Humble Pie on thrilling live form in the mid-70s. Originally Marriott had tried to get Frampton into the Small Faces, but when that failed he split from the band after a New Year’s Eve gig and started Humble Pie with him instead. Though the Small Faces had moved on in leaps and bounds since managing to get away from Decca and Don Arden’s vice-like grip on them, as a live proposition they were still playing a “Pop” set which reached back to their early days. This had frustrated Marriott as he felt they weren’t living up to their potential as a live band. He also wanted to go in a harder Rock direction and also make inroads into the Blues and Soul that had always been his inspiration and allowed him to use his voice to its fullest potential. Hence Humble Pie.

By this time of the first gig included here, Peter Frampton had left the band to pursue a solo career and had been replaced by Clem Clempson, Ex-Bakerloo and Colosseum. He joined the already in situ bassist Greg Ridley and drummer Jerry Shirley (who also played on Syd Barret’s solo stuff), along with of course Steve Marriott on guitar and lead vocals. Shirley gives some great and detailed information in the accompanying booklet, which brings focus to the events documented on disc.

On the “Official Bootleg Boxset Vol 1” we meet the band first in 1972 at the Aire Crown Theatre in Chicago. This collection is, as you might expect, a little lacking sonic perfection (audiophiles might want to look away for a while), the drums coming over a little hollow on this gig recording. Having Frampton in the band initially was in part to take the pressure off Steve, but being such and exuberant performer (he auditioned for the Stones before Mick Taylor was drafted in, but his inability to remain in the background meant Jagger blackballed him for fear of being upstaged) he was clearly at home being an upfront band leader. This is what we get here, a brilliant singer/showman fronting a hot live act, with a set that mainly relied on R’n’B and Blues standards and the odd Rock ‘n’ Roll cover as well as some of the band’s own choice material.

Slade supported that night, hot off the back of British chart success, but pretty much still unknown in the USA. The chance to hear two such “force of nature” vocalists as Holder and Marriott on the same night must have been something to savour. They were almost certainly the best support act to go along with Humble Pie, who were playing similar crowd-pleasing high-velocity 70s Rock. The differences between Humble Pie and Marriott’s previous outfit are immediately apparent: see the way that they re-shape the Stones “Honky Tonk Women” away from the Rock treatment Jagger and Richards gave it and back to the Blues (but keeping the requisite “heaviness” that was their trademark).

The next selection (which is rather awkwardly spread over the end of disc one and all of disc two, a shame that) is from a year later in Tokyo. By this time the line up had expanded to include Venetta Fields, Clydie King and Billie Barnum (AKA the Blackberries), whose soulful backing vocals and female presence gave them a different dimension in comparison to other more resolutely macho outfits like Led Zeppelin and the Who. Marriott sing-songs his stage announcements in the mode of Little Richard and the R ‘n’ B influence is if anything greater than at the previous gig. Humble Pie stretch out through a long version of Junior Walker and the Allstars’ Motown classic “Roadrunner”, with the Blues/Soul origins of the track being fed through Pie’s explosive Rock machinery.

The sound here captures the drums better and the crowd noise is very clear, seems like an “audience recording” this one (and the Tokyo crowd’s effort in clapping along to “Hallelujah (I Love Her So”) is much better than Chicago’s!). It’s a little muffled in places but probably a superior recording to the Chicago show. Performance-wise it does tend to back up drummer Jerry Shirley’s assertion that the band never had a bad night, seemingly on top form. Humble Pie ended their set with the Glam stomp of “Oh La-De-Da” and I would guess sent most of the paying customers home happy.

Disc three commences with the band’s performance at that legendary gig in May 1974 at the Valley, home of Charlton Athletic Football Club, where the Who broke the decibel record for Pop music concerts. Also on that bill were Bad Company (making their bow) and Lou Reed among others. Shirley seemed to have started a rumour that the band and Marriott was going to hark back to their 60s days seeing as they were playing alongside old Mod running mates the Who, which Steve took up by cutting his hair and wearing some skinhead style gear on stage. Living up to the rumour, the band started their set with “Whatcha Gonna Do About It”, a heavier version which was to be expected given the changing times, but it is still a good ‘un. Marriott and the band are giving it both barrels here without doubt – they wanted to show the headliners they weren’t just there to make up the numbers.

The sound on this section is pretty good, the vocals a little distant at times but otherwise ok. Both “Thunderbox” and a lengthy “30 Days In The Hole” make their debut here and both make me think of Lobby Loyde’s band Coloured Balls, being two pile-driving pieces of no-nonsense Rock ‘n’ Roll. In contrast with the first two gigs here, Marriott talks to the audience a fair bit in between songs rather than singing. Maybe it was because they were on home soil? Whatever the reason it makes this gig the highlight of this box for me.

The final set is from London’s Rainbow venue less than a month later. This was for a Don Kirschner “Midnight Special” TV show that would go out on NBC in American. The sound here is hindered by “too loud” audience noise at the beginning and end of each song, but as you might imagine otherwise good to very good. Marriott tries to get the audience going and the band are firing on all cylinders. There are only four songs from this gig on here, so these I imagine were the ones picked for broadcast and professionally recorded.

Of course by its very nature this box is not really the best place to start for newcomers to Humble Pie or Marriott’s previous or later work – these are rough and ready but fairly good live recordings, good bootleg quality, with all the excitement and imperfections that might imply. Humble Pie were at the height of their US fame at this point in time and their live show was the pinnacle of their craft. The crude roots of the recordings do not detract from this being a fine collection for long-standing Humble Pie fans and Marriott nuts, also giving those who never had the chance to experience Marriott/Humble Pie in the flesh a golden opportunity to hear exactly what the fuss was all about.