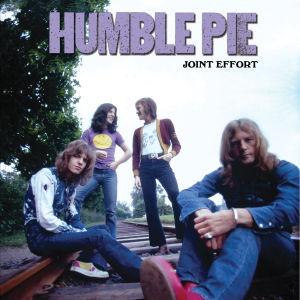 Raw and abrasive, rockin’, soulful and funky as hell, Humble Pie’s long-lost ninth studio album finally sees the light of day. And it proves well worth the 44-year wait.

In 1975, when the notoriously volatile Steve Marriott walked out on Humble Pie to audition for the vacancy left in The Rolling Stones by Mick Taylor’s departure, the future looked bleak for the supergroup formed five years earlier by members of The Small Faces, The Herd and Spooky Tooth.

Brought in by Keith Richards, Marriott’s audition for the biggest rock’n’roll band in the world, went well; too well, according to Humble Pie drummer Jerry Shirley. “Steve at his best – he was the only person in the world who could give Mick Jagger a serious run for his money. He could sing, he could front a band, he could play great guitar. And Mick wasn’t having it,” reveals Shirley in the excellent sleeve notes.

Marriott reluctantly returned to the fold for a US tour and agreed to make what would become the Pie’s eighth studio album, Street Rats, produced by Andrew Loog Oldham, the impresario and former Rolling Stones manager who had first put the band together and released their first two albums on his Immediate label – as well as The Small Faces’ Ogden Nutgone Flake. Oldham insisted on recording at LA’s Olympic Studios while Marriott wanted to work at his own home studio, Clear Sounds. A compromise was reached whereby the band would record at Olympic each day while Marriott, his energy fuelled by a raging cocaine habit, laid down more tracks at home when the sessions finished for the day. He worked mostly with bassist Greg Ridley – hence the title Joint Effort – and a couple of the songs (covers of The Beatles’ Rain and Betty Wright’s Let Me Be Your Lovemaker) made it on to the ‘official’ album, Street Rats.

The rest, however, were shelved by the record company, following poor reviews for Street Rats, and stayed there for the next 44 years. Until now.

According to Shirley, the band was effectively breaking up while the songs were being recorded but that tension works its way into some tumultuous performances, particularly by Marriott himself. It’s a loose, sloppy sort of album, characterised by a raw urgency and an anarchic spirit, and it’s all the better for that. It’s the sound of people pouring their energy into what they love, rather than the sound of a band trying to meet a contractual obligation for a record company.

The opening and closing versions of James Brown’s Think almost achieve the impossible in coming a cigarette paper away from being even funkier than the Godfather himself, the riff as taut as a suspension bridge and horns squealing behind Marriott’s sandpaper rasp of a voice. Other songs here, not least the dirty rocker Charlene (“Lemme tell ya… when I was rich I was a sonofabitch,” growls Marriott) and the tender blues Midnight Of My Life, sound as if Marriott might even be enjoying himself, unwinding at the end of a long day. While it’s easy to see why their US label did not see the album as commercially viable at the time – especially coming after near-universally disparaging reviews of Street Rats – today it seems like a bit of a classic. It’s certainly far better than Street Rats and, for a band who only really seemed to capture their spirit on live recordings, ranks alongside any of their studio albums.

In fact it’s Marriott’s voice which stands out most on the album. Ravaged by drink and drugs it may have been but its gravelly roar has never sounded finer, whether on RnB stompers like Let Me Be Your Lovemaker or on slow-burning soul and blues like This Ol’ World and Midnight Of My Life. The thought occurs during the opening guitar chords of Rain, which sounds strangely similar to Cindy Incidentally by The Faces, that the only thing stopping Marriott becoming the superstar Rod Stewart became was probably his truculent personality; certainly, in terms of gravel-throated soul singers, there’s little else to set them apart.

A few of the tracks here sound pieced-together from scraps: the bluesy piano tune Good Thing comes in at under two minutes and sounds incomplete, while A Minute Of Your Time also sounds like an unfinished demo with incomplete production. Marriott’s own Charlene could have been a Small Faces tune, and is easily good enough to have made it on to an official Humble Pie release. With Marriott and Ridley’s home-studio demos fleshed out by drummer Shirley and Dave ‘Clem’ Clempson – the ‘second-phase’ line-up after Peter Frampton left – and the addition of horns and keyboards, it’s a fitting addition to the legacy of an underappreciated band from the past.

You can find more about Humble Pie on their Facebook page and at this Steve Marriott website celebrating his life and music.