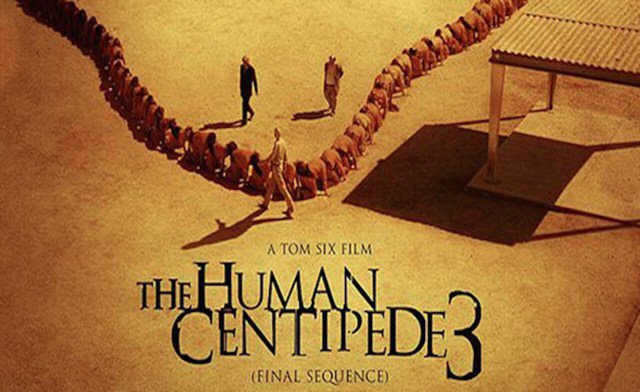 The first two films in The Human Centipede trilogy both earned reputations as being among the grossest movies ever made and the concluding Final Sequence is promised to “make the last one look like a Disney film.” Does Louder Than War reviewer Jamie Havlin have the stomach to watch it from beginning to end? You bet he has.

This is the kind of film that usually divides opinions radically.

A big majority of the public will likely despise it and see absolutely no merit in it. A small minority of gorehounds might claim that the majority are wusses with no comprehension of the transgressive genius of Tom Six and believe that Final Sequence is the Citizen Kane of taboo breaking.

The goal of The Human Centipede 3 is to be warped and nauseating on an epic scale and Final Sequence feels at times like a catalogue of the most grotesque incidents the director could come up: particularly vile rape scenes, water boarding, castration, murder, dismemberment and eating fried body parts (but I better not mention which particular body parts just in case you’re eating), not to mention the climatic human centipede.

I’m sure if the consistently repellent action of his film makes viewers feel physically sick then Six will be delighted. Job done.

At the heart of the film is histrionic prison warden Bill Boss, played by Dieter Laser. Boss is like a combination of every vile characteristic you could imagine in a human being, he’s a sadist, racist and misogynist for starters and definitely isn’t a huge advocate of human rights. I doubt any doctor would ever require him to take a test to determine whether or not he was a psychopath. The man is a monster.

Riots are commonplace in his George H.W. Bush State Penitentiary (no prizes for subtle satire here) and staff turnover and medical costs are sky high. In an election year State Governor Hughes played by Eric Roberts (who might want to have a word with his agent) demands improvements to be implemented or Boss will no longer be boss there.

Prison accountant Dwight (Laurence R Harvey) has an unusual brainwave though: his idea based on watching the two previous Human Centipede films with Boss – yeah, pretty meta – and which involves creating a 500 man centipede in the jail by joining inmates together in a lengthy row by surgically sewing together their mouths and anuses so, as he puts it to Boss, they will be, ‘literally on their knees begging for your mercy.’

As deterrents go this one really would make any sane person think twice before embarking on anything remotely criminal but Boss isn’t quite convinced, at first preferring to fantasise about bringing back a number of medieval torture techniques.

Eventually, though, after some very clunky exposition, an absurd amount of shouting and even more absurd plotlines usually involving torture, Boss reluctantly agrees to meet up with Six himself – I told you it was meta – who assures him that the idea of the human centipede is medically accurate and agrees that his idea can be borrowed as long as he can witness the surgery on prisoners at first-hand.

This film may well test the limits of what you feel able to watch. If you decide to see it your stomach will very likely churn. And then churn some more. And keep churning. Mine certainly did a couple of times and I’m someone who owns a copy of Driller Killer, and could just about appreciate Pasolini’s Salò, or the 120 Days of Sodom.

Six does occasionally show touches of directing skill and there’s some mildly amusing self deprecating humour too, such as when Boss watches the first two films in the franchise, telling Dwight they stink (this being just about the only time I agreed with anything he said) and when, after a screening for prisoners of the same Centipede films, one inmate screams that they should be banned (Daily Mail readers might agree with that one). There’s also a visually funny scene where Boss, prompted by Dwight, explains to the inmates the technicalities of the operations that they will shortly undergo, his face hidden behind a loudhailer.

As I said earlier, this is the kind of film that usually divides opinions radically but although it is undoubtedly gross and certainly lives up to its ‘100% politically incorrect’ tagline, everything, particularly Laser’s over the top performance, is just too cartoonish to take with any real degree of seriousness.

Six seems to have just tried too hard to shock to the point where, in the end, I actually I found it difficult to be offended by anything the caricature character of Bill Boss said or did. So, I couldn’t really claim to absolutely despise it but saw very little merit in it either.

Blu-ray and DVD Special Features include a documentary on the making of the film (the cast and crew seem a nice enough bunch of people) and an Alternate Ending.