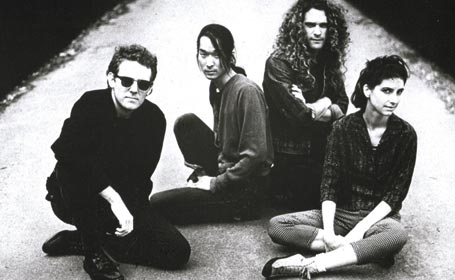 A cold autumn evening: October 1988. Glasgow Barrowland provides a familiar refuge from the wind and rain. A sizeable crowd has gathered to see That Petrol Emotion. The bar is busy, the atmosphere cheerful. As the support act take to the stage, there is minimal migration to the front. The musicians take up their positions, and at first glance something is not quite right. First of all, the band doesn’t appear to have a drummer. Even more worryingly, on closer inspection, much to the chagrin of the tousled assemblage of noiseniks increasingly impatient to get their rocks off, there’s no guitar. Suddenly, two bass guitars map out a crisscrossing rhythm one on top of the other, then an electric violin fills the expanse of the venue as exquisitely as if it were painting frescos on the walls of a yawning cave. There’s something strange about the singer too. She smiles. Then she begins to sing. Her voice is piercing. Elastic. Ecstatic. Then, rather disturbingly, she drags a steak knife across her neck. Few in the audience take any notice. Conversations continue over the music. Some bodies trudge away disconsolately looking for the bar. Furrowed brows are everywhere in evidence. But, randomly dotted around the ballroom, there is the odd silent soul, rooted to the spot. Transfixed. For those rapt few, it was as if the people on the stage had dropped out of the sky from another planet. 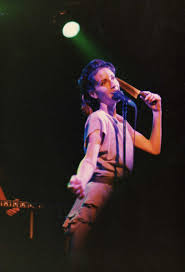