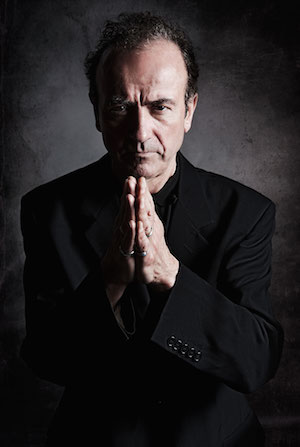 Live Review
“What day is it” asked Cornwell as he took to the stage. A stage that is seeing a steady succession of impressive acts visiting my local venue in Sale. From The Jam, Big Country, The Beat, Doctor Feelgood and other such bands have dropped by – and Hazel O’Connor is on her way.

It was a Thursday and we were about to spend a couple of hours trawling through days gone by – a chronological journey through the catalogue of both Stranglers and Hugh Cornwell solo albums with the former Stranglers frontman playing a track from each, accompanied with interesting facts and anecdotes.

We kicked off with a song that was submitted to EMI to be the first Stanglers single in 1975, only for it to be rejected and put back on the shelf for possible future use – I certainly didn’t expect to hear Strange Little Girl!

From then on, it was an enjoyable, informative, sometimes humorous and so so relaxing trip down Memory Lane. The eventual first single Get a Grip was up next, followed by Dagenham Dave – a tribute to a former Union Rep at Ford Dagenham.

When we got to the wonderful Duchess, Cornwell recounted the story about how litigation flowed from the release of If You Tolerate This by the Manic Street Preachers (obviously based on the asserted similarities between the two melodies). Cornwell remarked that he didn’t see the similarity and in any case, there were “only so many notes”!

And on we went – I was captivated and loved the stories and tales just as much as the playlist – it was during Duchess, by the way, that I realised for sure that at 66, Cornwell’s voice is still intact and sounding as good as it ever did.

Moving through Second Coming, Tramp, Never Say Goodbye and on to the classics No Mercy and Always the Sun – followed by some solo material such as Break of Dawn, Man of the Earth, First Bus to Babylon, Under Her Spell, Beat of My Heart. We finished with the masterpiece that is  Nice ‘n’ Sleazy and the massively successful Golden Brown.

After the gig, Cornwell was only too happy to meet and greet fans who queued for dvd’s, cd’s and autographs – although at one point during the gig, he made his feelings more than clear when it came to photographs being taken during the performance.

A great gig from one of the great original punks. Catch him at The Bedford in Balham in South London on Sunday December 13th.