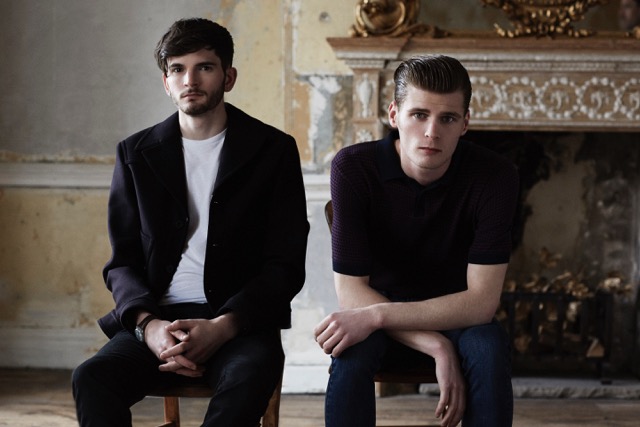 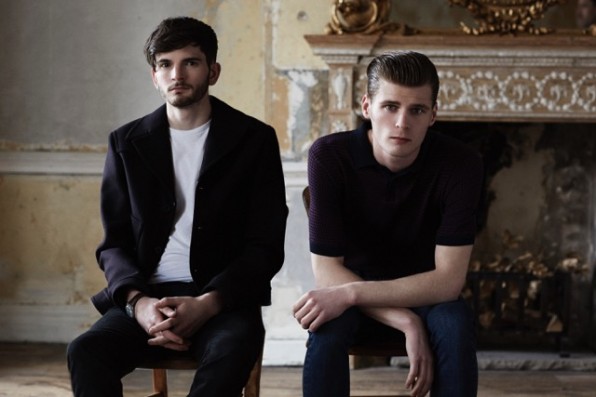 Dublin singer songwriter duo Hudson Taylor have a new album out soon, ‘Singing For Strangers‘. By way of lead up to that they played in Edinburgh last week, from where Harry Mulligan reports back.

It was surreal walking into The Caves in Edinburgh for the Hudson Taylor show, noticing that I was overwhelmingly surrounded by females.  It was their  first show on a mammoth UK and Irish Tour for them and it was  completely Sold Out.  The place was buzzing with anticipation and there was an unmistakable sexual energy.

However, the vociferous – fairer-sexed audience were hungry for the troubadour brothers to serenade them into the Scottish night.

They were not disappointed!

I looked around, soaking up the atmosphere, noting that this first class venue had obviously been selected for excellent Sonics and room equalization. Its cavernous stone interior was deadened with upholstery in addition to high tech ambient mics – telling me that we were being recorded.

Hudson Taylor opened the show with the percussive hand-clapping intro to ‘Just a Thought’.  It was dynamically charged, and immediately it was clear that here was a unit with a vocal excellence that surpassed the great majority of anything and everything new that I had  listened to in the past twelve months.

Harry Hudson Taylor whistled his way into ‘Second Best’ with the arrangement astute brother Alfy picking up where Fionn Regan left off, and both of them convoluting into beautiful two part harmonies that have been painstakingly worked out.  My heart soared, stick these guys in the Sistine Chapel…
‘Weapons’ – three songs in, hit me hard and resonated powerfully. I was struck by the emotional literacy in the lyrics and an almost spiritual truth embedded therein:

The songs spoke directly into the reality of all our relationships, not just with Lovers, but with parents, teachers, children, boss’, employees, and probably more than anything else, with our attachment to conflict and the inability to let go of our own precious hurts… 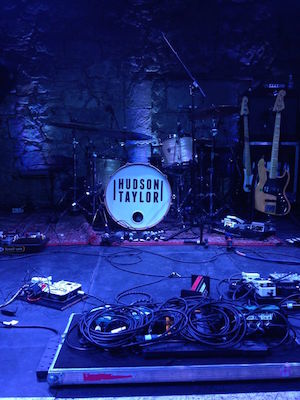 There’s an elephant in the room and my mind wanders to thoughts of the Troubles in Ireland – to my friend Gerry Conlon who died in the past year,  and who served a huge chunk of a Life-sentence, wrongfully convicted of the Guildford pub bombing, watched his da, Guiseppe die in a jail cell!

‘World Without You’, is introduced to the audience as the first single from their debut album ‘Singing For Strangers’.  For me this song describes the collapse of the ego-boundaries that come with falling in love… aches and all:

and then the chorus:

People talk about authenticity in music.  I talk about authenticity in music.  People tell me: ‘Harry, it’s not a good yard-stick to measure music with‘, or even better:- ‘authenticity’s over-rated.’  I like that one, although I disagree.  I know, perhaps it’s the Celt that I am.  Sometimes a song resonates in its authenticity in a way that only honesty verbalized can.  Hudson Taylor are not writing songs from some formulaic recipe.  If they are, then I’ll eat my own ears.  These lads are honest, fresh and have an innocence, and for me have been my personal discovery of 2015.  I realize how bored I am with Indie music and that whole Shoreditch thing that has had the arse torn out of it.

The penny drops as to why I’m surrounded by an almost exclusively female audience; the lads are fluent in the language of love, and I’m struck by an awareness that nearly all of these young women are mouthing the lyrics perfectly. Moreover and more to the point, I can dig it!

‘Drop in the ocean’, ‘Arrive’, ‘Prayer for the day’, and ‘Stranger’ revisit the vocal harmonies of Crosby, Stills and Nash, Simon & Garfunkel,and even great musicals like ‘Paint Your Wagon’, with a smoky campfire sing-along-feel that’s wonderfully and majestically wholesome. ‘

Beautiful Mistake’ is a song about a random, serendipitous encounter between a boy and a girl, and it goes a long way to restore a magic that’s been stolen by post-modern living that objectifies male & female sexuality.

Two-thirds of the way through the performance, and the power goes in the stage area.

Instantaneously, the room is left without amplification, a would-be event that would send many performers scurrying to  their dressing room until things were restored. Not Hudson Taylor or their band. On the contrary, the two brothers and their musically muscled compatriots capitalize on this as a Golden Opportunity too augment and increase the intimacy and communion they share with their audience.

‘How you’s up  there?’ Alfy enquires of the denizens in  the balcony. ‘You’ve got de best spot!’ he chuckles.

Hudson Taylor saunter their way through ‘Butterflies’ before embarking on the ethereal love song ‘Chasing Rubies’. This is an Epic song and the crowd sings along throughout:

The last part of the performance is a treat as Harry tells the audience that Edinburgh is the first stop on the tour that has completely Sold Out.

They finish the show with the colossal  ‘Battles’ – a song about the fight over a Lady, and the victory of Knight-like integrity.  Its Robin Hood over the Sherrif of Nottingham – all-over-again, and Maid Marion is the Prize.  Steady strumming, big bar chords, shimmering cymbals providing chiarascuro and shading.  I’m hearing, seeing, and kinaesthetically feeling this tune.  Endogenously, my Inner Warrior is shouting:

How a song can evoke feelings of vindication, honor and integrity just strikes awe into my heart.   Quite amazed that a Gig with mostly women in attendance can leave me feeling more of a man than the one that came in.

The first single from the album is called ‘World Without You’ and it’s released on March 30th but you can pre-order copy today right here! Release date for their debut album ‘Singing For Strangers’ is March 30th, 2015.

All words by Harry Mulligan, photos by Riagan Cook. More writing by Harry on Louder Than War can be found at his author’s archive.