The Hudson River Park free summer concert series in NYC began this year in it’s new location at Pier 84 with an eclectic trio of up-and-coming artists. Nearby on the water, the space shuttle Enterprise sat atop the Intrepid museum’s floating aircraft carrier to the right of the stage, a looming symbol of imperialism. 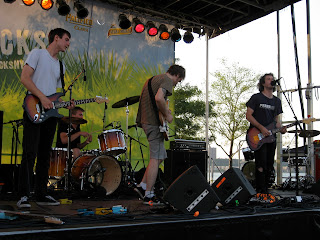 The first band to take the stage were Roomrunner, featuring ex-Double Dagger drummer Denny Bowen. Despite successive technical failures which had them cynically imploring the crowd for a guitar loan, or jokingly reassuring us “it’s all part of it”, they still managed to impress with their sludgy riff rock. Beneath the heavy, muscular guitar crunch and muffled fuzz of the vocals, there’s a marauding rhythm to their songs – a catchy, lunging groove that forces you to respond in appreciation with rigorous head nodding. Highlights included the pile-driving riff assault of “Super Vague” with it’s churning corkscrew twists of Sonic Youth style feedback, and the spiky, angular lurch of “Undo”. Definitely a band to keep an eye on.

Next up was John Maus (the one I’d been waiting for), Ariel Pink collaborator and creator of his own brooding, reverb saturated synth pop. Having just discovered his addictive solo output earlier in April despite already being a fan of the warped ‘freak folk’ of Ariel Pink’s Haunted Graffiti, I couldn’t believe my luck when this show was announced, and free, too!

Far from being your typical commodified pop star, Maus is a political science post graduate and holds an undergraduate degree in music composition, and in interviews he is a manically excitable explosion of dauntingly verbose yet empowering philosophies. Among them, a belief in the importance of sharing the experience of being here now and connecting with one another, to defy the mindless control of today’s capitalist power structure.

In spite of these lofty ambitions, his music is bereft of the flippantly obscure experimentation one might expect. Instead, he crafts densely layered, emotionally direct pop which soars with sincerity and majestic grandeur. Those who haven’t witnessed his live performances might be tempted to write them off as autistic karaoke (he sings, wails, punches himself, claws desperately at his shirt as if experiencing a heart attack, and pogo jumps along to his backing tracks), but as Maus explains, ‘the hysterical body’ is the ultimate expression of the language of pop, as every night he pushes his physical presence on the stage to the absolute limit.

He wastes no time once he appears on the River Rocks stage. “Castles In the Grave”, a 2010 demo which has been polished for his new ‘A Collection of Rarities and Previously Unreleased Material’ release, sees Maus spasmodically bending to the beat in a kind of hunched Quasimodo posture, his face drawn taut beneath his constantly flopping hair. He grits his teeth, pulls at his hair, knots the fabric of his jeans in his hands and throws an almost involuntary tourettes-like punch to the side of his head then starts screaming, a sudden detonation of frantic, urgent howls peppered with the odd 4 letter word utterance, and the thrilled audience screams with him. 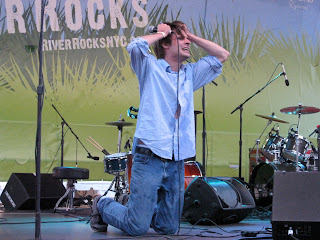 Maus quickly moves along, and the bounce of a drum machine signals the start of “Maniac”. He seems on the verge of hyperventilating, his eyes bulge, uncontrollable tics send more blows to the side of his head from a hand which now seems possessed like something out of the 1946 horror classic The Beast With Five Fingers. He chants along to the gloomily purred vocal loop, “Yeah yeah yeah yeah, I’m such a maniac/you’re such a maniac/we’re fucking maniacs, we’re fucking maniacs, ooooohoooh” and the crowd goes berserk as a snazzy shriek of synthesiser blasts through the verse.

He tips some water over himself and we are treated to the bizarre “Rights For Gays”, a floating shimmer of synths which comes off lyrically as an equal opportunities policy proposal, with the catchy repeated mantra of “Right now, rights for gays, oh yeah/And medical care for everyone!”. If he were running for president, he’d have my vote!

Then comes the first John Maus song I ever heard, “Do Your Best”, an exquisitely moody echo-swathed piece of forlorn romanticism complimented perfectly by his deeply resonant low baritone. Here again in the lyrics, themes of connecting with others reinforce his musical objectives and the pursuit of pop’s maximum emotional expressivity. “Reach out your hands to the one alone, in the city tonight”. Maus fist pumps and gazes intently into the audience with a purposeful glare in his eyes as rapturous cheers erupt from all sides.

Other songs included the lovely twinkling arpeggiated synths of “Streetlight”, the thumping bassline and stunning Wendy Carlos-esque keyboard solos of “My Whole World’s Coming Apart”, and “Keep Pushing On”, during which he leapt down from the stage to pogo and headbang in front of the barrier, clutching at his chest as if going into cardiac arrest. He lifted himself, swung his legs over and scrabbled back up onto the stage, and without taking a breath, continued to bounce, his arms stabbing out into the air every now and then in sweeping emotive gestures. By now I noticed some clothing casualties from this frantic and tortured visceral display – one of the buttons of his shirt had come loose, and the zip of his jeans had also almost completely unfastened (steady on, ladies!).

He finished off with the glorious, god-like ascent of the anthemic “Believer” from ‘We Must Become the Pitiless Censors of Ourselves’. With arms outstretched, he yelled and whipped his hair around, swinging from side to side as if stuck on a giant spring, then stomped around the stage to stand with his knees locked together, a tangled ball of raw intensity. And with a final head smack he walked off the stage with the programmed sounds still pulsing after him and echoing in everyone’s ears. This mesmerising and enigmatic performance was somehow utterly invigorating, with John Maus almost becoming a messiah figure of pop, resurrecting our primal connections with confoundingly simple yet deeply thoughtful music, and with eachother as human beings as well. Afterwards I was buzzing, I just knew I’d witnessed something phenomenally special. Go see him!

Stocky, bearded and bespectacled electronic geek Dan Deacon rode out the rest of the evening with a memorable set broken up by his clumsy yet well meaning monologues coloured by his absurdist sense of humour, taking on touchy subjects like the Occupy movement, corporate greed, and smoking in the park (although most people didn’t give a shit and kept smoking, this is New York!).
Behind his own small lighting rig and trademark ‘trippy green skull’ stage prop, he remarked on the dizzying steepness of the high stage, preferring to play solo at floor level with his gear set up on a low table surrounded by the crowd. Tonight his usually streamlined stage ensemble featured two drummers for an even denser noise. 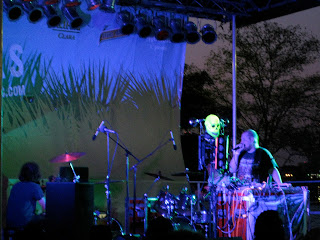 Deacon’s style is a hyperactive mash of hypnotically repetitive breakbeats and lilting keyboard loops accompanied by his ever present chipmunk vocal filter, reminding me of a quirkier Holy Fuck or Fuck Buttons. He seems skilled at building celebratory orgies of sound, as the songs are well planned dance collages with ecstatic, shiny melodies cutting through the epileptic crash of beats in a way that will leave ravers and indie fans alike feeling fully satisfied and reaching for a post coital cigarette. Depending on what mood you’re in, it might seem monotonous or headache-inducing at times, but Deacon certainly knows how to entertain.

The first 100 people to visit the merch stand got a free Dan Deacon flag promoting his forthcoming album ‘America’. He encouraged those in the audience to “fulfill his narcissistic dreams” and wave the flags, commenting dryly, “This is what the internet was made for”, before snapping a photo on his Smartphone. This was the first (and most straightforward) request of the evening, and I was glad I moved away to lean against the steel crowd control gates as Deacon gave long, rambling instructions to form a wide circle, creating a dance-off pit in the middle of the floor space. He would then split the crowd into teams, “This side is gonna dance like the movie Avatar was actually any good, and this side is gonna dance like the mom in the movie Big”. Chaos momentarily broke out when he ordered, “Run as fast as you can, as far as you can”, and bodies darted off frenziedly in all different directions like they were fleeing a fire. He played the standouts from ‘Bromst’ as well as the propulsive, simmering static of “Lots” and the delightful alien pop of “True Thrush” from ‘America’.

Deacon then wound things down by graciously thanking staff involved in putting on the free event series (they receive no government funding so it’s all donation based), and seems almost as big a John Maus fan as myself, spouting effulgent praise between songs, “He’s a beautiful, beautiful person, an amazing musician, inspiring performer, and an excellent man”. When the last song finished, he did his best to disperse the stragglers still hungry for more, “That really was it…You can go home now.”

And the slow, painful comedown to normality began – until next time!

The upcoming River Rocks concerts will feature Oberhofer and The Soft Pack this Thursday, July 26th, and conclude with the spectacular lineup of DIIV, Wild Nothing and Grimes on August 9th.